After an inspirational Opening Ceremony on Friday 11 May 2012, involving aerial acrobats and Barcelona’s best young Optimist sailors, the much awaited Barcelona In Port Race got underway today in Port Vell, right in the heart of the city.

Friday night’s Opening Ceremony of the 2012 470 World Championship also marked the opening of the brand new Barcelona International Sailing Center, that will showcase itself with the Championship.

Before declaring the Championship open, 470 Class President Stanislav Kassarov addressed the sailors, “For many of you, the 2012 470 World Championships marks the conclusion of your 2012 Olympic dreams as you aim for your nation qualification and team selection. For others, the World Championship is the opportunity to participate at the most challenging 470 event of the year and compete against the best teams from around the world. I wish each of you every success, fair winds and outstanding sailing.”

Today’s Barcelona In Port Race was targeted to present the 2012 470 World Championship to the citizens of Barcelona and provide a platform to showcase the world’s top sailors in a new fun, short course format.

Port Vell is a perfect arena for racing, with the prize giving held onshore right at the end of Barcelona’s iconic Las Ramblas. Numerous spectators gathered to watch the racing and enjoy the entertainment, accompanied by Catalan and English commentary. 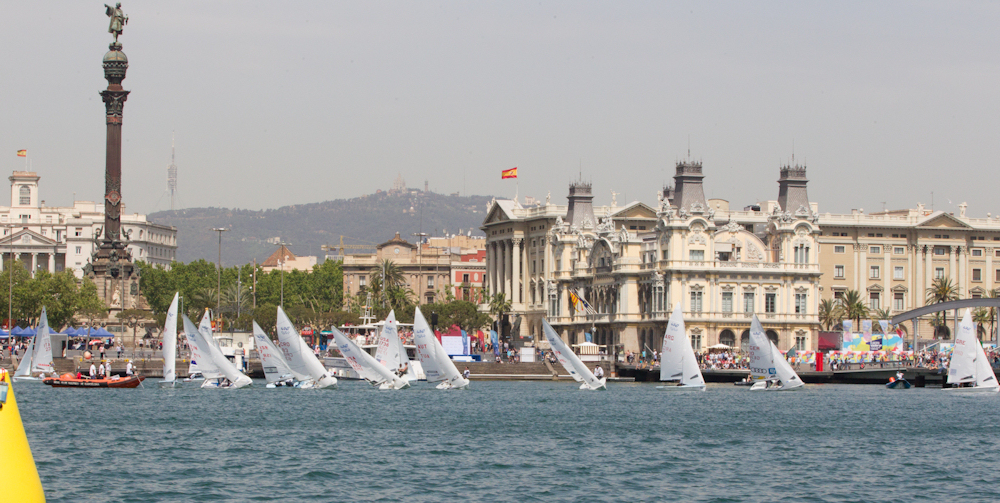 Stunning blue skies were supported by a light breeze, and with Rule 42 turned off it was almost “no holds barred” racing. For the teams competing, the Barcelona In Port Race was a new experience, racing in a new short course format, which was received with great enthusiasm and received a thumbs up from all.

The 470 Men were on track first and racing at 1215 hours, with the host nation’s Onan Barreiros/Aaron Sarmiento leading from start to finish, no-one else had a look in. 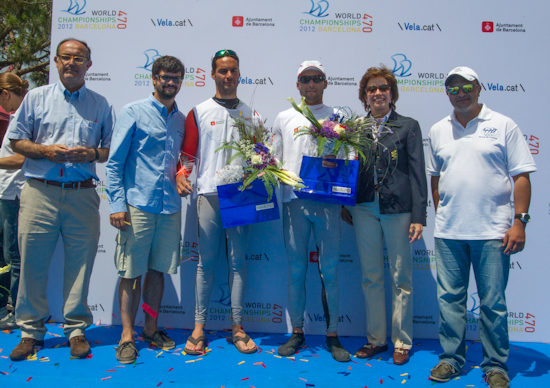 In the 470 Women, Israel bit the bullet from the start, although almost found themselves in a wind hole around the first mark, but with a bit of extra pumping pulled through, with the Italian pair of Giulia Conti/Giovanna Micol chasing hard.

Teams were shuttled straight to the shore in ribs and presented with prizes including trophies, Swatch watches and commemorative bibs. 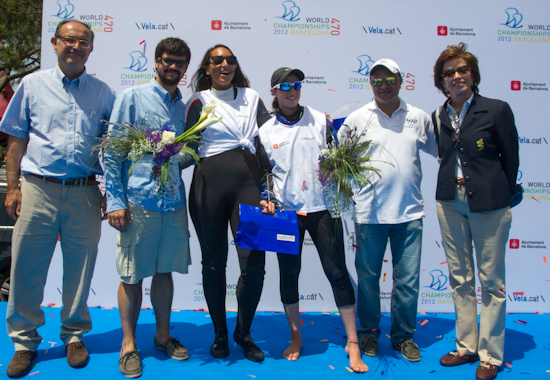 Registration and Equipment Inspection are now complete, with 149 teams from 42 nations confirmed as racing. Racing for the 298 sailors gets underway at 1200 hours on Sunday 13 May 2012 across two course areas. The 54 entries in the 470 Women event have been split into two fleets, with the 95 Men’s teams split into three fleets. Fleet allocations have been assigned by a seeding committee based on world ranking and past performance. Read our Championship Preview for an insight into the top teams.

A last minute entry from Jordi Xammar, the 2011 ISAF Youth Sailing World Champion in the 420 dinghy event, who is sailing with crew Santi Mas was great to see, as he competes in his first 470 World Championship.