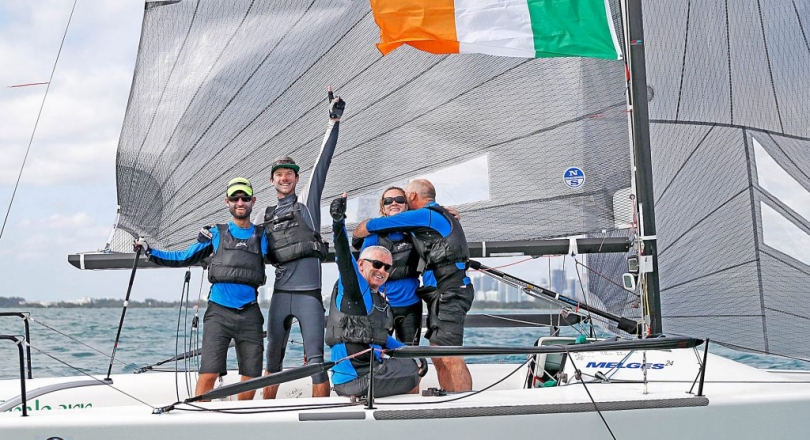 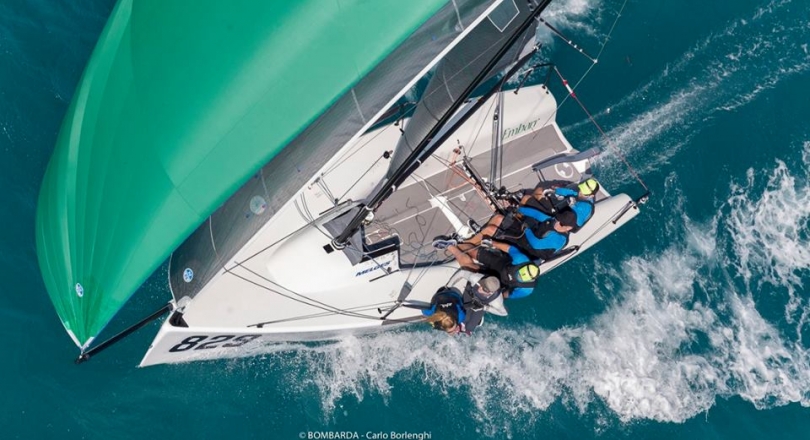 The 470 partnership of Stu McNay/Dave Hughes have taken their winning formula to the Melges 24 Worlds, taking an outstanding win on Embarr, together with owner Conor Clarke, Maurice O’Connell and Aoife English.

Racing in Miami, 28 November-3 December, the Melges 24 Worlds attracted a strong line-up of competitors racing in the overall and corinthian divisions. An impressibely consistent scorecad from the team on Embarr handed them the title by a massive 31 point margin and without needing to race the final race.

As a result of an amazing Championship, with all results, apart from won within the top 5the Irish team of Embarr IRL829 was crowned the 2016 Melges 24 World Championship.

The crew showned extreme solidity and consistency all through the races, fascinating everybody for their asset and conduction of the boat in the downwind legs, that allowed them to take out amazing recoveries even when the starts hadn’t been so good.

We work physically very hard downwind, hiking as if we were sailing upwind and this gives a great help to us, especially when you have wavy conditions as it has been during this World Championship," said the owner of Embarr, Conor Clarke, who went on explaining how to about the technicalities. "Of course we have good sailors on board, our Olympians are amazing, but it also about attitude and knowledge of the surroundings. We’ve been in Miami for a while trying to understand the local conditions and benefit at the most from them. We’ve worked hard and our dream has come true,” Clarke concluded.

With a gap of 31 points, Maidollis 3 ITA822 (5-15) by Gian Luca Perego, that was having on board the couple of former Melges 24 World Champions in 2012 Fracassoli-Fonda at helm and tactic respectively plus Giovanni Ferrari and Stefano Lagi, ensured the second position in the overall ranking, with a total score of 69 points. Third place went to Brian Porter’s Full Throttle USA849 (8-2) with Andy Burdick, Sam Rodgers and Matt Woodworth in the crew, that managed to surpass Monsoon USA851 (3-7) that had the same overall score but worse partial results.

Disappointment filled in for Bora Gulari’s Air Force One/West Marine Rigging USA820 (1-75/DNF) that, after having won the first race of the day, was still in place even for the second place on the podium, but got a BDF in the last regatta of the series, in this way slipping to the fifth position overall. It could have been a better World Championship also for Chris Rast’s EFG SUI684 (13-8), World Champion in 2015 and European Championship in 2016, who didn’t though manage to show all its potentialities and closed the event with an overall 13th place.

The Italian team Taki 4 ITA778 (1-7) secured its victory in the Corinthian division, exactly as it has been for Embarr, after the eleventh race of the series, disputed this morning in conditions of moderate and shifty breeze that forced the Race Committee to interrupt the race a few minutes after the start.

The crew of Marco Zammarchi kept working hard after the third place obtained in the Europeans of Hyeres and sailed very good races all through the World Championship, showing an amazing ability to adapt to the different sailing conditions of these days. On board of Taki 4 were sailing together with the owner: Giacomo Fossati, Matteo De Chiara, Niccolò Bertola and Giovanni Bannetta, with the support of Niccolò Bianchi as coach.

Only during the twelfth and last race of the series it has been possible to determine the rest of the podium of the Corinthian division: second place eventually went to Tõnu Tõniste’s Lenny EST790 (5-6) with Toomas Tõniste, Kalev Tanner, Maiki Saaring and Andres Rohtla in the crew, World Champion in 2015 and European vice-champion in 2016, while third place went to Megan Ratliff’s Decorum USA805 (2-11). This last crew by Megan Ratliff was also awarded as best female-skippered boat of the event and in this crew were sailing Megan’s brother Hunter Ratliff, Zachary Hernandez , Alex Simon and  Christopher Stocke.

The event found its conclusion with the prize giving ceremony that took place in the Jungle Island Plaza, at the attendance of many crews. After a few days of rest, the organizing machine will be activated again, already thinking about the 2017 Worlds of Helsinki. In the meantime, it has been announced that the 2018 edition of the Melges 24 World Championship will be held in Canada: there are very positive future perspectives for a class that seems to have found its rebirth.