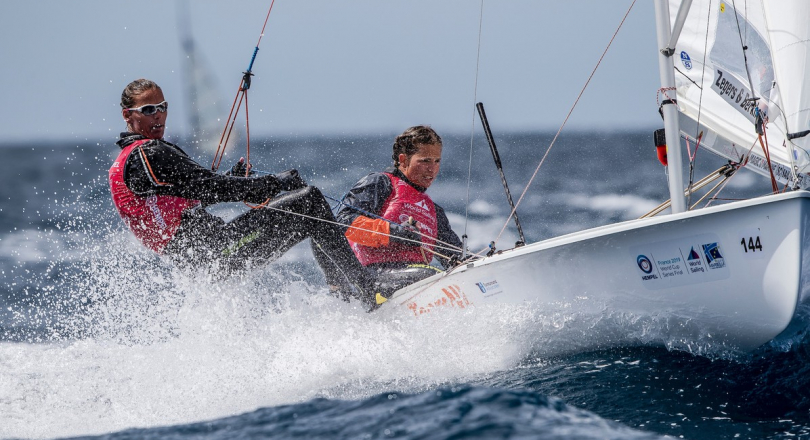 Already selected by the Netherlands to compete in the 470 Women's class, Afrodite Zegers and Lobke Berkhout were looking forward to their first Olympic Games as a team.

Berkhout, who won silver in 2008 and bronze in 2012, was tempted back into Olympic sailing by Rio 2016 Olympian Zegers, who was looking for a crew to launch a campaign for Tokyo 2020.

The events of the past few months during the global COVID-19 pandemic would be enough to test any new team, with their ultimate goal now another year away.

Good friends both on and off the water, the pair stuck together during lockdown and were back out sailing as soon as they were able to.

"During the coronavirus time, we started sailing when it was allowed from the National Olympic Committee," explained Zegers.

"We focused a lot on our communication and [teamwork], as it is very unknown when we'll have races."

"It's a really uncertain period but we make the best out of it and we stay really positive," added Berkhout.

"I think as a team we have grown a lot during this period.

"We took each other through these tough times, and we believe this will only make us a stronger team."

And Zegers and Berkhout have recently put that to the test against several German 470 Women's teams, who joined them temporarily at their Dutch base in Scheveningen.

"As the rules get more flexible, we are working to a programme towards the Games in 2021," continued Berkhout.

"The German teams are here to help us and work together.

"After this, we are looking into the possibilities to continue and make a great programme for the coming year towards the Games."

In a new feature alongside Hempel, Official Coatings Partner and title partner of the Hempel World Cup Series, called "Trusting the Process," we'll be checking in on our Olympic sailors, finding out how they continued to train during lockdown, and how they will prepare for the rearranged Olympic Games in 2021.