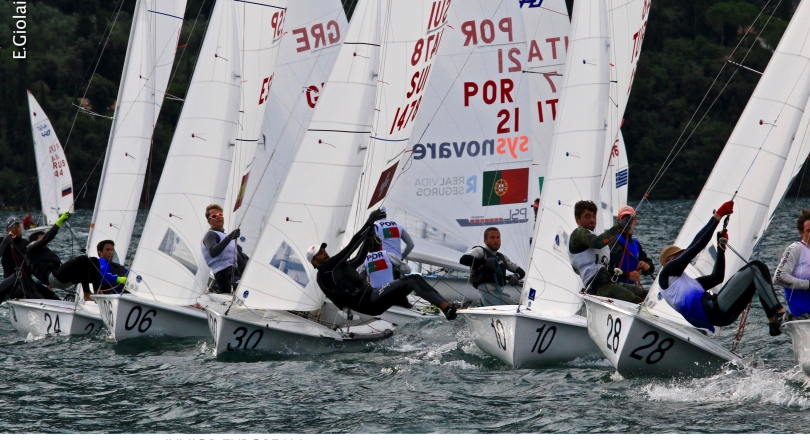 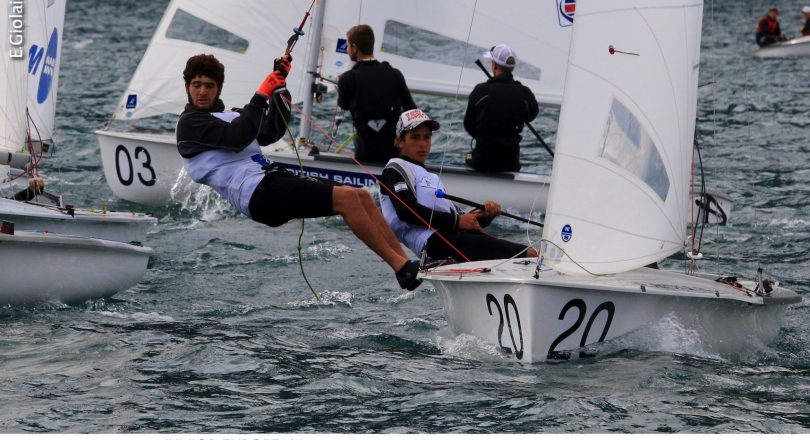 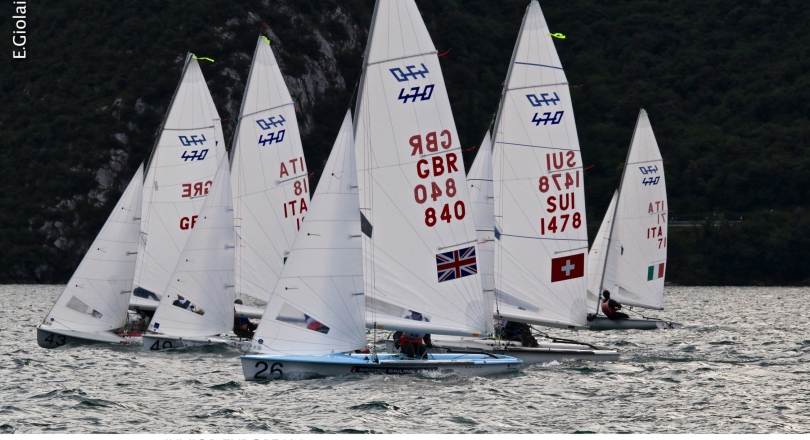 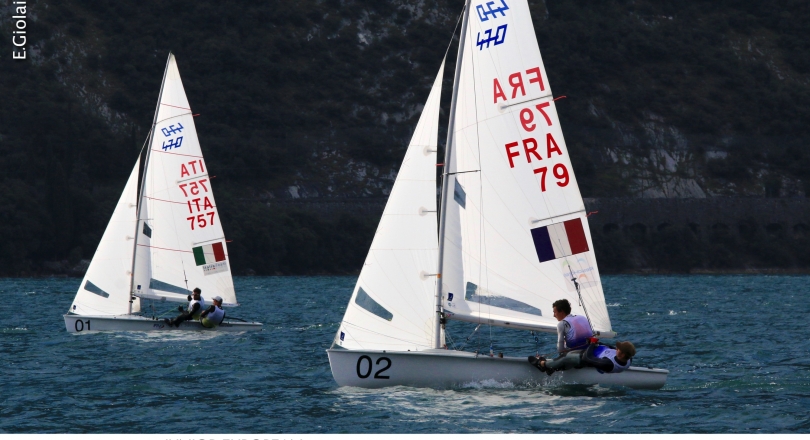 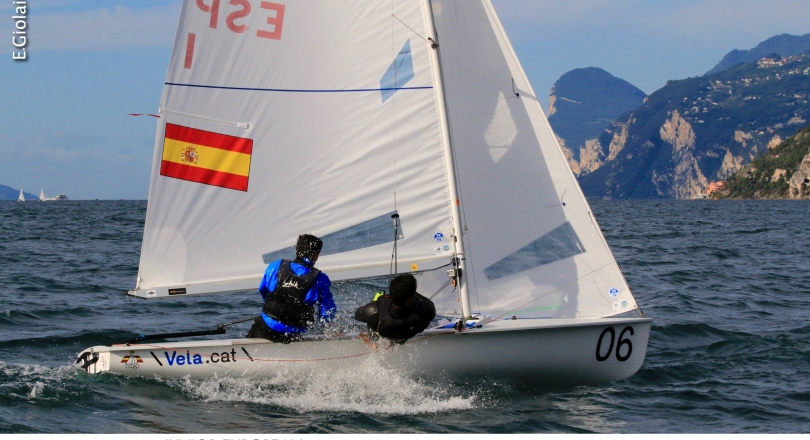 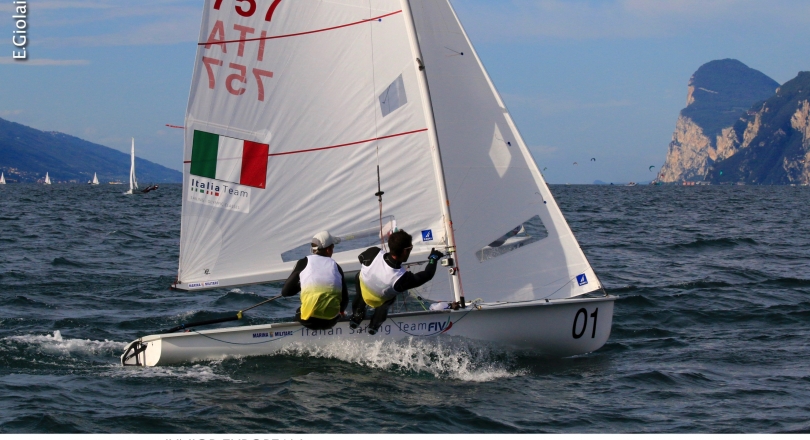 Race day 4 and the 470 Class hit the race track early for an 0800 hours start in the hope of getting back on track after missing a day of racing yesterday.

The day opened with a 12-16 knot breeze, that progressively got lighter forcing races for all fleets to be abandoned as the wind dropped to zero. A brief wait on the water and racing was soon back on for the 420 teams on course area alpha, located closest to Fraglia Vela Riva, and the 470 fleet further south on bravo course.

Conditions were anything but “Lake Garda like!” though, turning convention on its ahead as to which side of the race track would pay, as the wind flitted around the course. The day ended with a 5-7 knot shifty breeze, and boats gently crossing the finish.

Four hundred and sixty eight talented young teams from 25 nations around the world are racing across the 470 Men, 470 Women, 420 Open and 420 under-17 fleets. Supporting the natural transition from the 420 Class to the 470, the two classes have hosted the combined Junior European Championship for many years

470 MEN
The fifty-five team 470 Men fleet, aged 23 years and under, is contesting a 5-race qualification series to decide the boats which will advance to the 6-race gold and silver fleet racing, ahead of the Medal Race.

Two races down on opening day and defending Junior European Champions Giacomo Ferrari/Giulo Calabro (ITA) started strong in the yellow fleet, knocking out an opening pitch win, and following up with a second to lead by 1 point after day one.

“It is very important for us to win, but we will see as we are not expecting a good week of weather,” commented Ferrari. “Today’s two races were crazy wind, very light and very shifty, sometimes the left was good and then the right.”

France’s Hippolyte Machetti/Sidoine Dantes finished in 4th overall at the recent 470 Worlds, ranking as the top junior team, and proving that was no fluke the pair steamed into the lead in the opening race of the blue fleet. But their time out front was shortlived as Hungary’s Balazs Gyapjas/Zsombor Gyapjas closed in on the final leg of race one to seize the opening win.

They credited their remarkable comeback to fierce downwind pumping and race strategy, which pushed the brothers back through the fleet as they hunted out the shifts, and clambered back to 2nd overall by the gate. They upped their pace even more to edge into the lead, but all change in race 2.

“We expected in the second race the wind would go more to the right, but actually it didn’t happen, and it went left,” added Balazs.

The wrong choice left them crossing the finish line in 15th, to end day one in 11th overall. “We expected the normal thermal wind, but it was different, as the wind came from the left and was really shifty and gusty," continued Balazs. "Hopefully tomorrow we will get the normal wind!”

Onto race 2 and Machetti/Dantes again had the pace off the starting line, this time holding onto victory, to sit in second overall behind the Italians. Third to Maor Abu/Yoav Rooz (ISR) in the overall standings from a 3,4 scorecard.

“It was very difficult, as the conditions were very different from the other days we trained here,” explained Abu. “It wasn’t the classic Garda, with a strong southerly. For sure it wasn’t easy to get our results, but we had our eyes open and saw the changing wind.”

Three races are scheduled for the 470 Men fleet on Wednesday 9 August.

“The wind was always changing and the gusts were not consistent,” said Kaynakci. “It was a hard day but we are happy.” The pair trumped the competition in race 2, as their beady eyes spotted the small wind changes at the pin end, where they started on their own and port-tacked the entire fleet.

“The wind was really tricky, so we had to be very careful about it and always check it,” added Aslan. “Just a few minutes to the start we realized the pin end would be best, and we took the chance and didn’t let go.”

Italy’s Benedetta Di Salle/Alessandra Dubbini are defending their 2016 470 Junior European Championship  title on the very waters where Dubbini started her sailing career, but their race track deliver was not up to their usual high standards, scoring 27, 11 to sit in 22nd overall on the leader board.

“We are proud to be here on Lake Garda, where I grew up,” explained Dubbini, whose hometown Torbole is just a few kilometres to the east. “We will try to defend our title, but it will be hard as there are a lot of very good teams. We will do our best, but today wasn’t very good.”

Three races for the 470 Women are scheduled on Wednesday 9 August.

420 OPEN
One hundred and nine boats are racing in the 420 Open fleet, for teams aged under 19 years old, which pitches boys, girls and mixed teams up against each other. The fleet is split into yellow and blue for the six race opening series, before advancing to gold and silver fleets for the six race final series.

For Ascencios/Chisari, their 1,2 finishes all came down to starting technique. “It’s pretty hard to get off the line,” reflected Ascencios, “but once you get off the line, work to the sides and get to the right with a clear lane, it is pretty easy when you are at the front of the fleet.

“After I got a clear start I really looked around the course for the puffs and that really helped me get to the pressure, which was why we were successful today.

“It’s really awesome sailing here. The weather is amazing and the lake is beautiful.”

The pair finished 14th at last month’s 420 Open Europeans in Greece, and are eyeing an upgrade to a top ten finish in Italy.

There is no easy racing here on Lake Garda, as demonstrated by Germany’s Daniel Gottlich/Linus Klasen who scored an impressive 2nd place in race 1, following up with a disappointing 48th in race 2 in the yellow fleet.

“We started in the middle of the line and played the fleet, and that was it,” explained a concise Gottlich on their opening success, before commenting on their race two shocker. “Our start wasn’t actually the best and we had difficulties crossing the line because of the current and low wind, and were behind the fleet. The right side of the upwind was favoured in the first race and we tried to get there in the second one, but this time the left was better, and so we struggled on the right behind the fleet and had no chance to comeback. We can’t afford to have another race like that, and we just aim to start conservatively tomorrow.”

Two races are scheduled for the 420 Open fleet on 9 August.

420 UNDER 17
Portugal’s Pedro Coelho/Diogo Sampaio led from start to finish in race 1 of the under 17 fleet, following up with an 11th place, to end their day in 3rd overall.

Consistent form of 4,2 from Tommaso Salvetta/Giovanni Sandrini (ITA) puts them into the lead. Greece’s Ariadni-Papaskevi Spanaki/Myrto Papadopoulou were the top girls team in the under-17 fleet at the 420 Open Europeans last month, and again look to be targeting a repeat, as they sit in third and top girls team.

While experienced teams are battling it out at the front, newbies are finding their feet and gaining experience of big fleet racing. Racing his first ever 420 Championship is Ireland’s Morgan Lyttle, who is partnered up with Patrick Whyte. Lyttle is on a steep learning curve having stepped into the 420 from the Optimist in September last year, whilst Whyte had some knowledge of what to expect after his appearance at last year’s 420 Worlds.

“It is exciting and terrifying at the same time,” admitted Lyttle. “The starts were very packed and congested and it was hard to get off the line, but we fought for our gap, tacked early and then had to be aggressive to get our lane.”

“We came to experience, learn and improve,” added Whyte. 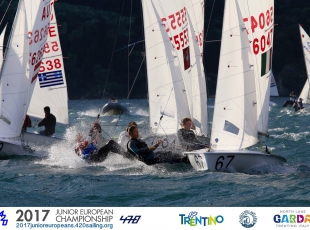 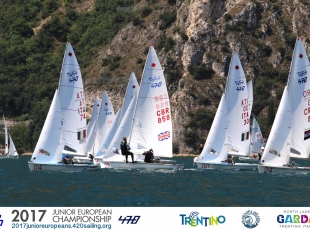 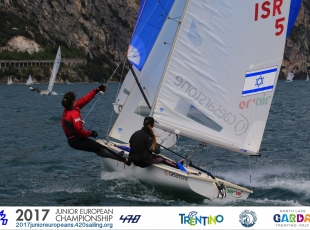 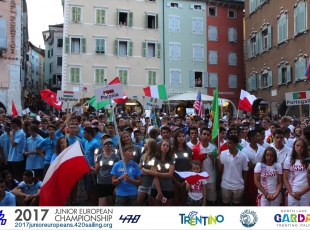 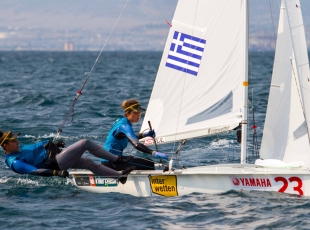 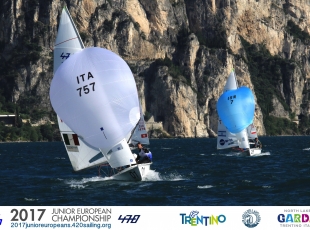 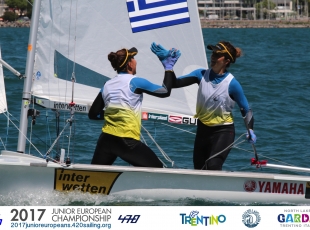