Waiting for the wind, second day races were postponed for four hours in Thessaloniki bay, host venue to the World’s best junior 470 sailors.

A little after 4 pm the local thermal sea breeze ("boukadoura") came in with an intensity of over 6 knots and an hour later, as soon as the race had started, it built to 8 kts to reach up to 13 kts, to last until the end of the day.

The schedule was completed with six races, two for each fleet (Men Yellow, Men Blue, Women). Final day of qualification for 470 Men’s fleet, to decide the top 30 teams advancing to gold fleet and a chance for the podium. 42 women’s teams continue on racing for a spot in the medal race.

The weather forecast for the next days will employ the race committee as the heat wave and the lack of winds constitute a threat to the races. Late afternoon racing may be a solution.

Sitting on the edge of qualification, Hong Kong’s Sui Lun Tse and Ho Yin Tsik delivered in the first race of the day, with a safe 12th place keeping them inside the cut. Same for South Africa’s Brevan Thomson and Josh Rubenstien who are competing at their first 470 Junior World Championship.

In the blue fleet, Hungary’s Gyapjas brothers knocked out a bullet at the 1st race of the day, establishing themselves as the ones to beat. Another solid performance from Calabro and Ferrari of Italy while Spain’s twin brothers, David and Alex Charles scored a bullet in the yellow fleet.

The breeze built during the day, so full on trapeze racing for the fleet, and close boat-on-boat tactics. The totally different weather pattern compared to yesterday favoured the Greek pair of Bozi and Klonaridou in the women’s fleet who scored a bullet in the 1st race.

At the end of the day, satisfaction was evident among the fleet for the appearance of the breeze, even late in the afternoon. "Conditions are very difficult, but we’ll make it" said Maria Bozi, from Greek crew.

Third day schedule is packed with 3 races for the golden fleet, and the women continue racing in single series. 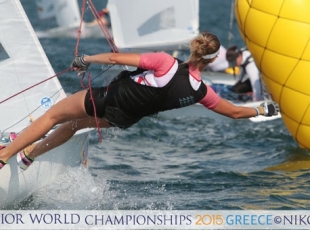 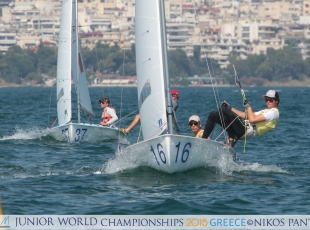 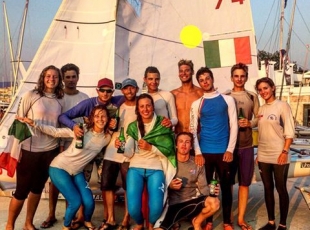 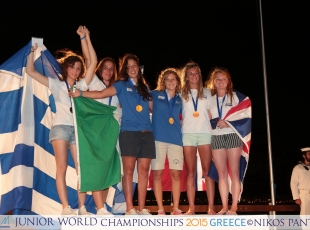