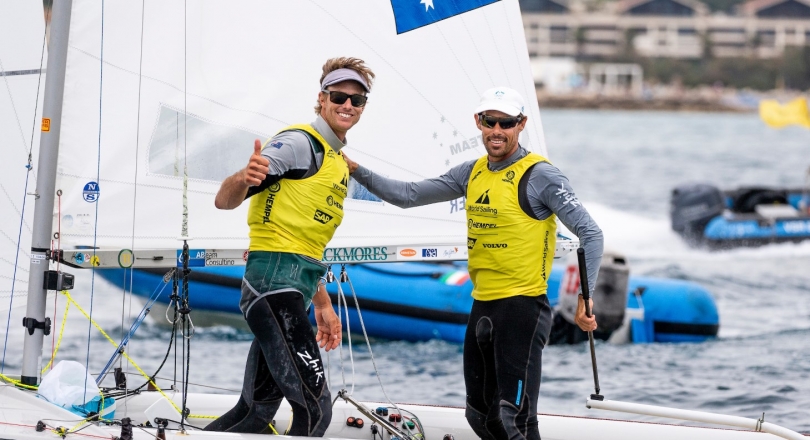 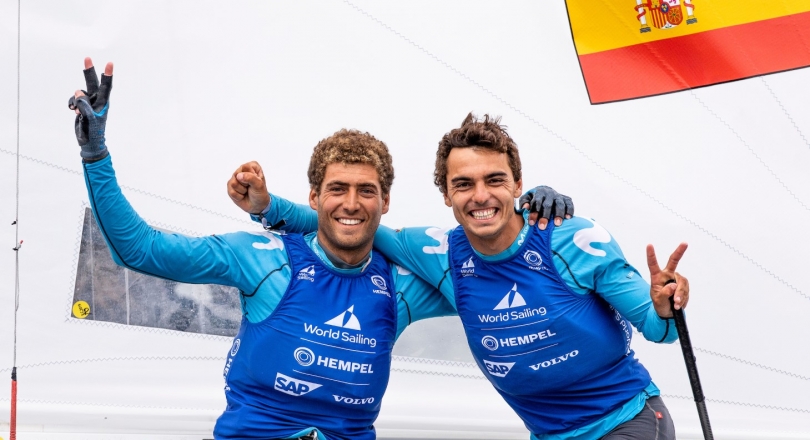 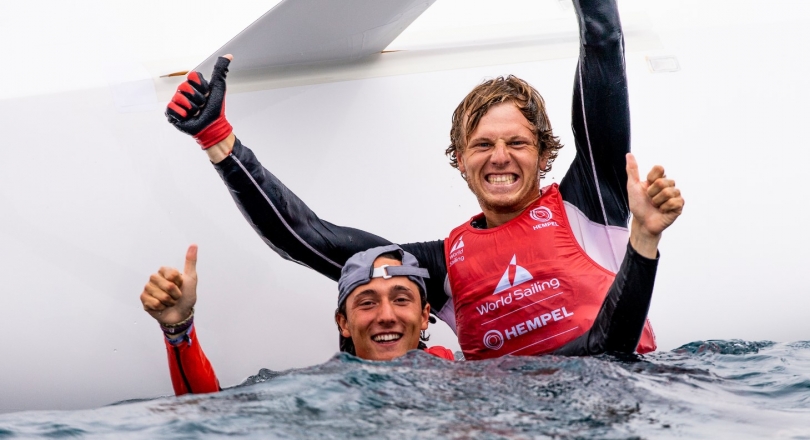 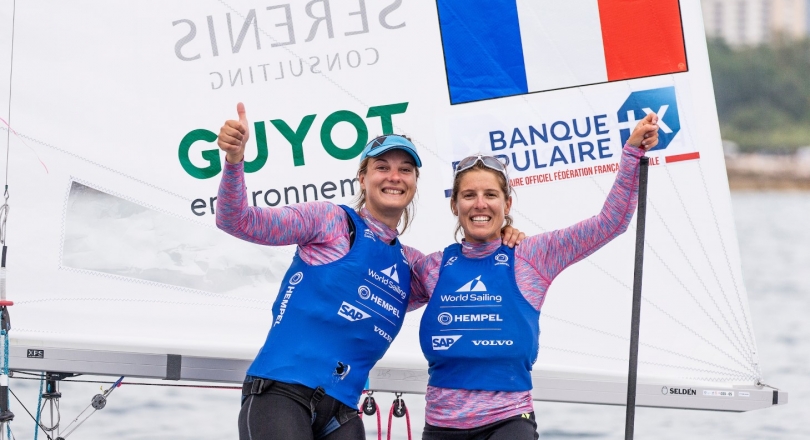 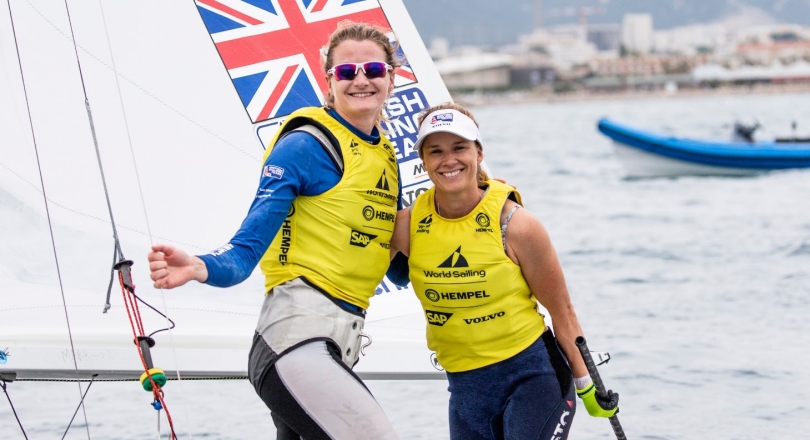 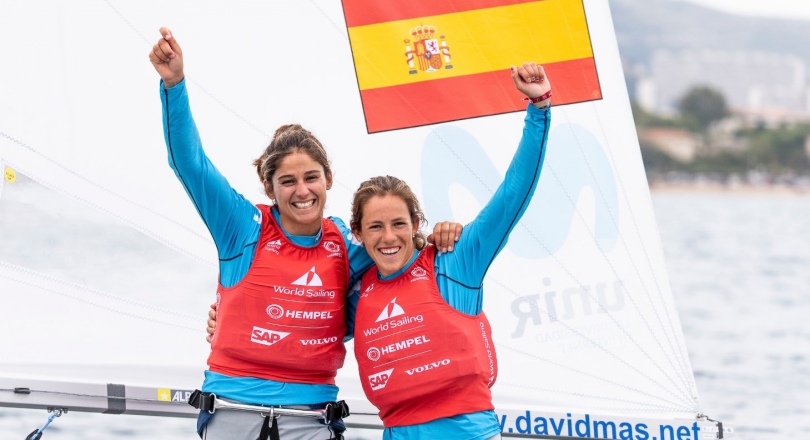 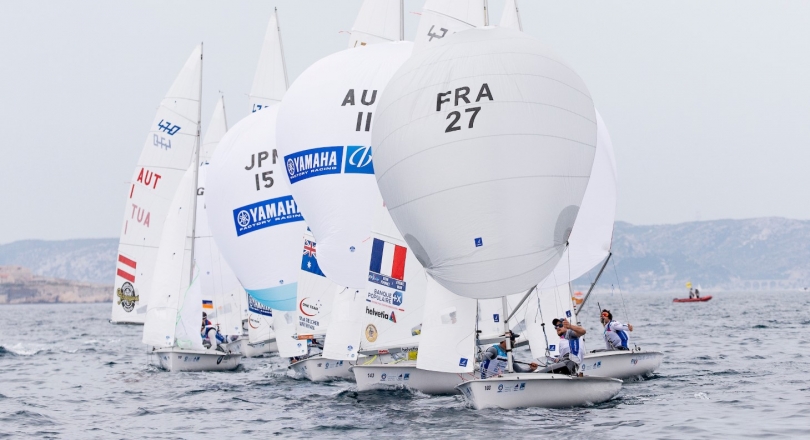 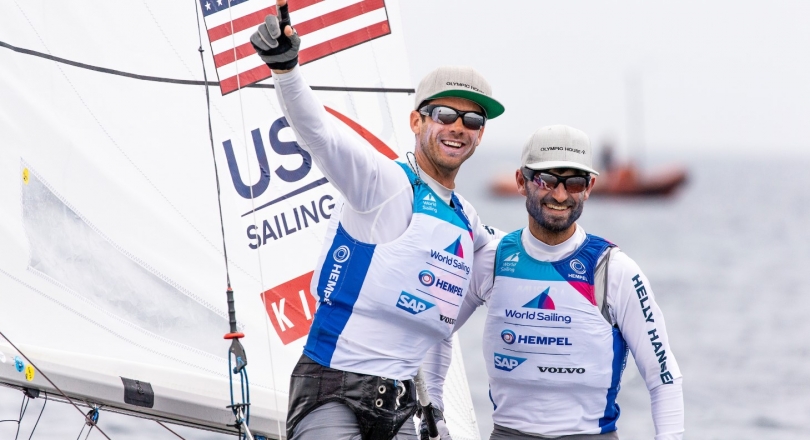 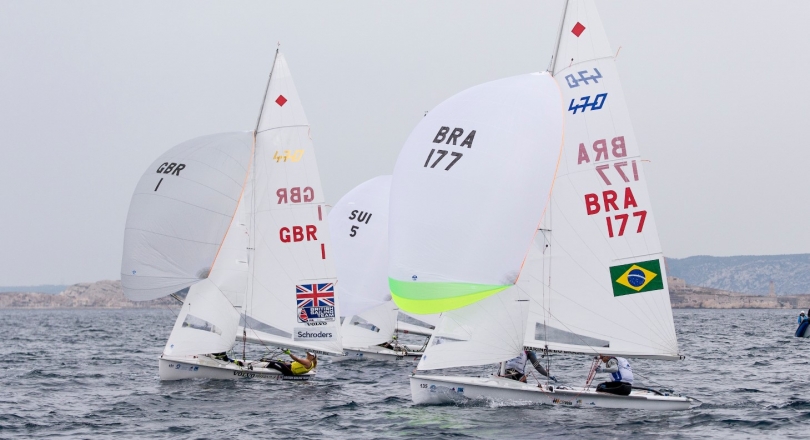 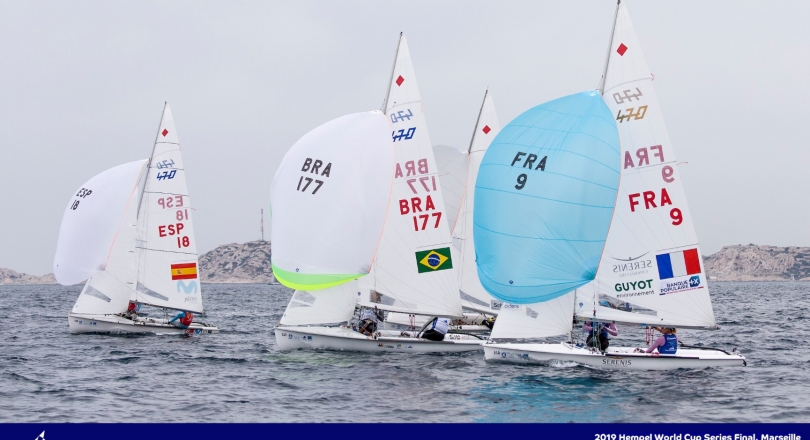 Marseille was plagued with a light fickle breeze on the final day which was only deemed suitable for racing at 16:00 local time. By the time a 6-10 knot north west breeze came in, only Men's and Women's 470 class was allowed to complete their medal races within the allocated time slot.

Gold medals and the Hempel World Cup Series titles in the Men's and Women's 470 went to Mat Belcher and Will Ryan of Australia and France's Camille Lecointre and Aloise Retornaz.

The full Medal Races will be available to watch back here.

The best race was saved for last in Marseille as Camille Lecointre and Aloise Retornaz (FRA) and Hannah Mills and Eilidh McIntyre (GBR) faced off in the Women's 470 Medal Race at 16:30, the cut-off time for races to start.

Just one point separated the teams ahead of the Medal Race and with enough of a points buffer between themselves and the chasing pack, whoever beat who over the finish line, no matter what position, would win gold.

As expected, the pair match raced at the start with each team looking for the initiative to put themselves ahead and in pole position for gold.

The French grabbed the initiative at the start and managed to loosely cover the British team early on in the first upwind as both teams fought hard for a speed advantage. The French kept the British team close by and whilst there were occasions where they were separated, the French never let the Brits out of their sights with several tacking duels on the upwind.

At the first mark, the French team had the advantage and knew that all they needed to do from there was to keep the British team close by and match them tack for tack and hold the right lines for gold to be theirs.

Mills looked to pull in the experience that earned her a silver at London 2012 and gold at Rio 2016 to claw back into the gold medal position and constantly looked for openings.

As the race played out the French did keep the British at bay but Mills and McIntyre saw a small opening at the final rounding mark to the reaching finishing but the French did just enough to hold on and claim a hard earned gold.

"There were a lot of moments during the race where we didn't know what would happen, especially the last mark before the finish," commented Lecointre. "We were very close and we had to fight for the inside of that last mark to round in front of them. It was hard but we succeeded.

"It was a very intense race with the British girls. It was real match racing at the start and we got the advantage but nothing was confirmed until the end.

"We knew that we would have to match race them so we did a lot of preparation beforehand and throughout the whole race we kept a close eye on them."

Mills and McIntyre fought valiantly and finished just seconds behind the French team to take away silver.

Silvia Mas Depares and Patricia Cantero Reina (ESP) completed the podium after a fifth in the Medal Race.

Mat Belcher and Will Ryan (AUS) held a 20-point lead ahead of the Men's 470 Medal Race and were all but assured of gold. Only a disqualification would have seen them drop out of top spot and that was dependent on Jordi Xammar and Nicolás Rodriguez (ESP) winning the Medal Race.

The Australians stayed out of trouble and came through in third to confirm gold. The Spaniards had a good buffer over the chasing pack and took a sixth to seal silver.

Meanwhile, a race for bronze was on. Three points separated Hippolyte Machetti and Sidoine Dantes (FRA) and Anton Dahlberg and Fredrik Bergström (SWE) going into the Medal Race. The teams locked horns at the start, match racing each other in a bid to claim the medal.

The Swedes needed to put two places in between themselves and the French pair. The teams jostled for position and as the Swedes overtook the French towards the latter part of the race, it looked as if they had a shot at clinching bronze. However, in the light breeze they were unable to find enough speed to make up a place as the French took bronze.

Across six days of racing, Marseille provided sailors with a little bit of everything. Strong, survival sailing conditions were mixed with light and shifty conditions enabling the complete sailors to take the Hempel World Cup Series titles for 2019.

The competitors will enjoy a short period of rest before the READY STEADY TOKYO - Sailing, Olympic test event this August before the next Hempel World Cup Series kicks off in Enoshima, Japan just days after.

Find out how to follow the Hempel World Cup Series Final below:

Results will be available here -

Daily highlights and live streamed Medal Races on Saturday and Sunday will be available across the World Sailing Network.