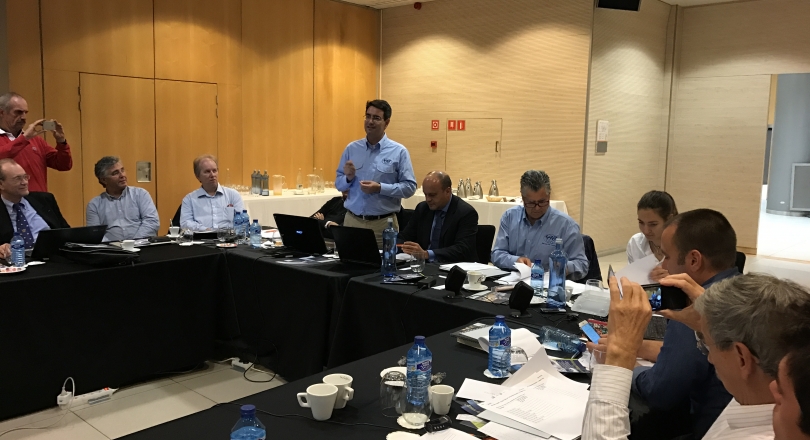 The 470 Annual General Meeting took place on Sunday 13 November in Barcelona, Spain, with representatives from thirty-two 470 National Class Associations voting either directly or by proxy.

This news belongs to
2016 General Assembly Meeting
ALL EVENT INFORMATION

Items on the Agenda included reports on activities over the past year, finance and accounts, future development and sports plans, changes to the class rules, decisions on future venues and the election of the President and Management Committee from November 2016-November 2020. A brief overview of decisions taken, includes:

Class Rule Changes – Eight submissions proposing changes to the class rules were considered, as below, which required a two-thirds majority to be approved.

There was much discussion regarding the changes to the class rules to permit a two-piece carbon mast for the 2020 Olympic Sailing Competition. Whilst the change received a majority approval, it did not achieve the two-thirds majority required to implement a change to the class rules. The plan is that further testing will take place in 2016 and early 2017, and a questions and answers document will be distributed to address queries from NCAs and sailors, with a further proposal anticipated for 2017.

The changes to the Class Rules wil now be submitted to World Sailing for final approval and implementation. See links below to review class rule change documents.

The venue for the 2018 470 Masters' Cup will be decided by the 470 Masters’ Committee in consultation with the 470 Management Committee.

Tokyo 2020 – noted the confirmation from World Sailing that the ten events for the Tokyo 2020 Olympic Sailing Competition will be the same as for Rio 2016. In addition, World Sailing will now consider the possibility of requesting an 11th Olympic medal and the type of event. Click here for full report.

Finance – the accounts for year ending 2014 and 2015 were approved, along with the 2017 budget including an increased financial commitment to development programmes.

Deep thanks were expressed to Stanislav Kassarov (BUL), the retiring President who has led and worked tirelessly for the International 470 Class Association from 2008 to 2016.