The then IYRU decided to address the low numbers of women in Olympic sailing by adding an eighth event, a 470 event for women.

Americans Allison Jolly and Lisa Jewel were the first winners in the 21-boat fleet, which was sailed in predominantly strong winds. This marked the beginning of the IYRU's determination to reach the IOC guidelines requiring a greater proportion of women’s participation in the Games.

All this took place in Pusan, South Korea’s second city after the capital Seoul, where the main Games were, and the country’s major port. Until the country was awarded the Games in 1981, recreational sailing really hadn’t taken root in South Korea and the Korea Yachting Association existed in name only.

Pusan posed interesting questions about tide in an area for which there was little data and teams had not started the large scale met. programmes that are now considered essential.

France had won one medal since 1932 – Serge Maury’s Finn gold in 1972 - until Thierry Peponnet burst onto the scene and having won the bronze in the 470 class in Los Angeles, together with crew Luc Pilot, Peponnet got the gold in Pusan. 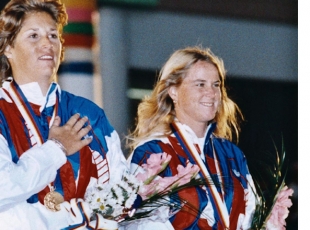