A spectacular final day at the 2012 470 World Championships in Barcelona wrapped up seven days of intense and closely fought racing. The final count was 154 teams from 42 nations competing, with the best of the best slinging it out until today’s final day. 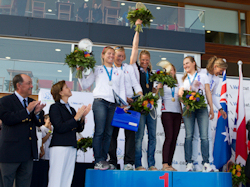 Up first on bravo race course were the 470 Women Gold silver fleet, where the final two Olympic Qualification places decided, followed by the 470 Women Medal Race and then the 470 Men Medal Race. The 470 Men Gold, Silver and Bronze and 470 Women Silver fleets raced on course area alpha. Conditions were light, with a strong current and big swell.

470 Men
Mat Belcher/Malcolm Page (AUS) secure their third World Championship yesterday, and now make it three World titles in a row – a phenomenal achievement. Their win was absolute, with a scoreline of 8 wins from 13 races. For Page, the 2012 470 World Championship gold medal marks his sixth World title since 2004.

Finishing 11 points behind the Australians, and securing their best ever result at a World Championship, were France’s team of Pierre Leboucher/Vincent Garos. Whilst virtually guaranteed of the medal going into today, they were still cautious as Garos explained, “We needed to be attentive not to be over the line. Then we tried to play with the wind and current. We have tried for this type of result for 5 years and we are very happy.”

Rounding out the medals were Croatia’s Sime Fantela/Igor Marenic in the men, who not only sail consistently but also deliver medals consistently, having stepped up to the podium at every 470 Worlds since 2009 – with one gold and three bronze medals to their names.

470 Women
In the 470 Women event, Hannah Mills/Saskia Clark (GBR) make it a first for British sailing by winning the 470 World Championship title. They went into the Medal Race on equal points with the Dutch team of Lisa Westerhof/Lobke Berkhout (NED), and anything could have happened. Mills commented, “It was pretty light winds, massive waves and quite a bit of tide, so it was a pretty stressful race really. Everyone was pretty close round the windward mark and we were right in the mix. It has been an amazing year actually. We came here and knew we had it within us to win, but the Olympics is still ultimately our goal and this is just an amazing feeling. We need to celebrate that, but not forget about the final goal.”

The French 470 Men silver medal success was matched by teammates Camille Lecointre/Mathilde Geron in the 470 Women.

Claiming the bronze medal were Lisa Westerhof/Lobke Berkhout (NED), after finishing on equal points with the French, but losing out on tiebreak.

Not quite the race Jo Aleh/Polly Powrie (NZL) had in mind. They had every colour of medal in their sight, and were kicking themselves after a 7th place finish scuppered their plan and placed them 7 points off the bronze medal.

Olympic hopes were pinned on the teams from Austria, Croatia and Russia. As the lowest on the leaderboard, the Russians had the biggest gain to make up, whilst the Austrians and Croatians had no simpler calculation to make than stay ahead of the Russians to guarantee their tickets to the Olympic Games. Croatia finished ahead of the three, with Austria going through as the final nation to secure qualification.7

The skills of young star Lara Vadlau and crew Eva-Maria Schimak shone here in Barcelona, and they dealt their cards perfectly to finish 25th overall. Only last year, Vadlau won the 420 girls’ event at the 2011 ISAF Youth Sailing World Championships, and the year before that it was gold again at the inaugural Youth Olympic Games. At 18 years old, Vadlau was the youngest helm competing at the 470 Worlds - watch this space.

Vadlau said, “This is more than amazing. I can’t believe it. We wanted to get a qualification in Perth but we were too weak and now we get it. Today, our plan was to sail like normal, but then the Croatians and Russians were so close we decided to stay by their side and play with them, and the Croatians did the same.”

Of the five 470 Women places awarded at the 2012 470 Worlds, Croatia and Poland’s teams make history by qualifying their nations for the first time ever in the 470 Women event.

A delighted 470 Class President commented, “It has been a real privilege to witness World Championship successes and the final 470 teams secure Olympic qualification. The shoreside venue has been fantastic, and the racing area outstanding. Barcelona, and the Barcelona International Sailing Centre, is a true Olympic sailing venue.”

The 2012 470 World Championship came to a finale tonight with Medal Presentations which also included the teams’ coaches joining them on the stage, in fitting recognition of their teamwork.