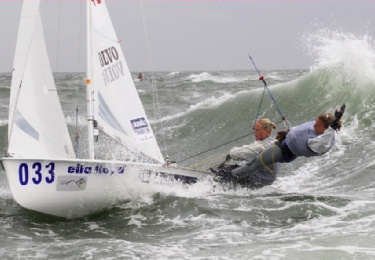 For the first day so far at the 2010 Delta Lloyd 470 World Championships, the wind conditions allowed racing to get away on time for the three groups in the Men’s fleet and the two in the Women’s. Welcome respite from yesterday’s light winds and powerful tides, today the wind was typically above 10 knots, gusting up to 18 on the men’s course, the tide still pushing the doublehanders over the start line early.

470 Men
Showing that this World Championship is set to be a high scoring affair, in the men’s fleet France’s Pierre LeBoucher and Vincent Garos are the only team not to have posted a result outside of the top ten. After their perfect scoreline in three races yesterday, Australians Matt Belcher and Malcolm page still hold the top spot, discarding a 15th place in today’s second race. After posting a 7-2 today past double World Champions, Skandia Team GBR’s Nic Asher and Elliot Willis hold second on equal points with ISAF ranked world no1 duo from Sweden, Anton Dahlberg and Sebastian Östling.

“It was not a bad day,” commented Nic Asher. “We could have gone better in the first race, but it was a tricky day - very shifty and gusty off the shore. Massively different from yesterday and downwind it was hard staying in the gusts. It was all quite close which made it quite interesting.”

Racing closer to the shore and at a different part of the day, in more wind, the tide was very much less of an issue today. Asher and Willis’ scoreline was doubly impressive today since prior to the start of the first race they had broken their kicker.
Second overall yesterday, but down to fourth today, France’s Beijing bronze medallist Nicolas Charbonnier felt today’s conditions were more difficult than yesterday. “I think tomorrow is windy again. So we will try and do our best, but the championship is just at the beginning, we have many, many races to complete, so we will see what will happen over the next days.”

Today it was the shifts that caught out several of the top sailors and promoted others. Thus ISAF world ranked 23 Australians, Sam Kivell and William Ryan, and 27th ranked Germans, Jan-Jasper Wagner and Lennart Scheulfer, were among the winners in today’s first race, while batting very much above average are the Portugese duo Alvaro Marinho and Miguel Nunes, ranked 82nd, but who are lying seventh overall, having won their group in today’s second race.

470 Women
In the Women’s class, there is still some consistency among the top three, where New Zealanders Jo Aleh and Olivia Powrie have pulled into the lead, four points ahead of the hotly tipped Italians Giulia Conti and Giovanna Micol, in turn another four in front of yesterday’s leaders, Americans Erin Maxwell and Isabelle Kingsolving Farrar.

“It was pretty good today - it took a while to remember how to sail in over 7 knots!” commented Aleh, trying not to look too surprised at their position in the regatta. “It was nice to have some breeze. On the reach there was bit more puff - it was much better than yesterday. In the second race we did a few silly things, but we got away with it.” 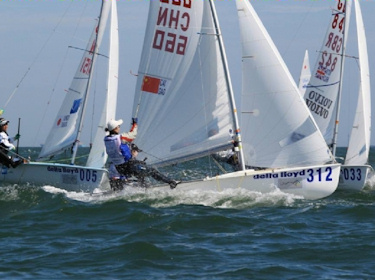 ISAF World no1 Ingrid Petitjean and crew Nadége Douroux have had a tougher time and lie currently in an uncharacteristic 20th overall, although this will improve when a discard comes into play after five races. “We had a very bad race and some average scores. We are not doing very well overall. We’ll catch up later. It has been very small decisions either too late or not good ones and it makes a big difference in a short time.”

At around 1400 local time after the second race, the boats were sent ashore. “There was a warning for a big storm with a lot of wind and thunder. The warning was given that it would be at 1500,” explained Event Director Edwin Lodder. After several boats were caught out and some damage caused when a similar prolonged squall came through on Monday afternoon bringing with it 30+ knot winds, Lodder opted for prudence.

Sitting ashore mid-afternoon in blazing sunshine several sailors queried this decision as in the event the qualification series could have been completed before the torrential rain did indeed begin at around 1700 local, but without Monday’s giant gusts. “We have two kinds of weather radar - Dutch and European,” explained Lodder. “One says it will pass in an hour, the other says it will be slower.” Sadly the latter proved true.

“They are being a bit cautious now: Fair enough with 180 boats, it could go pretty bad,” commented Jo Aleh.

Tomorrow the Men’s groups will have to sail one more qualification race and the women two before they are sent back in to be divided into Gold, Silver and Bronze (for the men) fleets.

Credit: James Boyd/Sailing Inteliigence
Image: (top) Sarah Ayton and Saskia Clark (GBR) ahead of the chop! © Thom Touw . (right) The unranked (all teams without a ranking have a bow number of 300+) women's Chinese team of Liping CAI / Yang GAO Yang have achieved an overall position of 24 after four races © Thom Touw