The Race Committee held the fleets ashore waiting for the wind to stabilize, but the sailors were still faced with very unsettled conditions on the first day of the final series. 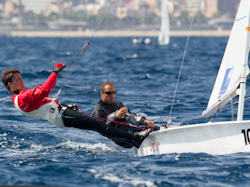 The Race Committee held the fleets ashore waiting for the wind to stabilize, but the sailors were still faced with very unsettled conditions on the first day of the final series. Described as “washing machine” conditions, the day definitely didn’t suit everybody.

Two races were completed for all fleets, except the 470 Men bronze fleet, who completed only race 7. The breeze was around 9 knots from 170 degrees across the two races courses, very shifty and with a confused sea.

The day after the night before had given time for the reality of Olympic qualification to hit home. Benjamin Grez, who secured Chile’s place on the Olympic startline said, “I don’t feel it yet, it is still so recent. We certainly don’t feel that we are going to the Olympics yet and can’t quite believe it. It is a great moment. We are really happy and didn’t expect we would have such a good day as yesterday, as we were far away from the cut and we made a great day. This is really important for us. Until now there was just a Laser from Chile going to the Olympics and it would have been the third time he goes alone.”

For Grez’s crew, Diego Gonzalez, their Olympic qualification has an even more special significance, as the last time Chile qualifed and competed in the 470 back in the 1984 Olympics, his father Alberto Gonzalez helmed the team to 18th overall. According to Grez, the senior Olympian’s advice for the 2012 470 Worlds was to “sail quiet and the easiest way they could.”

470 Women
Same three women’s teams at the top of the leaderboard, just a shuffle round in positions. Despite posting their worse results so far – a 12,6 - up into first overall go Ingrid Petitjean/Nadedge Douroux (FRA).Their day was just more consistent than others, including their team mates Camille Lecointre/Mathilde Geron, who were knocked down from first overall to third. Up into second overall go Jo Aleh/Polly Powrie.

The seasoned Olympic campaigner Fernando Sesto of Argentina will compete at her fourth Olympics this summer, and her quality of performance so far in Barcelona reflects those years of experience, with up until today a scoreline of top ten finishes.

Speaking on the team’s ability and motivation to keep sailing at such a high level, Sesto said, “It is not easy to keep on training and focus on the events. Today was the most difficult day of the Championship so far. It was not stable, shifty and very wavy. It was very difficult and we lost many places and then we go up many places. It was not easy sailing. We made a top 10 and a top 20, so we are still in there. We are happy with our scoreline of all top 10 until the last race. We made so many mistakes in the last race today, but it was so difficult I think many of the fleet made mistakes.” Sesto and crew Consuelo Monsegur ended the day in 11th overall.

Defending World Champions Tara Pacheco/Berta Betanzos (ESP) were victims of the conditions today, only managing a 26, 12 and drop down the leaderboard from 9th to 12th. Now carrying their discard result of 26 from today’s race 7, they are really going to need to punch in some top placed results over the next four races of the final series, to guarantee their place in the top ten Medal Race.

The battle for Olympic qualification is shaping up and is a long, long way from being determined, as Austria, China, Croatia, Denmark, Poland and Russia fight for one of the final five nation places on offer at the 2012 470 World Championships.

Denmark’s Henriette Koch/Lene Sommer have consolidated their position even further as the highest unqualified nation on the leaderboard, moving up into 7th overall after a win in race 8. Sommer said, “It was so tricky today, so it is still just about keeping cool, keeping your head down and working hard. We have five races left. There were big waves today and not much wind, shifty and with pressure coming, so it was really difficult today. I am really happy that we found the rhythm and did well in the last race.”

For the other teams fighting for selection, there is a total shuffle in positions, with China now the next best placed unqualified nation behind Denmark, followed by Poland, Croatia, Austria and Russia.

Unlikely that Mat Belcher/ Malcolm Page (AUS) are too concerned by this, as there 2,5 scoreline from races 7 and 8 still gives them an impressive 20 point margin over second placed Gideon Kliger/Eran Sela of Israel. Rounding out the top three are Pierre Leboucher/Vincent Garos (FRA).

Moving up to second overall today, from 6th yesterday, Kliger/Sela are pleased with their performance. Sela said, “We are pretty happy, except the black flag in the second race of qualification. We have sailed good in all the other races. Today was tough and it was a game of which team took the decision first, because if you tack too late you will just be after everyone. Everybody today just had to sail on what they felt."

The team are hoping that their fourth place finishes at each of last year’s pinnacle 470 Championships, the Worlds and Europeans, will be upgraded to a podium finish in Barcelona. Selan explained, “We were a bit unlucky last year, but even those Championships we felt we sailed good and were happy. After last year, we searched for what we could improve and everything is coming together now, which is good.”

With the final seven nation qualification places awarded yesterday (subject to ISAF ratification) to Canada, Chile, Ireland, Korea, Russia, Turkey and South Africa, most of the teams can now just focus on racing the World Championships.

ttle is getting really close, just 5 points between them, as they strive to be the team selected to represent Greece. Whichever team finishes ahead at the Worlds will go to the Olympics. Kampouridis/Papadopoulos had the better performance today, with a 12,4 and reduce the points advantage held by Mantis/Kagialis.

Kagialis commented, “Well done to the other team as they had a good race and did really well. It was a little confused with the weather, but it is only day. There is a lot of pressure, but you know the best will go do the Olympics. We will continue, there are another five races.”

Both Greek teams have every likelihood of making it through to Saturday’s top 10 medal race, so this head to head has a long way to go yet before either of their 2012 Olympic aspirations are sealed.