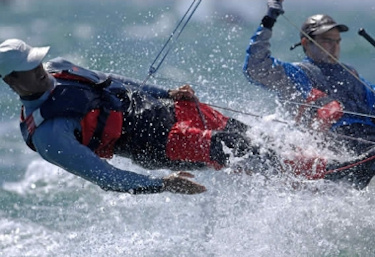 The first day of the 470 Warm Up Cup” was warm and sunny with northerly medium winds which enabled 4 races to be completed. Being held immediately prior to the 470 European Championships in Istanbul, Turkey, the 470 Warm-Up Cup led by world class coach Andreas Kosmatoploulos (GRE) aims to provide some race training on the racing area of the Championship.

Open to all sailors, the 470 Warm Up Cup has attracted the top and well-known sailors alongside some newer faces to the 470 fleet.

In the men’s division, the experienced Israeli team Gideon Kliger and Eran Sela lead the fleet while in the woman’s division the Estonians, Marjaliisa and Elise made a great opening in the event.

A debrief is held for the sailors at the end of each day’s racing. Tomorrow, Thursday 26 August, 4 races are scheduled and more boats are expected to take part increasing the total number of participants.

Special thanks to Yalcin Gurkan, Tuba Uca and Baran Edige who have supported the Warm-Up Cup.

Racing at the 2010 470 Open European Championships starts on Tuesday 31 August through to 6 September.