Victory to France and Japan in Weymouth 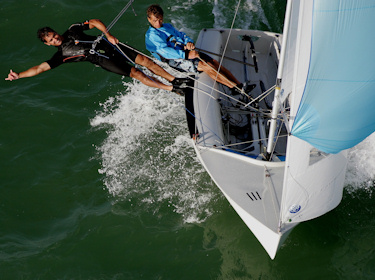 Men's Two Person Dinghy - 470
The action was coming thick and fast on the two main harbour courses, where the Medal Races were alternating to supply a constant, almost dizzying sequence of action for the gathered crowds - both virtual and real. In the Men's 470, Pierre Leboucher and Vincent Garos have spent the week swopping the top spot with the newly crowned World and ISAF Sailing World Cup champions, Australians Mathew Belcher and Malcolm Page. In the end it was France that took the gold, pushing Belcher and Page into silver. The bronze was taken by the British team of Luke Patience and Stuart Bithell.

The regatta win for Leboucher and Garos boosted them up the standings from fourth to take second overall behind Belcher and Page. Swedens Anton Dahlberg and Sebastian Östling finished third after not making the Medal Race in Weymouth.

Women's Two Person Dinghy - 470
The Women's 470 fleet has been ultra competitive, with several leaders during the week, but it was the Japanese pair of Ai Kondo and Wakako Tabata that had control going into the Medal Race. But they had to hold off a challenge from the Spanish team of Tara Pacheco and Berta Betanzos, who crossed the finish line right behind the Dutch World Champions, Lisa Westerhof and Lobke Berkhout. But Kondo and Tabata were third, more than enough to record a comfortable win overall and take gold, with Spain in silver and the American team of Erin Maxwell and Isabelle Kinsolving dropping from second overall going in, to take bronze.

The tracking, radio and live tv was great. You can replay all - and thumbs up to the RYA and the Skandia Sail for Gold team for delivering some great coverage.