US 470 Coach - Romain Bonnaud is calling the layline for the USTAG Men’s and Women’s teams training for the Perth 2011 ISAF Sailing World Championship. 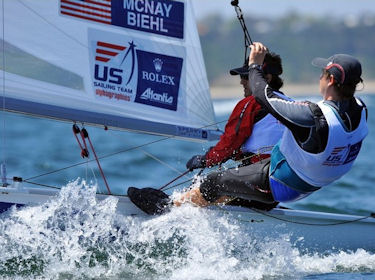 Romain moved from the South of Brittany, France to Miami, Florida just a few months ago to become a full-time coach for US Sailing Team AlphaGraphics. The decision to move from France to the US was not a quick, nor easy decision. Romain and his wife not only had to consider a major international move, they had to also consider that their first baby is due mid-January 2012. His wife has been very supportive of the many overseas trips Romain makes and he adds, ‘I’m on the road up to 200 days a year.’

Traveling to Australia is a special sacrifice, because this trip to the opposite side of the globe is over four weeks long and Romain arrives back in Miami only weeks before his new baby is due.

Top sailors make top coaches. Romain started with his brother Benjamin as a 470 athlete. Their team was consistently in the top ten finishes in European and World regattas. The peak of their campaign came in June 2006 in Balatonfüred-Hungary. Skipper Ben Bonnaud and crew Romain Bonnaud took the first place overall finish at the Open Nissan Cup 470 European Championship.

Benjamin and Romain finished their competitive sailing in 2008. Benjamin has also moved into coaching – as the French Men’s Match Racing coach. Romain has been an Olympic Coach for the 470 class since 2009.

A year ago, in November 2011 Romain was on the same waters at the Perth International Regatta. Stuart McNay and Graham Biehl finished seventh overall in a field of 25 male teams and edged ahead of the Australian’s World Champions Matthew Belcher and Malcolm Page at that event and they won the first round of the ISAF World Sailing Cup a few weeks ago at Sail Melbourne.

Romain has been busy over this last year making sure that his 470 athletes stay in the top ten. As Romain and his teams prepare for the 2011 Perth ISAF World Championships, he concludes, ‘I am very focused on the 470s at this moment. My goal is to get medals for the games in London.’

Romain sees real benefit in training both male and female teams together. He comments, "We are working all the time together; so we are sharing all of the information." The experience and the personality of the individual athletes plays into Romain’s communication.

He’s unconcerned about the physical differences between male and female teams. He observes, "The 470 is a good boat for both," and adds, "It is not too overpowered for women. You can change a lot of tuning in the boat depending on the size of the crew and skipper." Coach Romain was quite happy with how all the US teams performed in the heavy air at the 2011 Zhik Australian 470 Championships last week. The coaches and teams know that there will be strong wind at the upcoming 2011 Perth ISAF World Championships in December. All felt the Australian Nationals event was great preparation for the Worlds.

US Coach Romain Bonnaud has a lot of activity and excitement to look forward to over the next several months.

He’s had a fast windward run from European champion to international coach and is now about to round the top mark at the Perth 2011 ISAF Sailing World Championships from 3 December through 18 December. He’ll have a downwind run including a new member of his family on the way to the medal finishes for his teams at London 2012.

Keep an eye on the top USSTAG 470 sailors Stuart McNay and Graham Biehl and Erin Maxell and Isabelle Kinsolving Farrar. And, watch for Adam Roberts and Nick Martin and Amanda Clark and Sarah Lihan to be climbing the ladder and putting the pressure on the top of the fleet.