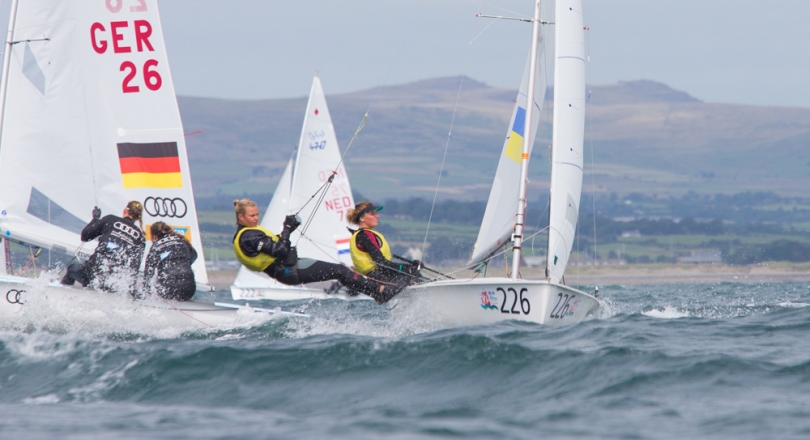 Two more races for all fleets today and the girls steal a march on the 420 Junior European Championships leaderboard, claiming 4 out of the top 5 places in this open fleet.

Not much fun for the boys who are being well and truly outsailed, with Poland’s Ewa Romaniuk/Katarzyna Goralska continuing to hold the lead.

Anna Kyselova/Anastasiya Krasko better their three successive race wins at the Junior Worlds, by adding two more victories to today’s scoreline, to make it four in a row. Italy’s Matteo Capurro/Matteo Puppo increase their points lead at the front of the 470 Men fleet.

470 Junior Europeans
Neck and neck with just 2 points between each of the top three 470 Men’s teams, and the 2nd and 3rd places on the leaderboard changing hands today. Consolidation at the top spot though for Italy’s Matteo Capurro/Matteo Puppo, who secured their first race win of the series from a masterful race execution of race 5 with a start to finish lead over the rest of the fleet, following up with a 5th place in race 6.

“It was a very good race the first one,” said Puppo, “and our start was good as there was a black flag and all the fleet stayed a little down on the starting line. So we used it to our advantage and started ahead of the others and came out very well from the start. Now we are really calm for this Championship, compared to the pressure of the Junior Worlds,” he added. 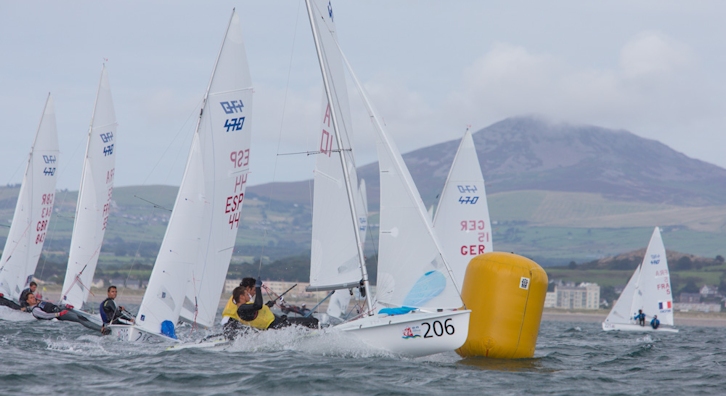 Gal Cohen/Dan Froyliche (ISR) swap places with Mike Wood/Hugh Brayshaw (GBR), moving up to second on the leaderboard with the British in third.

Spain’s Jordi Xammar/Joan Herp seem to be following a similar trend to their Junior Worlds pathway, working their way up the leaderboard after a slower start.

“Today was good. We didn’t realize when we came here but we were a bit nervous and today we sailed as we did at the Junior World Championships. We had good starts and it was the same as at La Rochelle, when we suddenly started sailing well and better. I am happy because today we made a step in our sailing knowledge and it was like a turning point,” said Xammar. “We made some mistakes on the first days which shouldn’t have to be made. The boat is fast and if we sail like today we can be at the front of the fleet.”

Responding as to whether they feel more eyes are watching them due to their Junior World Championship success, Herp was unequivocal in his response. “No. It is a Championship that we are very happy to have won, and it is a great start to our campaign, but it is our first year. No, no we just want to keep improving. This next year we will train harder than the last year, and we will be as if we hadn’t won anything.”

At the halfway stage in the 470 Women Junior European Championship, Anna Kyselova/Anastasiya Krasko are the team to beat as today they surpassed their three successive race wins from the 470 Junior Worlds in La Rochelle, by securing two more victories to make it four in a row. 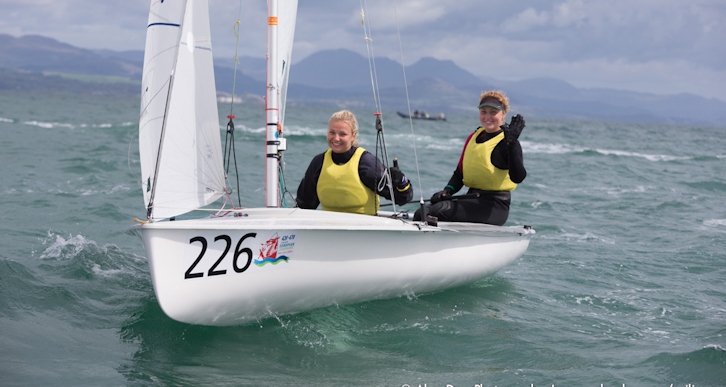 Their grins were fairly broad as they came ashore. “We are just really happy, and in most races we were leading from start to finish,” said Kyselova. “We are really happy with the way we are going here.”

The team have managed to maintain their high level after what has been a long summer of racing and their best year of competing so far. “We are just determined on winning this regatta,” commented Krasko. “We were second at the Junior Worlds and here we want to be first and will do everything we can do to win. We are very tired and have spent a lot of time abroad and want to win this. Our results should be high because we have worked hard.” 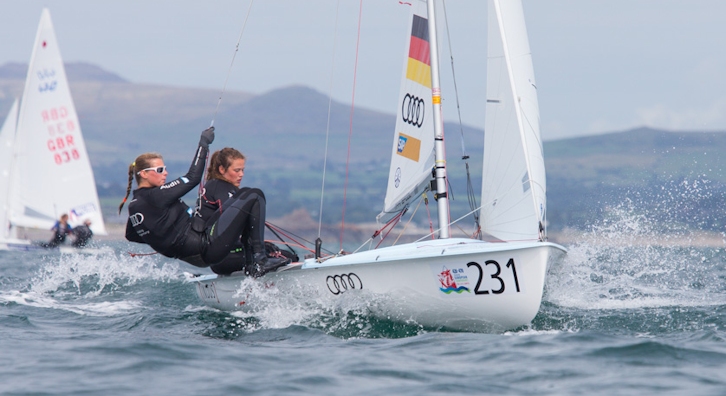 Overall no change in the top five on the leaderboard , with the team making the biggest gain today being the sister partnership of Greta and Anna Markfort from Germany, who move up to 6th overall from 4,3 race finishes.

420 Open
Races 5 and 6 wrapped up the qualification series for the 420 Junior European Championships and cut the ninety-six boat fleet in half, with 48 teams advancing to gold fleet and the remaining 48 going through to silver. The series discard kicked in after race 5, with a bit of a counting game for teams aspiring to gold fleet as they calculated the race positions they needed to deliver in race 6 to make the grade. 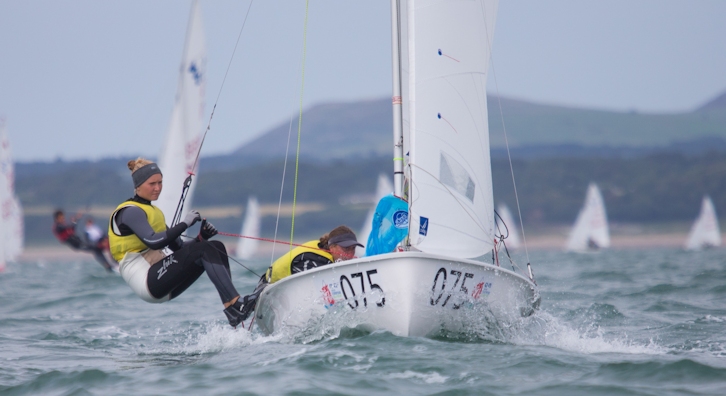 There was the potential for some big changes in the leaderboard after the discard, but it did not unsettle the series leaders Ewa Romaniuk/Katarzyna of Poland. Despite a poor performance by their racing standards so far - two double-digit results - they continue to hold tight at the front of the fleet.

“I am really happy and we are sailing well. We are a little bit surprised that we are leading,” said Romaniuk. “For me this is our best regatta.”

Moving on up to join them in the top three today are Italy’s Ilaria Paternoster/Benedetta di Salle, who recently won the bronze medal at the SailFirst ISAF Youth Worlds and secured two race wins, along with France’s Marie Soler/Laura Pebrier.
The girls’ advance up the leaderboard has knocked Portugal’s Diogo Pereira/Pedro Cruz, ISAF Youth Worlds 420 boys bronze medallists, down to fourth. 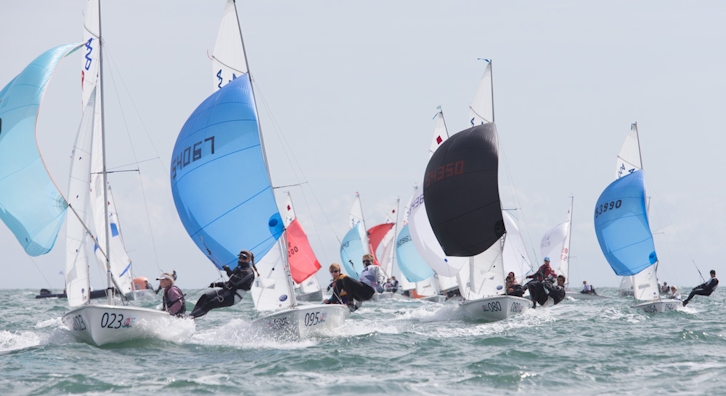 Tomorrow’s first day of finals is likely to be a showdown as the Portuguese will come face to face with the Polish leaders for the first time.

“We haven’t sailed against the Polish girls yet and now the fleets are divided into gold and silver we will just try to do our best to race against them. I didn’t know this team before and they are really good,” smiled Pereira. The pair seemed to struggle in the conditions today as Pereira explained, “The wind was clearer before, but today it was really shifty and it was a bit difficult. But overall the wind here is very good.”

Joining the top three girls’ teams are Silvia Mas/Nuria Miro from Spain and the 420 Ladies World Champions Annabel Cattermole/Bryony Bennet-Lloyd of Great Britain in 5th and 9th respectively. Look a bit further down the leaderboard and nine of the top twenty teams are girls.

Cattermole/Bennet-Lloyd have had to bring themselves back down from the heady heights of their gold medal high to focus back on the race track.

“It has been tricky getting back into our routines,” explained Cattermole. “Yesterday was a really tough day, we were rounding the windward mark in around 35th after poor starts. So yes we were moving forwards really well in the races, but we shouldn’t have been back there. We were not really punching out from the starts and giving ourselves the options. We are not as sharp here as Valencia, I don’t know why. We are holding back and not being as confident I guess. It is going to be hard to catch the Polish girls though.”

Six more races over the next three days will make up the final series of races to ultimately crown the Junior European Champions, with races 7 and 8 scheduled to get underway at 1300 hours on Tuesday 20 August.