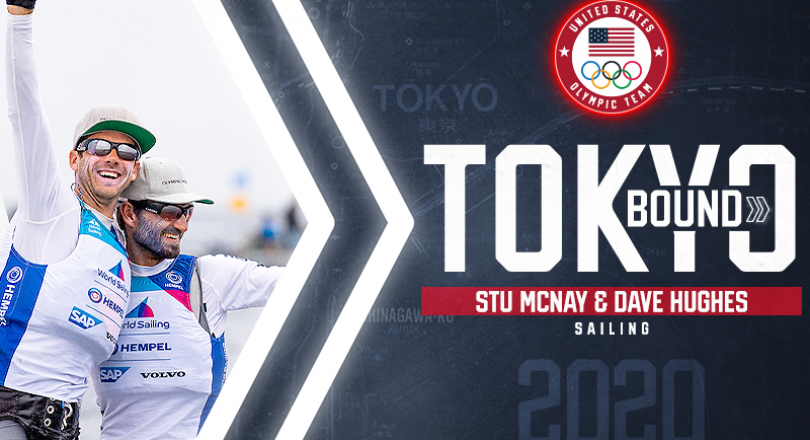 Olympic veterans Stu McNay and Dave Hughes added their names to the 2021 U.S. Olympic Sailing Team on Tuesday, following the publication of US Sailing’s revised selection procedures for their men’s 470 class. These revised procedures officially conclude the Men’s 470 Trials based on the results of the first two selection events.

The Olympic Games Tokyo 2021 will mark the fourth for McNay and the second for Hughes. They partnered to finish fourth at the 2016 Olympic Games, marking the second best finish among U.S. sailors in Rio.

McNay, 38, made his Olympic debut at the Beijing Games in 2008, when he and partner Graham Biehl edged Hughes and partner Michael Anderson-Mitterling for the U.S. spot. A native of Providence, Rhode Island, McNay finished 13th in Beijing and 14th four years later in London, sailing again with Biehl.

Following the London Games, McNay partnered with Hughes, who had spent the previous quad coaching, and the two quickly made a formidable team, culminating with their near-podium finish in Rio. Hughes, 42, was born in Ithica, New York, and lives in Miami.

“After the 2012 Games, we both realized that we still had a great deal of competitive fire left in our tanks,” Hughes told TeamUSA.org prior to the Rio Games. “Our Olympic journeys were not meant to be over.”

Since the two-person dinghy became an Olympic event in 1988, the U.S. has won four medals, most recently a gold-medal performance from Paul Foerster and Kevin Burnham in 2004.

McNay and Hughes join eight U.S. athletes who had already qualified for Tokyo in six boats. They are: