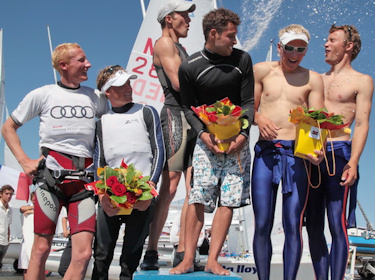 Just 10 metres decided who would win the bronze medal of the 470 Junior European Championships, and who would win leather. Leather, a kind way of saying ‘nothing’, the dreaded fourth place for which there is no room on the podium.

Moving ahead on the final lap of the Medal Race, Daniel Zepuntke and Dustin Baldewein of Germany edged out local La Rochelle team, Kevin Peponnet and Julien Lebrun, crossing two boatlengths ahead of the French. The two teams finished equal on overall points but that superior Medal Race finish earned bronze for the Germans.

It was a great ending to a week that had started disastrously for Zepuntke and Baldewein who were disqualified for infringing another boat in a port/starboard incident during the first qualifying race of the series. The DSQ was all the harder to swallow because it was a race that they had won. “We have been under pressure ever since then,” said Zepuntke, “so it is great to have won bronze today. We are very happy.”

With the wind refusing to come out to play in La Rochelle until mid-afternoon, the Gold and Silver Fleets were unable to complete the final race of their championship. However they could at least come in to watch the top 10 in the Medal Race do battle on the internet, thanks to the GPS tracking systems fitted to each of the boats.

For those watching, both online and on the water, it was hard to imagine that Sofian Bouvet and Jérémie Mion would be able to win the Medal Race after a mediocre first upwind leg. They were languishing in the back half of the pack in the early stages, although they waited patiently for their moment to pounce. “We were quite far back in the Medal Race,” said Mion, “but it was three laps, so we knew we had time to climb. Actually we didn’t want to be first around the mark, because, sometimes when you are behind in the Medal Race it can be better because you can gybe first and attack the boats in front.”

So it proved, with Bouvet and Mion’s silky-smooth crew work in the Force 2 conditions playing to their strengths. All the passing traffic of sailing yachts, powerboats and jet skis chopped up the water, and called for calm heads from the 470 sailors. By the end of the first lap Bouvet and Mion had moved up to 2nd behind fellow French sailors, Sacha Pelisson and Nicolas Rossi, and from then it was like watching a cat toying with its prey. Inevitably the reigning World and Junior European Champions moved into the lead on the second run and 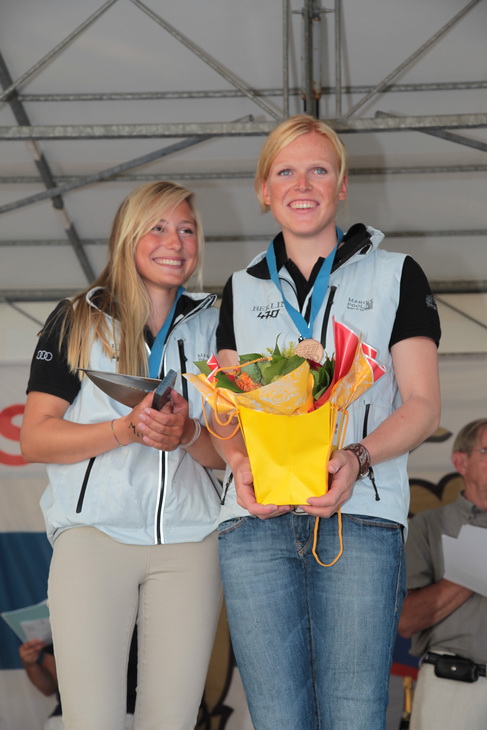 consolidated to win the Medal Race, their 11th victory from 12 races this week.

“We hoped to win this regatta,” said Mion, “but we never thought we could win like this. It is unbelievable.”

Tim Elsner, who with Oliver Szymanski, won the silver medal, paid tribute to the champions. “Their performance was incredible. They deserve their victory, and one day I think we can expect to see them competing in the Olympic Games.” Based on what we’ve seen this week, it would be hard to argue with that.

As for Elsner and Szymanski, today marked a fitting end to their 470 career before they bulk up for the Olympic Star keelboat. “When we crossed the finish line it was a huge relief. We celebrated and suddenly all the tension of the past week exploded. We could have come fourth with no medal today, and there were nervous times in that Medal Race, but we held on and in the end we have won the silver. Big celebrations tonight.”

With no further racing for the rest of the 86 boats in the 470 fleet, Annika Bochmann and Anika Lorenz have won back the girls’ 470 Junior European title they won in 2008. Former Volvo ISAF Youth World Champion Frances Peters with crew Eilidh McIntyre won silver for Great Britain, with last year’s Junior European champions Victoria Jurczok and Josephine Bach of Germany taking bronze.

While France won the championship overall, Germany claimed the most medals, four out of six from the men and women’s fleets, with strong showings also from Greece and Italy. Davide Vignone and Matteo Ramian, clinched the Silver Fleet by a single point from Spaniards, David Gestoso and Isaac Arce, with the top girls in this division being Rosita Bakker and Jeske Kisters of the Netherlands.

After the prizegiving at the Société des Régates Rochelaises, many of the teams will stay in La Rochelle to celebrate this evening, while others set out immediately on the long road to Istanbul to compete in the 470 European Championships, which begin just over a week from now.

The 2010 470 Junior European Championships took place in La Rochelle from 12-20 August 2010. Next year’s event is to be held in Nieuwpoort, Belgium.

Relive the Live Tracking from the Medal Race