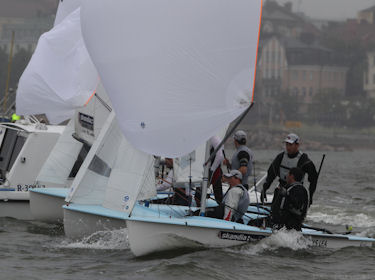 Sunset+Vine TV News will be providing daily news coverage of the Perth 2011 ISAF Sailng World Championships with a programme of news feeds, unilateral content and bespoke content for the world’s broadcasters with an interest in sailors in the Medal Zone in this the last major buildup to London 2012.

Sunset+Vinehave released their news output schedule which will be available by satellite and FTP, which includes:

Television coverage of the World Championships to more than 60 countries will be coordinated by the appointed Host Broadcaster, British production house Sunset + Vine APP. Live Medal Race coverage, daily highlights and international news coverage will all be available in High Definition

“The broadcast will take the event and its sporting stars worldwide, from the first step of the opening ceremony to the last medal presentation, via an exciting programme of sailing in one of the world’s best sailing locations,” said Andrew Preece, of Sunset + Vine APP.

Live coverage in Australia will be produced by the Sydney media company 5 Oceans Media for the Ten Network and its high definition channel, One.

The Perth 2011 broadcasts will include the latest developments in animated tracking and graphics to show the positions of boats on the water. The French company BeTomorrow has been contracted by Sunset + Vine APP to provide the 3-D graphics that will complement the live television coverage.

Perth 2011 Event Director John Longley said that BeTomorrow would also be contracted to provide the animated 3-D images of daily racing to be shown on a big screen located at the Worlds Village in Fremantle’s Esplanade Park.

“The combination of live pictures and the virtual reality of 3-D animation brings the excitement of close, fast sailing to a new level”, Longley said. “Spectators in Fremantle will have the best of both worlds – the ability to watch the medal races close to shore in Bathers Bay or to follow the racing on more distant courses on the large screen, complete with explanatory graphics and commentary.”

The local company Azure Helicopters will carry the cameras providing aerial coverage of the racing off Fremantle and also offering other helicopter services associated with the World Championships.

"The Azure Helicopters team brings to the event our wealth of experience, professionalism and first class service that fits perfectly with an international event of this type," Azure Operations Manager Peter Morrison said. "Whether you decide to view live racing from the comfort of an air-conditioned VIP helicopter or escape to the wonderful Margaret River region, you will enjoy an unforgettable experience."

There will be daily news from the Opening Ceremony and then every day of sailing; daily 26-minute highlights programming on every day of racing and live multi-camera coverage of all of the ten Medal Races.