Turkish Delight for Greeks and French in Tense 470 Finale 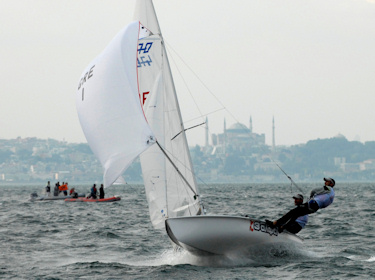 With the great mosques of Istanbul providing the most dramatic of backdrops, the outcome of the 2010 Open 470 European Championships remained in the balance until the final leg of the men’s Medal Race.

Just five points separated the top six men’s 470 teams going into the Medal Race, and it was going to take an outstanding performance to secure gold. The Greeks were greeted with their favourite conditions - strong and gusty winds - and Panagiotis Mantis and Pavlos Kagialis took up the early running just ahead of Israel, represented by Gideon Kliger and Eran Sela.

Israel seized the advantage a short way into the three-lap windward/leeward course, although with the wind shifting wildly from side to side, no lead was every secure. On the final leg the Greeks pounced on a couple of small tactical errors by Israel and Mantis and Kagialis powered across the finish line just seconds ahead of Kliger and Sela.

Mantis explained his strategy after losing the early lead: “I focused on staying close, we got the lucky gust, and we moved to the front again.” Kliger, twice the runner-up in past European Championships, said he was “happy and disappointed” to have won a third silver in his long 470 career. “Gold was in my hands, so I’m a little bit disappointed, but I missed the layline at the last windward mark and gybed too late compared with the Greeks, we didn’t stay enough between him and the finish.”

Still, Kliger was happy to have come away with silver after a challenging week. “This is the hardest medal I ever won, you were never in control at any point in any race.” Istanbul marks the conclusion of a successful season sailing with his new crew Eran Sela. While for Kliger this was a bitter-sweet moment, for the younger and less experienced Sela it was unbridled joy. “My first senior medal in the 470, so I am very happy.”

The British team - Luke Patience and Stuart Bithell - had gone out with the gold spot on their mainsail, signifying them as the series leaders. They elected to start on port tack behind the fleet to be first into the middle of the race course, as Patience explained: “Before the start we’d been watching the wind, and it was always coming down the middle of the course, never at the edges. But then - sod’s law - the breeze died in the middle and we got wrapped round on either size, and before we knew it we were 9th or 10th, scraping the bottom of the barrel.”

From sitting in gold medal position suddenly Patience and Bithell were facing the prospect of coming away with nothing. “But we kept our heads cool and just chipped away,” said Patience, whose climb to 5th place gave them the bronze medal. “We would like to have won but we’re still happy to come away with a medal.”

The women’s leaderboard may not have been as tight as the men’s, although there was still plenty of drama and uncertainty on the race course, with capsizes and boats hitting marks keeping the finishing order uncertain until the last. While the Danes had fallen out of medal contention after an unsteady outing the previous day, Henriette Koch and Lene Sommer gave themselves the consolation of winning the Medal Race. They nearly threw it away on an unforced error, hitting the final windward mark, but managed to take their 360 penalty turn in a strong gust and still stay ahead of the British boat sailed by Sophie Weguelin and Sophie Ainsworth.

Series leaders Emmanuelle Rol and Helene Defrance also struck a windward mark and took a penalty, but apart from that sailed a controlled race ahead of their chief medal rivals. In the end the French won gold by 18 points, a dominant performance for such a tricky week’s sailing. “The conditions were a little bit tough,” said Rol, “but we enjoy racing in these conditions. I don’t know if we understood the wind but we enjoyed it. Istanbul has been great. After Holland and Great Britain it’s nice to sail in a sunny place!”

Camille Lecointre and Mathilde Geron had been lying in silver medal position at the beginning of the day, but a poor first beat left them way back in last, and they only managed to overtake the Israeli team who retired after a prolonged capsize. This relegated the French team to 4th overall, with last year’s European Champions Giulia Conti and Giovanna Micol taking silver and another French duo, Ingrid Petitjean and Nadege Douroux taking bronze.

Conti, who had looked so furious the previous day after letting any serious prospect of gold slip away, was all smiles again today having at least salvaged a silver from Istanbul. “Finally some success again, after a couple of days of blackout,” she said. “It has been a really tough race course, very tricky, but the French seemed to sail perfectly. They deserved this win, they made fewer mistakes than the others, and they have won this event by far. For us the silver medal is a very good result after a very good season. We have finished in the top three in almost every event, and now we go home for the winter to work out what we need to improve on for next year.”

Earlier in the day the remainder of the 92 competing teams who had not qualified for the Medal Races, completed one final fleet race. Reigning Junior World and European Champions Sofian Bouvet and Jeremie Mion of France secured victory in the men’s Silver fleet.

This evening the prizegiving took place at Istanbul Sailing Club, before the sailors embarked on the long drive back to whichever corner of Europe they have come from. As for the new men’s 470 European Champion, Panagiotis Mantis predicted a night that would involve too much alcohol and not enough sleep. “And maybe when we get back to Greece we will break some plates!”

The 2010 Open 470 European Championships were organised by The Istanbul Sailing Club in co-operation with the International 470 Class Association and the Turkish Sailing Federation.