Tricky Day at the Miami Races 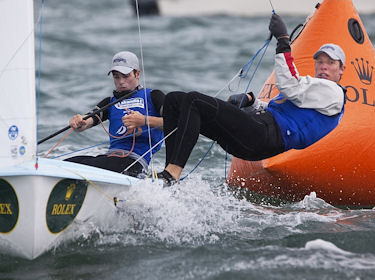 Things started out slowly this morning, on day 3 of US SAILING’s Rolex Miami OCR when all but one class was postponed ashore due to light wind that followed morning showers, but the fleets were back in action on Biscayne Bay by afternoon, with sunshine and fresh breezes to improve their day.

The top three boats in the 470 Men Fleet are really put in stunning performances to sit a clear twelve points ahead of the rest of the fleet. Consistency is key and they are the only teams to have achieved top ten finishes in the five races held so far. 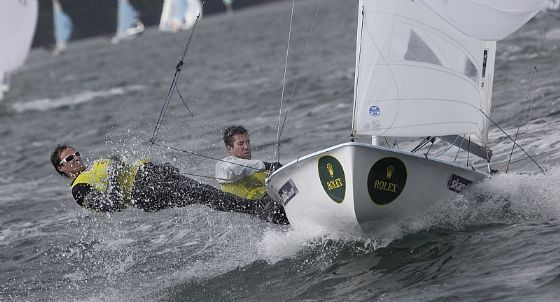 After two days of maintaining a lead in the 41-boat Men’s 470 class, Nic Asher and Elliot Willis (GBR) were edged out on day 3 by fellow teammates Luke Patience and Stuart Bithell for the top spot on the scoreboard. Patience/Bithell won the day’s single race, whilst Asher/Willis crossed the line in sixth and have been able to use it as a discard race and now sit three points behind the new leaders.

“It was a tricky day,” said Asher, who with Willis has won the Men’s 470 Worlds twice. "The wind was off the land so it was shifty and gusty, lots of places changed, but our sixth was solid. Tomorrow it’s all to play for.”

Patience said his team’s victory today came after a disappointing start. “We didn’t pop out in front until about two-thirds up the second windward leg; that’s pretty late in the race, but as it developed, the lanes opened up. There was not much pattern to the wind, which went from 10 knots up to 15 knots, so it was an active kind of sailing-- a lot of dividing our time between looking around and driving.”

Two new teams have jostled their way into the top ten at this stage in the event, with Israel's Gideon Kliger and Eran Sela posting a fourth in race 5,their best performance of the regatta, to shift up into tenth overall. And sitting just ahead of them in the leaderboard at ninth overall are Spain's Onan Barreiros and Aaron Sarmiento who finished second today and with it moved up to #9 from #11. Out of the top ten went the Argentinians Lucas Calabrese and Juan de la Fuente and the Coster brothers from Holland. 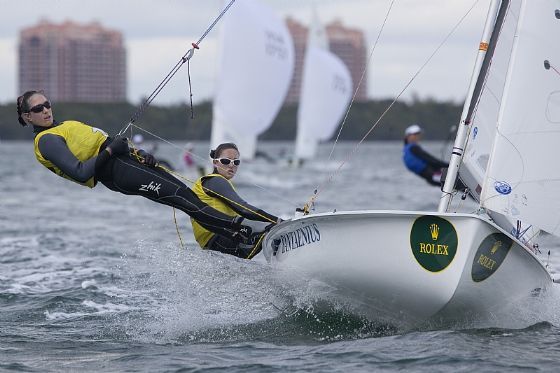 Leaders from day one in the 24-boat Women’s 470 class, Ingrid Petijean and Nadege Douroux (FRA), had a “disappointing” race—a 12th—but still hang on for a one-point lead over Penny Clark (GBR), who won today’s race to move to second
“Before the start, you could see the dark clouds approaching,” said US Sailing Team AlphaGraphics 470 coach Mark Ivey, "and the teams were scrambling to adjust their rig settings for high wind, but as the race went on, the squall line passed, more toward the Star course (farther out), and it lightened into a leftover westerly breeze.”

What is interesting is that with the exception of second placed Penny Clark and Katrina Hughes (GBR) all the other teams in the top 10 are already discarding a double-digit score – so if any of that bunch achieve another mid-fleet result they are going to have to count it and consequently slip down the leaderboard. Clark and Hughes have still got to focus at the front, but they don't quite have that pressure on them. They are assuredly reeling in the French pair of Petitjean and Douroux to sit just one point behind the series leaders 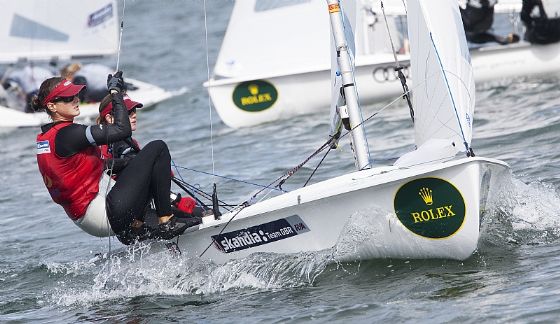 and the British could be on their way to their best ever result as a team.

Second overall going into today's race, Camille Lecointre and Mathilde Geron (FRA) were over the line at the start to give them a disappointing letter score of 25 points – which for the moment is discarded but still knocks them down to third overall in the leaderboard.

Young guns on the US Sailing Development Team, Anne Haeger and Briana Provancha (USA) continue to give the more experienced American teams a run for their money to lead the contingent of USA boats in twelth overall.

2008 Olympic Gold medal winning crew Isabel Swan, with Martine Grael finished an unlucky 13 to
slip down the leaderboard to number 8 – and are going to be fighting to hold onto a top 10 position in the leaderboard and qualify to the Medal Race.

The 470s are in for a long day on Thursday, as it is anticipated they will sail three races to catch up with their two-races-a-day schedule before the final medal races (for top-ten in each of the ten Olympic classes) conclude the regatta on Sunday.