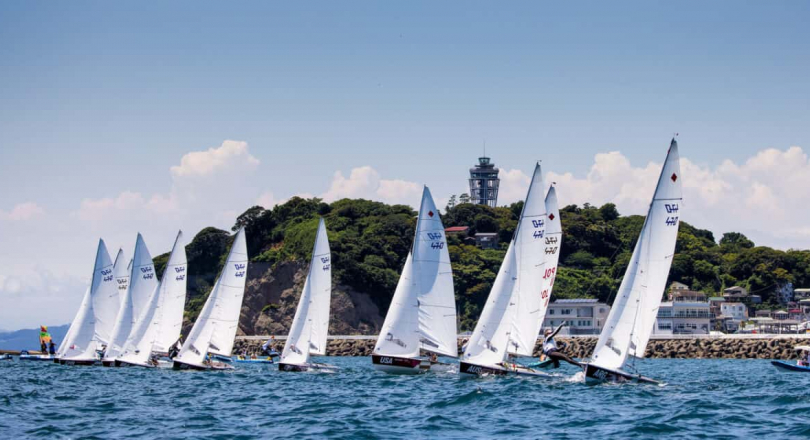 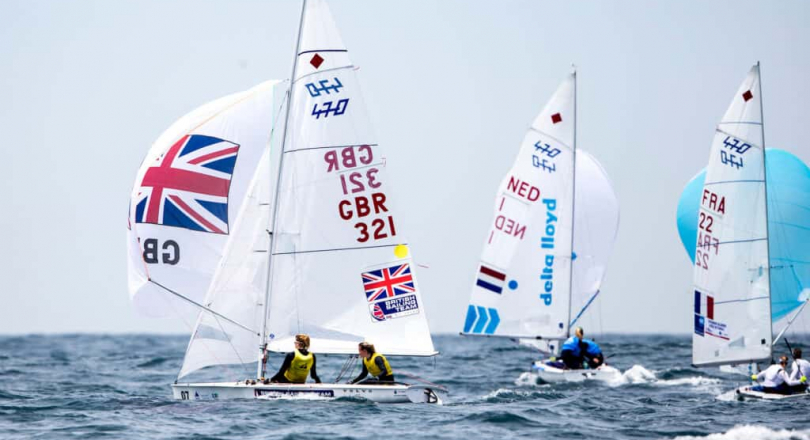 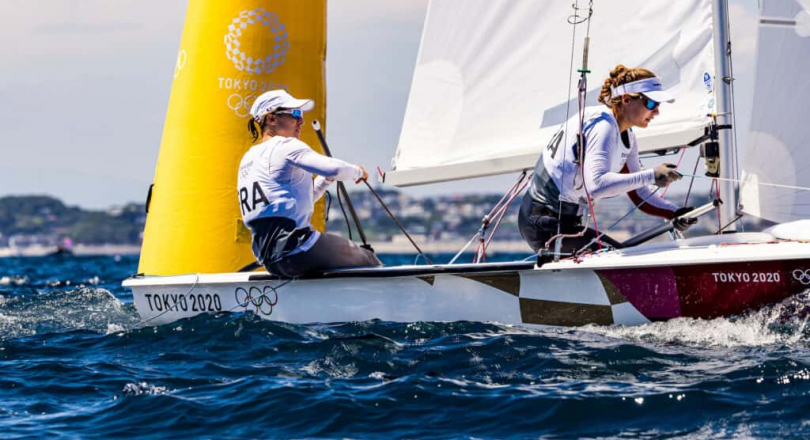 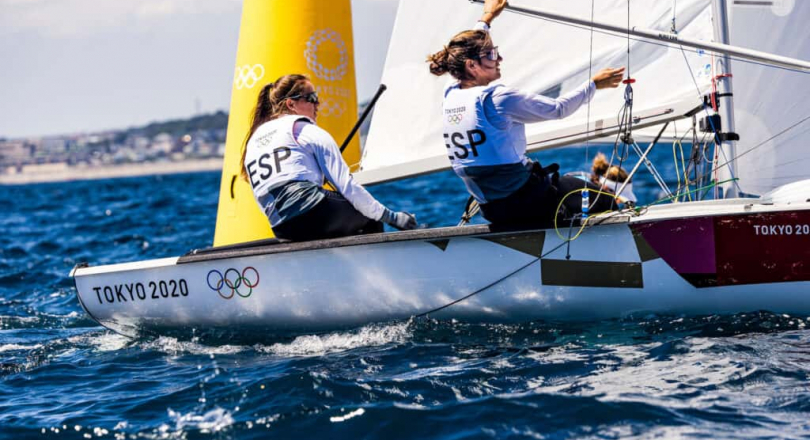 While it was always possible for women to compete in Olympic Events in the ‘open era’, the reality was that very few did.

So for the Seoul 1988 Olympic Games in Korea, the first ever women’s sailing event was created, and the 470 was the equipment chosen for the job. The women use exactly the same equipment as the men in their 470 division, although Tokyo 2020 will be the last time that men and women compete in separate events.

For Paris 2024, the 470 becomes a compulsory mixed class like the Nacra 17 Multihull, with men and women forming teams together. So for many of the crews about to compete in Tokyo, this will be their last regatta racing together.

The gold and bronze medal winning helms from Rio 2016 have teamed up with new crews for the Tokyo cycle, and the fight for the top of the podium in the Women’s 470 looks set to be a duel between Hannah Mills and Eilidh McIntyre (GBR) and Camille Lecointre and Aloise Retornaz (FRA). However, the Olympic Sailing Competition is never quite so clear cut and the recently crowned World Champions, Silvia Mas and Patricia Cantero (ESP), look well placed to maintain a strong Spanish tradition of Olympic success in the 470. 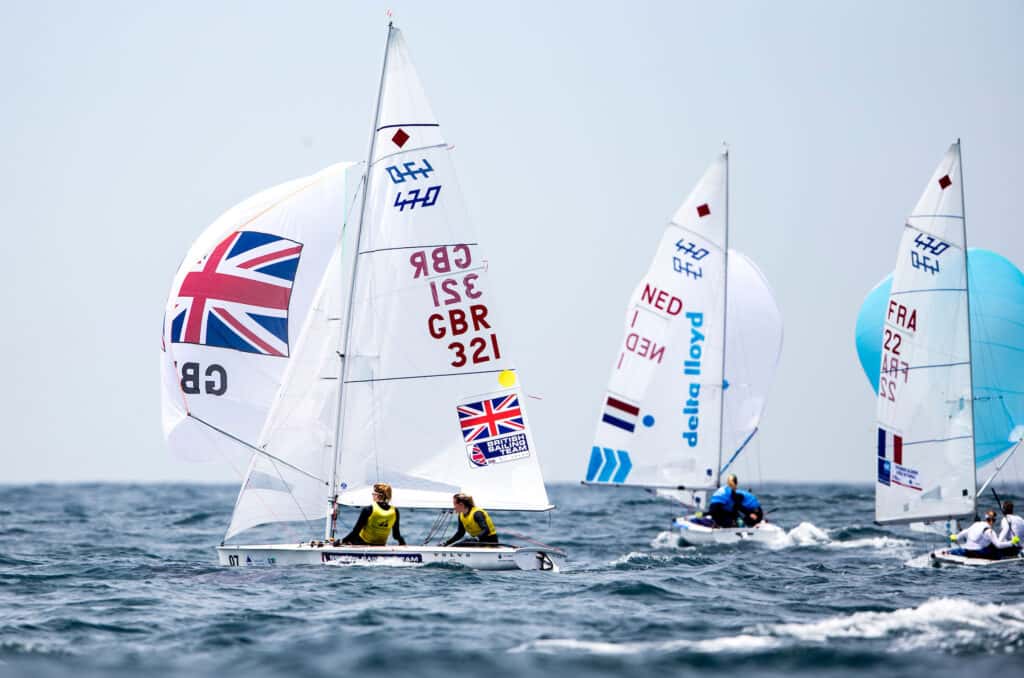 In regattas at the start of the year, reigning Olympic Champion Mills, recently named as Team GB flag bearer, and her crew McIntyre started badly and had a lot to do to get themselves back into contention in the latter stages. While a fifth at the Worlds and second at the Europeans is below the British team’s very high expectations, that ‘bouncebackability’ could prove crucial at the Games. It’s also important that the British team won the 2019 World Championship which took place in Enoshima.

Mills competes at her third Games (silver at London 2012, gold at Rio 2016) while Tokyo is McIntyre’s Olympic debut. Mills can’t speak highly enough of her crew, “She is amazing, she has so much energy, so much motivation and passion for the Olympics.

“She definitely reminds me of me in the London cycle, where everything is about the Games. You live, breathe, eat, sleep, everything it. It’s so cool to see and it definitely motivates me and that brings us together. She is also just a great teammate, so fun to be around, and she brings a lot out on the water, always trying to problem-solve and figure out how we could be better.”

Eilidh’s father Mike McIntyre won Olympic gold in the Star Keelboat back in 1988. It has been an inspiration to the younger McIntyre for as long as she can remember. “One of the really beautiful things about having an Olympic gold medal hanging in the house is that anything seems possible,” says Eilidh. “My dad did it, so why couldn’t I?”

Local fans will be all eyes on 2018 World Champions Ai Kondo and Miho Yoshioka to win a medal on home waters although it’s been a long time since the Japanese crew has had an opportunity to compete against their rivals. Will they have enough boat speed and extra knowledge of the local conditions to overcome their lack of regatta time? With a 5th place at Rio 2016, it’s easy to see why local fans are expecting a big performance from the home team. A place on the podium is more than just a dream for Kondo and Yoshioka.

Since winning a bronze medal at Rio 2016 with previous crew Helène de France, Lecointre has become a mother whilst continuing to be one of the most consistent performers on the international circuit. Lecointre, now sailing with Games first-timer Retornaz, rarely finishes out of the top three in major competitions. The French pair won the Olympic Test Event in 2019 and more recently the European Championship in Portugal earlier this year. Mas and Cantero come to Tokyo as reigning World Champions, the Spanish having scored 6,2,5,1 in the past four World Championships. Mas and Cantero were thrown together through force of circumstances but the partnership clicked almost straight away, recalls Mas, “I had started to sail with another girl who in the end couldn’t combine her studies with sailing, so I was alone, right in the middle of the season. I only knew Patricia from seeing her around.
“To be a crew member you have to be tall and of a certain weight; Patricia met both requirements and had been involved in a Rio campaign – that’s why I called her. We trained for two days, competed in Palma as a try-out and, without really knowing each other, we finished third. We understood each other very well. She’s a top woman who makes everything much easier. She transmits a lot of positive energy.” The Dutch team of Afrodite Zegers and Lobke Berkhout is looking dangerous, having finished runners-up at this year’s World Championship. Zegers convinced Berkhout out of retirement to see if the 40-year-old can add a gold medal to the silver she won at Beijing 2008 and the bronze at London 2012, not to mention five world titles in the class. That’s the kind of experience that could really help in the pressured environment of Tokyo. Zegers finished fourth at the last Games crewed by Anneloes van Veen, and has the belief that she can reach the podium alongside the massively accomplished Berkhout.

Others to watch include the Italians, Elena Berta and Bianca Caruso, who have made a quantum leap in performance over the past two years. From finishing 16th at the 2017 and 2018 Worlds, they jumped to fourth place in 2019 and then third earlier this year at the Worlds in Portugal.

Agnieszka Skrzypulec and Jolanta Ogar of Poland will be in the mix, winners of the 2017 World Championship and never far from the front of the field.

Brazil’s Fernando Oliveira first competed at Sydney 2000 as a teenager. Along the way she won a bronze medal at Beijing 2008 and now, aged 40, competes at her sixth Olympic Games along with her crew Ana Luiza Barbachan.

The 21-boat Women’s 470 fleet will be the last fleet to set sail with their first race at 1445 on Wednesday 28 July on the Sagami racing area. Ten fleet races will then follow, two per day with two reserve days, ahead of their Medal Race on Wednesday 4 August.