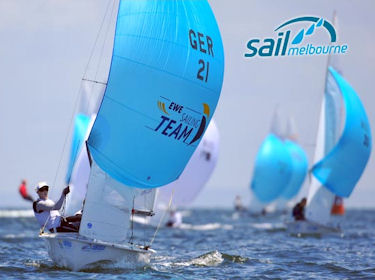 The opening round of the ISAF Sailing World Cup, Sail Melbourne, has come to an end with close finishes and a number of upsets on the final day of racing. The 470 crews were made to work for their medals. After a postponement, the first race was called off during the second lap, with World Champions Mat Belcher and Mal Page leading by a considerable margin.

Belcher and Page went into the race in third place overall, but only two points off first. Among the top three whoever finished in front would win.

However, you never write off true champions. Working back up to the fleet, they used superior speed downwind to hit the front and were never headed. Sam Kivell and Will Ryan (AUS) managed third in the medal race, which put them into third overall.

A relieved Malcolm Page described the tactical dilemma that faced the Australians. “We would have liked to stay a bit further left, but two of our main rivals went right and one went left so we played the percentages. We managed to close the gauge, got on the back of the top five. Then we hooked some good waves and got to the front.”

The women's 470 was also wide open going into the medal race, with five crews having a chance to win. With no Australian crews in with a chance, a German crew was the local favourite as it featured Mat Belch 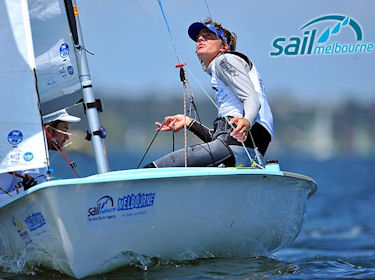 Belcher and her skipper Katherin Kadelbach needed to finish ahead of the Austrians, Sylvia Vogl and Carolina Flatscher, and hold off challenges from compatriots Wagner and Steinherr and two Chinese crews.

Ultimately, Feng Hui Min Huang and Li Zhu Huang (CHN) won the race from Kadelbach and Belcher, with the Austrians third. This meant the German pair won the title on a countback, the closest result of the regatta.

Sail Melbourne was a difficult regatta from a wind perspective, but the challenging conditions created an exciting final day. The Sandringham clubhouse was packed and visitors could view the races live on the course or follow them on the tracker.

The live blog was well supported, with nearly 4000 participants from all round the world.

The ISAF Sailing World Cup now moves to Miami at the end of January.