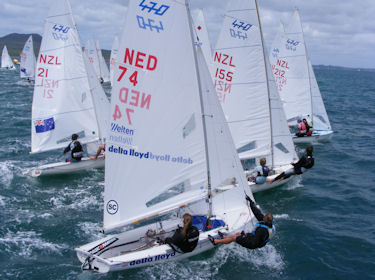 Racing is underway at the 2012 470 Junior World Championship, hosted at Takapuna Boating Club in Auckland, New Zealand. Two races were sailed on Saturday’s first day of racing, with the men/mixed and women’s teams sailing as one fleet, but scored separately. Things are very tight at the top, especially in the men/mixed fleet, with only 2 points separating the top 5 teams on the leaderboard.

Flat water allowed the fleet to fly around the course in a very shifty and patchy south westerly offshore breeze. The breeze peaked at around 18 knots, but generally sailors raced in 12-16 knots after leaving the shore in very light winds.

Commented 2011 470 Junior Women's World Champion helm Annika Bochmann (GER), who is seeking to defend her title with crew Elisabeth Panuschka, "Conditions are very shifty and gusty and it will be a challenge for us to handle these conditions, it's like a lake."

470 Men/Mixed
In the men/mixed fleet, Australian brothers Matthew and Robert Crawford sailed the most consistently to come out on top with a slim margin of one point, which also separates second placed local sailors James Turner/Finn Drummond from Simon Sivitz/Jas Farneti of Italy, who got the gun in race two.

Race two was abandoned due to a drifting mark, and after a restart, Magnus Masilge/Moritz Klingenberger of Germany won the race and are fourth, on count back from Dirk Bennen/Roger Weijers of the Netherlands.

An international fleet of 33 boats from 13 nations are racing and if Auckland's Waitemata Harbour keeps serving up fickle offshore conditions, consistency will be what is needed to remain at the top of the leader board.