The Perfect 470 Night - World Sailor of the Year Awards 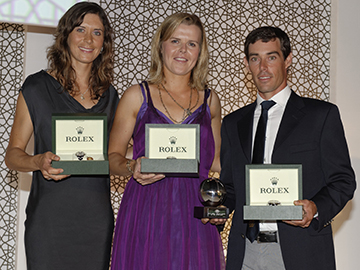 The ultimate celebration for the ulimate year of 470 sailing as ISAF and Rolex announced the winners of the 2013 ISAF Rolex World Sailor of the Year Awards as Mathew Belcher (AUS) and  Jo Aleh & Polly Powrie (NZL) on Tuesday 12 November. The Awards presentation took place right next to the beach in Muscat, Oman under a stunning starlit evening.

Mathew Belcher from Queensland, Australia, has been awarded the coveted title of ISAF Rolex World Sailor of the Year. Also nominated in 2010 and 2012, Belcher's achievement is testament to his excellence and remarkable consistency.

"It means a lot. To come away and to get the ISAF Rolex World Sailor of the Year award is phenomenal. It's great recognition for this year and the efforts we've put in and results we've achieved,” said Belcher, who has gained an unprecedented level of success racing in the 470 Class – a 4.7 metre (15.4 ft) dinghy sailed the world over. Belcher is the first male 470 skipper to win the award. 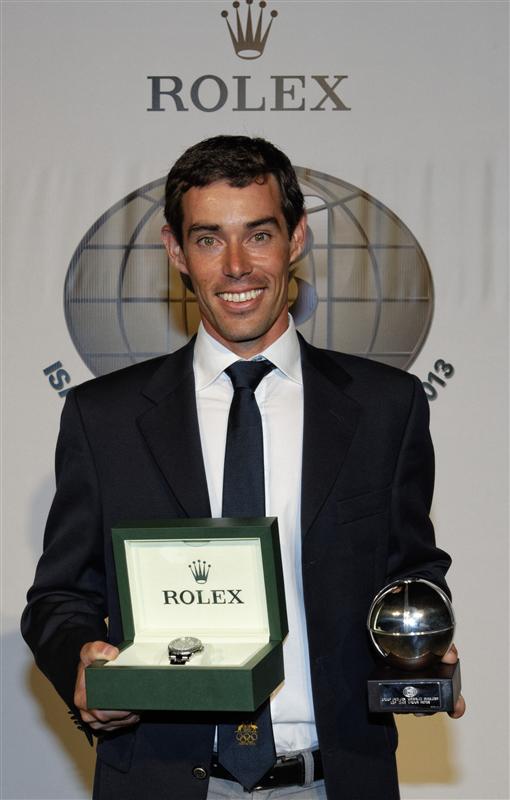 The pinnacle of recognition from the sport, the award crowns a remarkable period for the 31-year old. In August this year, Belcher claimed an unmatched fourth consecutive 470 world championship title with victory on the waters off La Rochelle, France. World championship success completed a hugely successful 2012-13 season which included a European title (in Formia, Italy) and three ISAF Sailing World Cup victories. Clear evidence that Belcher had not chosen to rest on his laurels following last year's career highlight - Olympic gold in London. His winning run as a 470 skipper now stretches to a remarkable 17 consecutive regatta victories.

Success follows years of hard, patient work. Belcher, who began sailing at the age of 7 and has been part of the Australian sailing team since 1999, competed in the Class for almost a decade before winning his first world championship title in 2010 alongside longtime former crewmate Malcolm Page. The win in The Hague, Netherlands was the catalyst for his remarkable rise - bar one brief moment Belcher has led the 470 world rankings since August 2010.

The retirement of Page after the 2012 Games signalled a period of reflection for Belcher. "After London 2012 making the decision to campaign again for Rio 2016 took some time,” he admitted. "Malcolm and I spent more time together than we did with our wives! Everyday you're communicating a common goal and sharing that experience. It's hard when that stops. It was a bit of a shock but then it was a challenge to campaign for Rio.” Once the decision to continue was made, the Gold Coast native teamed up with a new crew in Will Ryan. As results testify, the adjustment has been impressively smooth, confirmed by their world championship win this summer. "Will is an amazing sailor and I knew he was ready to replace Mal (Page) in the boat. Will and I did quite a bit of sailing together before London so it made the transition a bit easier.”

Seventeen consecutive regatta victories – stretching from November 2011 – is an outstanding and rare achievement in such a fiercely contested, unpredictable sport. "The winning run has been amazing, something that I'm personally really proud of,” reflected the affable Belcher, who is married to German Olympic sailor Friederike Belcher. "To be able to do it with two different crews has been really rewarding and it shows the depth we have in the Australian 470 system and in our preparations and planning to constantly perform.”

Each victory has brought increased responsibility, greater expectation. "Most people don't realise how much pressure this generates. As the regattas build up, the pressure compounds,” admitted Belcher. "The fleet starts to focus more on you and you place more pressure on yourself to perform. The hardest part of this streak has been to remain stable, focused and motivated to perform every day you hit the water. These 17 events are spread over two years and a lot of credit has to go to our support team and coach for keeping us focused on the target.”

The Belcher team extends beyond two men in a 4.7m boat. World-renowned coach Victor Kovalenko, the mastermind behind the three decades of Australian sailing success, has played a crucial role in the athlete's development and in instilling this winning habit. "Over the past 14 years, Victor has been there for me to guide me in the right direction both in my sailing career and personal life. We have a great friendship and a lot of trust.”

"This award is like the black belt of the sport of sailing. It's top recognition. I have watched Mathew for many years in training, in competition, under pressure, in study, in normal life, when's he's talking to people. He is a very balanced, humble person. He deserves this success,” reflected a proud Kovalenko.

Like Belcher, Jo Aleh and Polly Powrie, affectionately known as Team Jolly, are the current Olympic and World 470 Class champions. Their success is also a product of sheer dedication and impressive teamwork. "We're a little bit shocked to be up here,” said Aleh on receiving the award. "We're really excited to be part of this and honoured to be part of group.” "We've not done this alone and had some wonderful people behind us who have been truly supportive of us throughout our sailing careers,” added Powrie.

Skipper Aleh, drawn to sailing while watching New Zealand win the 1995 America's Cup, and crew Powrie, for whom sailing is part of her family heritage, have much in common having commenced their sailing adventure at the same time, in the same boat, at the same location: in the late 1990s, sailing Optimists at the Kohimarama Yacht Club in their hometown of Auckland. 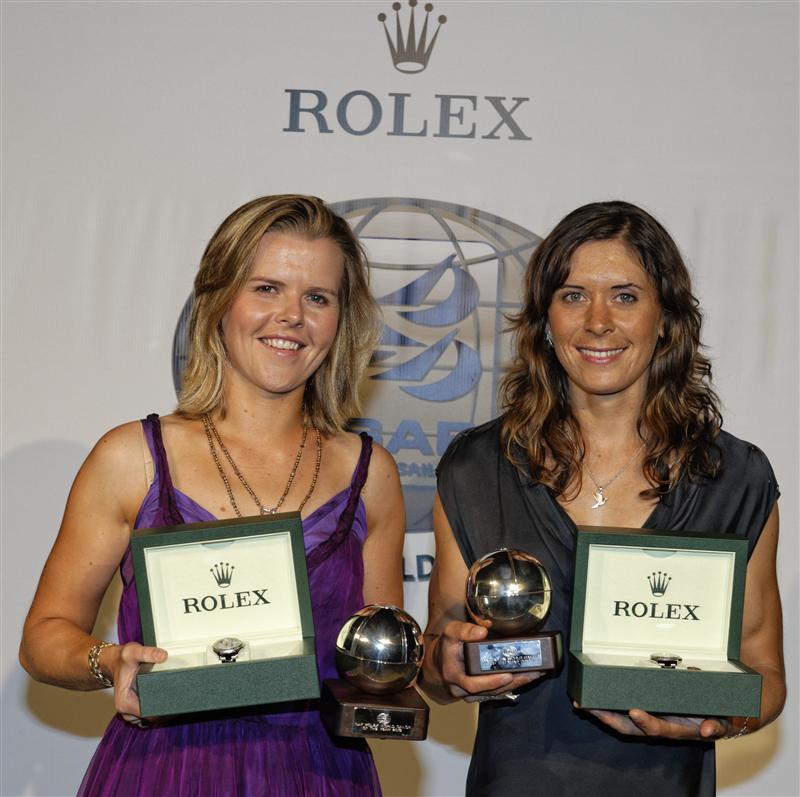 It was not until the Women's 420 World Championship in 2007 (when, fittingly, they won the title in Auckland) that they sailed together at a professional level. "We competed against each other through junior and youth competitions,” said Powrie, adding, "and then I thought if you can't beat them, join them!”

Afterwards, Aleh briefly continued to pursue a career in single-handed sailing, competing for New Zealand in Laser Radial at the Beijing Olympics, finishing in seventh place.

Their mutual transition to the 470 Class occurred shortly after Beijing, as they joined forces for London 2012. On route to their main goal – Olympic gold – they claimed two commendable podium finishes at the 470 world championships (silver in 2010, bronze 2011), before hitting top form in time for London 2012.

The Olympic Sailing Competition in Weymouth and Portland went down to the wire. Ahead of the final Medal Race, Team Jolly were level on points with British hopefuls Hannah Mills and Saskia Clark. Keeping their cool and making a more astute tactical move at the start, they won the final race by a huge margin. "We had a goal for four years and it was a great thing to be able to achieve it. Going into that day we had a job to do and we're glad we were able to do it,” explained Powrie. "The best part of that day was being lifted in the boat out of the water by our team mates!”

The duo's achievement was well received in New Zealand, ending a dinghy-sailing gold drought of 28 years (following Russell Coutts's success in Los Angeles 1984). Despite their success, self-deprecation is part of the Team Jolly persona. Their boat is affectionately dubbed 'Muppet' so called because previously 'we have made some silly calls in the past at certain regattas and because we sail like muppets occasionally.'

Following their London 2012 triumph, Team Jolly decided to mount a defence of their Olympic title in Rio in 2016. "We've got Olympic selection next year and that's a massive hurdle to get through. From there it's a similar program with World Championships and World Cups through to Rio," said Powrie. In the meantime, success has continued to follow. Three regatta victories early in 2013 set them on their way to a silver medal at the Open European Championship. In August they went one better and finally claimed that elusive 470 world championship title, again dominating the final match race. "Olympic gold has been a two part thing. It put pressure on us because we want to keep proving we can do well. At the World Championship we wanted to prove that we weren't a one hit wonder,” reflected Aleh.

Recognition in both the male and female categories caps a memorable year for the 470 Class, fittingly in the year it celebrates its 50th anniversary. 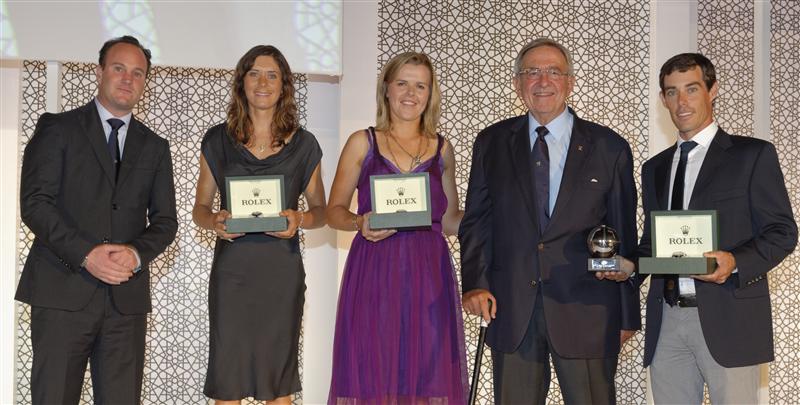 The ISAF Rolex World Sailor of the Year Awards takes place during the International Sailing Federation's (ISAF) Annual Conference, which this year was held in Muscat, Oman. The ceremony, attended by international sailing stars, key decision makers and sponsors is a true celebration of the sport.

The annual Awards, sponsored by Rolex since 2001, are the highest honour a sailor can receive and is recognition of achievement in a twelve-month period, in this case from 1 September 2012 to 31 August 2013.

Competition for the 2013 Awards was formidable, with four outstanding female and five equally exceptional male candidates short-listed from a list of nominations made by the public at large. The winners were decided by the votes of the over 130 Member National Authorities of ISAF. Suspense was maintained until the very last minute, with the nominees and guests unaware who had won until the official announcement itself.

The full list of names vying for the coveted and prestigious 2013 ISAF Rolex World Sailor of the Year Awards were:

For high-resolution images, copyright-free for editorial purposes and more information regarding the ceremony, winners and nominees please visit: www.regattanews.com 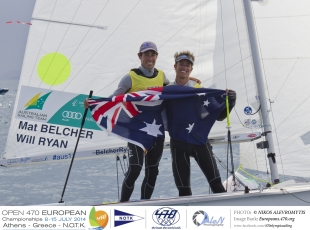