Ten Bullets confirm Bouvet/Mion as Kings of the 470 Kids 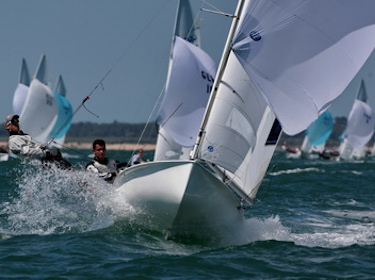 Sofian Bouvet and Jérémie Mion fired in two more bullets at the 470 Junior European Championships in La Rochelle today. Out of 11 races, the French sailors have scored 10 wins and are discarding a second place. In this high quality, 86-boat fleet made up of some of the best young sailors in the world, they have sealed championship victory with two days to spare.

Bouvet was not celebrating yet however. “We want to race tomorrow and we must race in the Medal Race on Friday,” said the reigning 470 World and European Junior Champion. “This is our last championship at junior level and also the director of sport from the FFV (French Sailing Federation) will be coming to watch us in the Medal Race.”

He admits the level of dominance in this regatta has come as a surprise even to himself. “We have a lot of respect for our competitors in this championship, so we cannot quite believe it,” he said.

The conditions in La Rochelle have been exceptional this week. Today race officer Alain Corcuff was frustrated by a 90-degree windshift forcing him to abandon the race and wait for the wind to settle before re-starting. But it was worth the wait as the wind returned, steady and strong, blowing up to 16 knots.

The team that had been sitting in second until illness put paid to their medal hopes yesterday were back on the water, and firing on almost all cylinders. Berenger Balzeau, crewed by Mathieu Fountaine, was back out of hospital and back in the saddle today, racking up a 4,2 to lift the local team from 23rd to 14th overall. “I’m feeling good today because all of my friends are here for me. They hope I’m feeling better than yesterday, and I’m very happy to be sailing again knowing that my friends and family are supporting me here in my home town.” As for making it into the top 10 for the Medal Race, Balzeau and Fountaine have to make up 16 points to get on terms with the Greeks currently in 10th, although as Balzeau said, “Anything is possible. I hope we can do it.”

While the gold is gone, there will still be a scrap for the silver and bronze. Tim Elsner and Oliver Szymanski made a strong bid for silver today with 2,4 scores. “Everything felt very good today,” said Elsner from Germany. “The boat was fast and we were working well together. It would be great to win a medal here because this is our last regatta in the 470.” And their next boat? The Olympic keelboat, the Star. Yes, you read that correctly. Elsner, 69kg, and Szymanski, 74kg, plan to pile on 50kg of weight to start campaigning the Star. So if they win a medal on Friday, they will be celebrating not just with beer, but with extra helpings of dessert.

This has been a good regatta for the Germans, with Daniel Zepuntke and Dustin Baldewein in 4th place, just two points behind French team Kevin Peponnet and Julien Lebrun. So there is all to play for in the battle for bronze, with a small chance of one of these two teams snatching silver off Elsner/Szymanski if they falter tomorrow, in what are predicted to be much lighter winds.

Germany continues to lead the girls’ fleet, although Annika Bochmann and Anika Lorenz were not sounding particularly pleased with their performance today. “We’re too distracted by the boys around us,” said Bochmann. “We think they are faster than us, but I think maybe that is just because we think too much about it.” British sailors Frances Peters and Eilidh McIntyre are in the silver medal position, but sit 20 points behind the Germans so they have their work cut out to make it to gold.

In the Silver Fleet, yesterday’s heroines from Italy, Camilla Marino and Anna-Gracia Malventi, slipped down the rankings as they struggled in the stronger breeze and choppy water. Taking their place at the head of the Silver Fleet is another Italian team, Davide Vignone and Matteo Ramian, who scored two 2nd places. This team has really started to show their potential after a fraught start to the regatta with two Black Flag disqualifications and another DSQ from their first five races. Winning the Silver Fleet would serve as some sort of consolation, although they only lead by a point from 2nd placed Spaniards, David Gestoso and Isaac Arce.

Unluckiest boat of the day was the 470 of Max Schaller and Tim Wilcke (GER), with the port side of the transom almost ripped away from the hull after a Croatian boat misjudged its avoiding bear-away manoeuvre when crossing behind the Germans upwind. That brings the Germans’ regatta to a premature end, with their 470 in need of major repair before it is fit to race again.