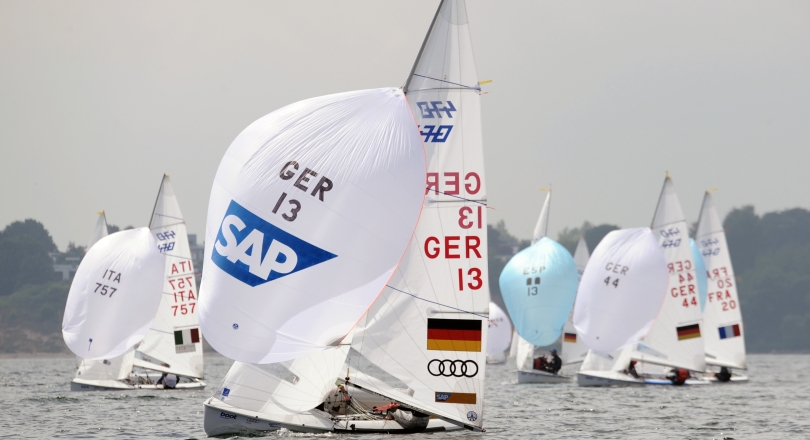 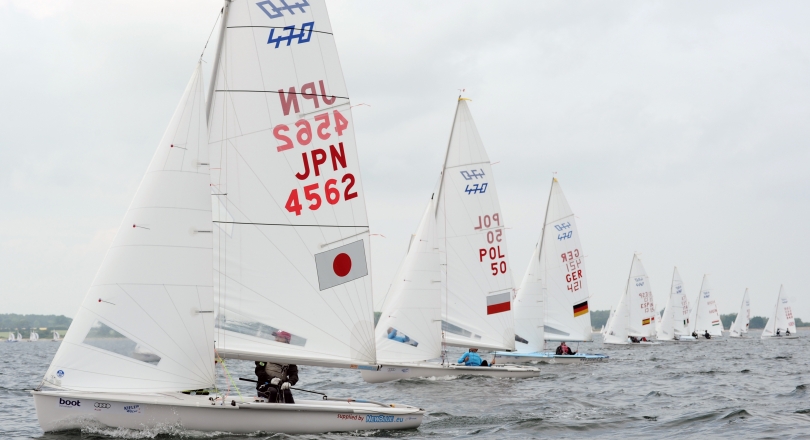 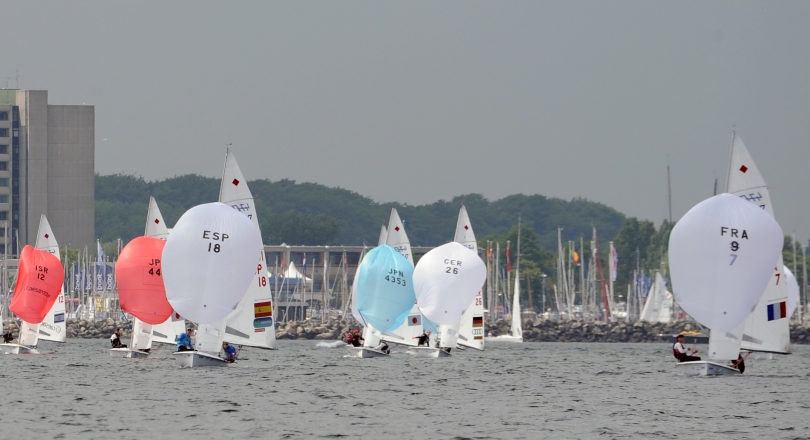 Eighty of the world’s top 470 junior talent faced off on day 1 of the 2016 470 Junior World Championship in Kiel, Germany today, Wednesday 22 June.

Featuring the best 470 teams aged 23 and under, the starting line-up counts 22 nations, including defending 470 Junior World Champions Guillaume Pirouelle/Valentin Sipan (FRA) in the 470 Men and Benedetta Di Salle/Alessandra Dubbini (ITA) in the 470 Women. The gold medallists are facing some of their closest rivals, including three of the other podium teams from 2015. Joining the large contingent of European nations are teams from Australia, Brazil Japan, Malaysia, New Zealand, Singapore and South Africa.

The clouds overhead were pulling the offshore breeze around creating big shifts and changes in wind pressure. With 6-8 knots on the start line for the first race of the day, the breeze built slightly but the third race was erratic, with changes coming through quickly.

The reigning Champions opened their defence in the shifty, streaky breeze, which proved difficult to read, and both racked up modest opening scores. Reflecting the changeable winds, Benedetta di Salla/Alessandra Dubbini (ITA) opened their assault with a 24, before climbing back through the pack to score a 14,3.

France’s Guillaume Pirouelle/Valentin Sipan struggled in the first race of the series, finding themselves on the wrong side of the first windshift. Although they fought back to third at the first leeward mark, they were in the back third of the pack by the finish.

“It was very difficult with the wind blowing off the shore, very difficult,” grimaced Pirouelle. “The first race we were just not in the right place on the course. We had a bad first upwind, but came back to third on the downwind and then had another bad upwind. It was just difficult.”

Germany’s Malte Winkel/Matti Cipra showcased the benefit of their weeks of training on home waters, when they sailed to a pair of confident wins to lead the class by one point ahead of Japan’s Keiju Okada/Naoya Kimura who scored a 2,1,2.

The Winkel/Cipra partnership has shown a steady escalation on performance, bronze at the 2014 470 Junior Worlds and silver last year, and are amongst the podium favourites again this year. An upgrade to Gold on home waters is what the pair has in their sights.

“The Junior Worlds in Kiel are the perfect farewell from the junior class for us,” explained Winkel about their last year eligible to compete in the under 24 age division. “We are very much looking forward to the event. After silver and bronze we are now aiming for gold in Kiel", he concluded with a wry smile.

“We were lucky today,” smiled Okada. “We picked the side where the wind was each time and sailed fast.”

Amongst the young Japanese talent also featuring in the fleet are Daichi Takayama/Akira Takayanagi. Takayama showed huge form at last year’s 420 Worlds in Japan, muscling his way through to take gold. Takayama is known for stunning boat speed in a breeze, so teams will need to keep quite a close eye on this young pair as they will inevitably press the fleet around the track.

Leading the 470 Women are France’s Marina Lefort/Lara Granier counting a  1,2,10 scorecard. The race discard kicked in after race 3, enabling the pair to discount their tenth place, and they will be keen to avoid another double digit score.

Greece’s Maria Bozi/Rafailina Klonaridou seized the most consistent results of the day, with top finishes of 3,3 and 4 set to reward them further as the series unfolds.

“It was a very tough start to the regatta, very difficult,” commented Bozi. “We were a little bit lucky but we did well following the gusts and staying in the wind pressure.”

Catch up with the live streaming from today’s racing at: http://www.kielerwoche.tv

About the 2016 470 Junior World Championship
The 2016 470 Junior World Championship is organized by Kieler Yacht-Club in co-operation with the International 470 Class Association, 20-27 June 2016, Kiel, Germany. The racing format is a 10 race series scheduled for the 470 Men and 470 Women fleets, followed by the medal race for the top ten teams in each fleet and a final race for the other teams. The men’s fleet are seeded into yellow and blue fleet for the qualifying series, before being split into gold and silver for the final series, with the women racing a single fleet series. 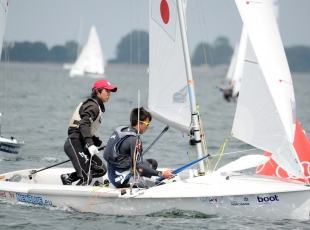