It was a tense morning waiting to see if there would be any racing for day three of the Delta Lloyd Junior 470 World Championships in Medemblik, Holland. 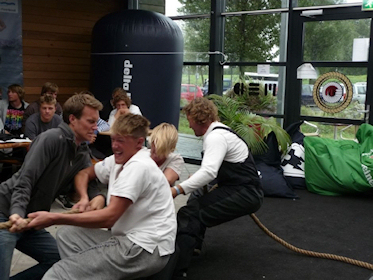 The 92 teams from 26 nations had already been through two hard days of qualifying and today was meant to mark the end of the qualification phase, but after waiting until 1400 hours the Race Committee decided to cancel all races for the day.

With the wind up and the visibility down, the sailors were relieved not to have to race. Defending girls world champion, Josephine Bach from Germany, said, “We are happy that we don’t have to sail today as we expect the wind to drop during the next days and we are faster in light winds.”

For some it was an opportunity to catch up on boat work and repairs, with a number of crews having suffered from broken masts and torn sails over the previous two windy days of competition.

With the lack of racing, other sailors vented their competitive spirit on an international game of ‘Tug of War’, with four-person teams from Hungary, Germany, Poland, Sweden, and two from the host nation, the Netherlands.

After the knock-out phase, Poland took bronze, Hungary silver and Sweden gold, the team made up of Per Frykholm, Tom Diedrichs, Wilhelm Johannisson and Nicklas Dackhammar. Dackhammar is also lying in second overall in the Championship behind Britain’s Phil Sparks and David Kohler.

Tomorrow the strong wind and the driving rain are set to disappear, and instead the fleet is looking forward to clearer skies and moderate westerly winds. The race committee plans to extend the qualification phase of the regatta, with a schedule of two races for the Men's/Mixed division and three races for the Women.