A frustrating day of light winds and rain yielded just one race but plenty of leaderboard changes on day five of the Delta Lloyd Junior 470 World Championships in Holland. Italian teams won both the Men’s and Women’s heats today. 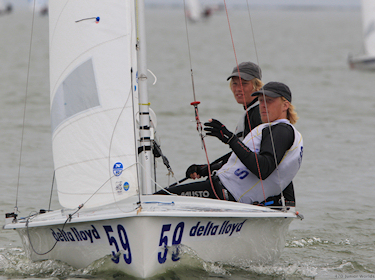 It was the first day of Gold fleet racing in the Men's/Mixed division, and all week the Swedish team, Nicklas Dackhammar and Fredrik Bergstrom have been threatening to steal the lead from their British rivals, Phil Sparks and David Kohler.

This was breakthrough day for the Swedes, who again demonstrated their prowess in the light airs despite being one of the heaviest and tallest of the 92 teams competing in Medemblik. They won today’s only heat ahead of Italians David Vignone and Matteo Ramian, with Sparks and Kohler a very distant 14th. Bergstrom believes he and his helmsman bring complementary skills to the boat: “I think than when Nicklas sailed the Optimist and the Europe dinghies, he was very good in light wind conditions, and when I sailed Optimist and Europe, I was very good in strong wind conditions. So I think he has pretty good feeling with the rudder and the mainsheet, and that’s why I think we are pretty fast and good sailors in light wind as well as strong.”

Suddenly the Swedish lead looks very comfortable, just 9 points compared with the British on 21 points. After falling foul of the black flag yesterday, Sparks is now forced to count today’s 14th place. Vignone’s 2nd place moves the Italian up into the top six. “We prefer light wind, because we are very light and we have problems sailing in strong winds like we had a few days ago,” he said. “It’s difficult to keep your focus in these conditions but you must do it, if you want to win. It was hard to decide our tactics before the start, but we sailed for where we though the best wind was and actually we were lucky.”

Roberta Caputo and Benedetta Barbiero from Italy won the only Girls race, moving the Italians up to 10th overall. Series leaders Annika Bochmann and Anika Lorenz scored a solid 5th place, nothing spectacular but a whole lot more desirable than the alternative scored by some of their closest rivals. Lorenz commented: “We finished in 9th place but there were many black flags in front of us, so we came 5th. It was a stable result and we were lucky.” Among the black flag casualties were two of their closest rivals for the championship: early series leaders Nina Keijzer and Anneloes van Veen, and reigning Junior 470 World Champions Victoria Jurczok and Josephine Bach.

“We knew we were black flagged as we heard it on the race committee boat during the start,” said Jurczok. “But we will ask for redress because it was really not our fault. The Greek girls pushed us over the line and we tried to get redress but I think it will not work because we don’t have any damage - even if the Greek girls are prepared to be our witnesses.”

Behind the Italians in today’s fluky race were British team Amy Seabright and Eilidh McIntyre in 2nd, with the Australians Sasha Ryan and Chelsea Hall in 3rd. This moves the Aussies up to 2nd overall, within striking distance of the leading Germans, and a few points ahead of another British team, Anna Burnett and Flora Stewart in 3rd overall. Ryan was pleased to have avoided the curse of the black flag today. “We knew from 40 seconds before the start that there was a bunch of boats over the line. We just started a bit further down the line, as it was clear that there would be many boats over.”

Today’s racing in ultra-light winds caused a lot of frustration and even series leader Lorenz was hoping they wouldn’t have to face those kind of conditions again this week. “I think it would be better to race just eight or nine fair races instead of trying to complete a full series of 12 races. When the wind is dropping and coming from another side and shifting about 90 degrees, that is not fair, that is not sailing. So we would like to have fewer races, but at least fair races.”

The Championship concludes with Medal Races on 28 July 2011.