After a long winding journey in a parade of sail down the Swan River from Perth to Fremantle, the ISAF Flag was hoisted at sunset to the top of Fremantle’s Round House to mark the beginning of the Perth 2011 ISAF Sailing World Championships. 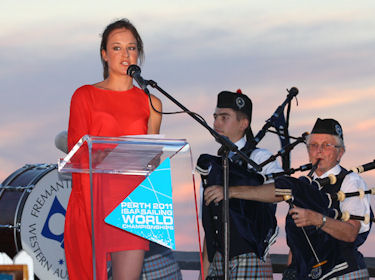 The flag was bought ashore in spectacular fashion by current Men’s RS:X world champion Piotr Myszka (POL). At the beach in Bathers Bay it was handed to 2008 Olympic 470 gold medallist Elise Rechichi (AUS).

Against the backdrop of a brilliant orange sky and with the strains of Dr Richard Walley playing the didgeridoo, Naval cadets from the T.S. Perth escorted the flag along Bathers Beach and up to the flag pole at Fremantle’s historic Round House.

Several hundred people watched as a procession of flag-bearers from each nation competing at the ISAF Worlds followed behind.

The ISAF flag was presented by Elise Rechichi to Fremantle Mayor Brad Petitt and raised as the pipe band played Waltzing Matilda. Mayor Petitt wished the sailors “fair winds and great competition over the next 16 days".

Once the flag was raised a ceremonial cannon was fired with fireworks lighting up the orange sky.

A 100-year-old lady started off the parade of sail down the Swan River earlier in the day following the official opening ceremony in Perth’s Forrest Place. The lady leading the parade was the century old Mercedes, which was book-ended with the wonderfully restored Acrospire, painting a picture of West Australian sailing through the decades.

Perth sailing clubs had the honour of escorting the ISAF flag in acknowledgement of their contribution to staging the Worlds.

Arriving in Fremantle’s Inner Harbour at sunset and with the historic Endeavour replica anchored nearby, the parade was met by a fleet comprising the 10 Olympic classes competing in the Perth 2011 ISAF Sailing World Championships.

A fireworks display and a free concert in the Worlds Village set the scene for an action-packed two weeks of elite sailing competition.