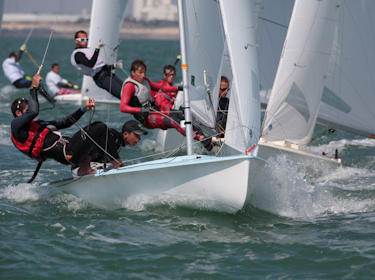 Sudden illness for 2nd placed Berenger Balzeau took him out of racing at the 470 Junior European Championships today, with the local sailor from La Rochelle having to make an unexpected visit to hospital.

His crew Mathieu Fountaine hoped that they would be back on the water again tomorrow, but admitted his hopes for winning this regatta were now gone. With Gold Fleet racing starting today, the French team had been hoping to fight for the lead in the championship. “It was a shame not to race today,” said Fountaine, “but at least Berenger seems to be better. Unfortunately for us the race committee decided to hold an extra race this afternoon, so we have three DNC scores. Maybe we can still make it to the Medal Race, but it will be difficult.”

Those three DNCs have sent the lads from La Rochelle plummeting down the rankings from 2nd to 23rd overall, although some other local talent - Kevin Peponnet and Julien Lebrun - have taken up the fight in 2nd place overall. After a mediocre 18th in the first race, followed by a disastrous black flag disqualification, Peponnet and Lebrun made amends in the best way possible, with a race win.

That victory makes them the first team to have taken a race off the previously unstoppable Sofian Bouvet and Jérémie Mion, who have now blotted their copybook of perfect 1sts with a - horror of horrors - a 2nd place in the last race! Eight race wins now, and discarding a 2nd place, the boys from Antibes are on fire.

At 140kg they are not light, not by 470 standards, and yet Mion said they felt just as comfortable in today’s lighter semi-trapezing breezes as they had in the windier heats of the first three days. “We have good technique downwind, we work well on the waves, and so we are happy in these conditions,” said Mion, allowing himself a celebratory beer after a long day at sea.

In stark contrast to the dazzling consistency of the regatta leaders, the chasing pack were saddled with a wayward set of scores. The previous evening the Italian sailors, Simon Sivitz Kosuta and Jas Farneti, were celebrating a race win. This evening they were wondering what had gone wrong, with scores of 35,37,15 sending them tumbling to 10th overall. “I think we did too much training before this regatta,” said Kosuta. “We have sailed too much and now we are tired. But for the last race our coach raised our morale. The pressure is off because we know the chance of a medal is gone, so now we will race to make sure we are in the Medal Race.”

In the girl’s battle, Annika Bochmann and Anika Lorenz sailed an unspectacular day but did enough to retain their lead over the other three girls’ teams that made the cut for Gold Fleet. Biggest gainers were British duo Frances Peters and Eilidh McIntyre who now lie 2nd of the girls, 16 points behind the Germans. “It was nice to have a bit of different conditions, we felt fast in the lighter stuff,” said Peters, although having driven straight from Skandia Sail for Gold in Weymouth to this regatta without a break, she is trying to remember what life on dry land must be like.

With the 86 boat fleet now split into Gold and Silver, there is another battle going on further down the rankings. After a stunning scoreline of 6,5,2, Italian girls Camilla Marino and Anna-Gracia Malventi lead Silver Fleet, the only team to have kept all their scores in the top 10. Spanish boys David Gestoso and Isaac Arce are just a point behind in the overall rankings, with another girls’ team Rosita Bakker and Jeske Kisters in third overall.

Race officer Alain Corcuff was pleased to have got one race ahead of schedule today, with very light winds predicted for the next two days. Three races of fleet racing remain for Gold Fleet before the top 10 move forward to the Medal Race showdown on Friday.