Strong Winds And Racing Off In Melbourne 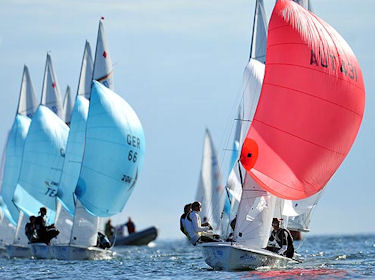 After a delay this morning due to strong winds the Sail Melbourne race committee announced at 1130 hours that racing at the ISAF Sailing World Cup had been called off on day 3. The reaction from most competitors was one of relief, as they huddled out of the rain and the howling winds.

The Bureau of Meteorology has been tracking a cold front that is due to cross the Melbourne area early this afternoon. The current winds, already gusting over 30 knots, are predicted to increase throughout the afternoon before moderating later this evening.

So, after two days of racing in the 470 fleet, Mathew Belcher and Malcolm Page continue to hold a two point lead over Americans Stuart McNay and Graham Biehl in light breeze off of Sandringham Yacht Club.

“It was nice to get back on schedule, and we’ve now had four good races over the last two days,” said Page reflecting on day 2 of racing. “From here on we’ll be aiming to hold on to our lead, we’re trying some new equipment so have to develop that, develop ourselves within the boat as well so hopefully if we get a good performance in the rest comes in to play and the results will speak for themselves."

Belcher said that the pair were please with where they sit after two tricky days of racing. “It was a difficult day, one of those conditions where you have a fighting sea breeze starting to build up,” said Belcher. “There was a lot in where you went on the course and we came away ok. It didn’t feel that good but you have those days and with a one, two, three it was alright.”

“Overall we’re feeling good, the goal this year was to win the Worlds and the next goal is the Farr 40 Worlds with Mal so we’re trying to do a bit of both but it’s feeling good, we’re slowly getting back into it,” he said.

Over in the women's 470 fleet, Sylvia Vogl and Carolina Flatscher (AUT) continue to sit top at the head of the fleet. Anina Wagner and Marlene Steinherr (GER) are in second place, with China's Hui Men Feng and Li Zhu Huang in third.

Racing will commence at 1100 hours on Thursday 16 December, an hour earlier than scheduled.

The forecast for the remainder of the week is good, with winds of between 10 and 20 knots. This should allow the race committee to make up some of the lost races and will ensure fair racing.