Shifty conditions were the order of the day for the 470 women’s teams, with some topsy turvy results the outcome on a tricky race day. 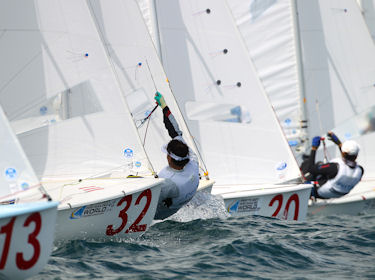 Big wind shifts and localized pressure delivered a bit of a window of chance as teams hunted down the advantages around the race track. 2011 470 European Champions, Tara Pacheco/Berta Betanzos from Spain continue to set the pace and deliver continuity in their racing form to lead the 48 boat fleet at the 2011 470 World Championships after 6 races completed and scored another strong 3,4 today.

Commenting on their form, Betanzos said, “Yes we are pleased. The last race was really tricky and we tried to do good sailing and be confident with our decisions – we did a good job.” They were first around the windward mark in race 6, but then Betanzos admitted that they were slow downwind and boats passed them. Regardless, Pacheco/Betanzos are the only team to post a scoreline of top 10 places, with all the chasing teams showing at least one score in the twenties. The race discard which came into play after race 5, closes the point margins, but there is no room for more mistakes from the other top teams, whilst Pacheco/Betanzos have earned themselves breathing space and can afford to throw a race without drastically impacting their position.

Race 5 got started under a blue sky and the distinctive Fremantle turquoise waters with around a 10 knot breeze. The shifting wind forced a resetting of the course, which was followed by two general recalls before the black flag went up for starting attempt number three. The penalty flag disqualified three teams who were penalized for being over the line.

The limelight in race 5 went to the world ranked #25 team of Gil Cohen/Vered Buskila from Israel, who led from start to finish with no opening given to any other teams. Battle unfolded behind the Israelis with Ai Kondo/Wakako Tabata (JPN), the Spanish, Ingrid Petitjean/Nadege Douroux (FRA) and Erin Maxwell/ Isabelle Kinsolving (USA) fighting for the top slots and exchanging positions throughout, although ultimately it was finishing order Japan, Spain behind Israel’s race win, with the USA in fourth.

Commenting on their win, Buskila said, “The first race was really difficult to decide which side was going to be better before the race and everyone was really uncertain as to where they wanted to go. We just felt that the left was better, so we went big, started at the pin and good speed gave us the possibility to gain some distance. It was then easy to control the race.”

A familiar face out on the race track was recently crowned 470 World Champion Mat Belcher (AUS), who was supporting wife Friederike. Friederike is racing with Kathrin Kadelbach and hoping to secure Olympic selection for Germany. Perhaps coincidence, but race 5 did see them post their best result of the series so far, although Friederike is not distracted by Mat’s presence, saying, “We did see him, but we had a lot to focus on ourselves so didn’t really see him much. There were big changes in that race and big pressure changes most of all.”

Cloud came over and the wind dropped to around 6-8 knots just before race 6, picking up to about 10 knots as the fleet went up the first windward leg. The race was all about reading the pressure, and surprisingly the Israelis rounded the first windward mark last overall in a complete reversal of fortunes compared to race 5. The reasons for their initial tumble were multiple, but some impressive sailing saw them claw their way back up the fleet to finish in eighth, and with it drive themselves up to fourth overall on the leader board by the end of the day.

Israel’s Buskila felt race 6 was actually a better outcome for the team, compared to their win in race 5, explaining, “I think the first race we said the left was good and on the second race we thought the right would be better and then we were proved wrong. Also we took some bad decisions and were too persistent in staying to the right. There was a lot of pressure on the left and our mistake was that halfway up the upwind we should have gone left and then maybe we would have rounded in 20th rather than last, but also our start was terrible – we felt as though everyone was swallowing us on the start line. On the second upwind we started to make good decisions and from the middle of the leg we started to gain boats.”

Race 6 was anybody’s game with the lead swapping between teams from China, Slovenia, Great Britain, Spain and Ukraine. At the final gate before the finish line, the world ranked #29 team of Jo Aleh/Olivia Powrie (NZL) took the lead and held it over the line. It was a hard win, as Powrie explained, “It was a close race, everyone was really close together the whole way and we kept gaining and losing our lead. We tried to keep good spacing and stay away from everyone else as best we could.”

Thursday 15 December is a reserve day, before racing gets underway again on Friday 16 December at 1100 hours on Centre Course for races 7 and 8. Friday’s racing will be a crunch day as the teams jostle to secure nation qualification for the Olympics, and with only 14 places on offer here in Perth the pressure is increasing.