The reigning 470 European Champions Tara Pacheco/Berta Betanzos from Spain sailed a stunner of a day to win both races 3 and 4 today out on Success Course area, and with it leap to the top of the overall leaderboard. 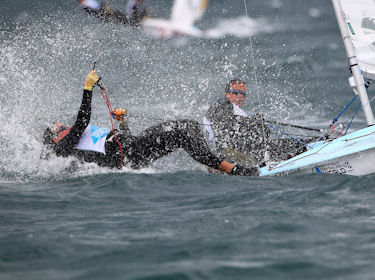 Overall, the same teams from yesterday's racing remain in the top 5 of the leaderboard, but in a different order.

Perfect sailing conditions of 18-20 knots delivered exciting and very fast racing around the windward/leeward course. The 470 Women’s fleet are sailing as one fleet, through until the Medal Race on Sunday which will see only the top 10 boats competing.

Days don’t get much better, “No for sure,” affirmed Betanzos. “It was hard as in the first race we were fighting with the British, Italians and Germans, but in the end we could take it. The British passed us in the downwind, but finally we passed them on the inside. We were too fast,” Betanzos continued. “We were pleased with our speed and sailed the boat really well.” Betanzos would not compare their gold medal winning form at the 2011 470 European Championships a few months ago with their performance so far in Perth, commenting , “Yeh, but this is long and it is the beginning and you never know. “

Race 3 wasn’t an easy success for the Spanish as they battled with Giulia Conti/Giovanna Micol (ITA) and Penny Clark/Katrina Hughes (GBR) for the overall lead, finishing second and third respectively.

In with a chance over the first four legs of race 3 were Tina Lutz/Susann Beucke (GER) as the top four places rotated amongst the teams. Lutz/Beucke ended race 3 in fourth and followed it up with a 15th in race 4 to move up the leader board to twelfth.

Lutz/Beucke team broke into the world’s top 10 ranked teams in June 2011 and are here in Perth hoping to secure Germany’s nation qualification and Olympic selection over their team mates Kathrin Kadelbach/Friederike Belcher. If the name sounds familiar, it is, as Friederike is married to Mat Belcher who just three days ago claimed the Men’s 470 World Championship. Mat has stayed on in Perth to support his wife.

Meanwhile supporting the Lutz/Beucke is Zebra who can be found onboard Tina and Susann’s 470, as team figurehead. The Zebra theme flows throughout their boat – from Zebra deck decals to black and white lines! In with a hit at taking the race win, Beucke said, “We rounded the top mark second, but the other teams caught us on the downwind.” In race 4 they converted a 29th place at the first mark to a 16th by the finish, which Beucke put down to, “We have quite good boat speed upwind and we just tried to sail the shifts and had some luck. We will just sail our own race and see how it comes together at the end with our points.”

Only six years ago Lutz could be found at the helm of her Optimist dinghy winning the 2005 Optimist World Championships, and now the Olympics beckon.

Race 4 again belonged to the Spanish, who secured supremacy from mark 1. It was another really close battle at the front, but this time with Gil Cohen/Vered Buskila (ISR) and defending World Champions Lisa Westerhof/Lobke Berkhout (NED), with the race finishing in that order.

The only team in the 470 Women’s boat park who is already guaranteed to go to the 2012 Olympics are Hannah Mills/Saskia Clark, who will be representing host nation Great Britain. Four top ten scores places them in sixth overall at the end of day 2, but gear failure unseated them a bit today, as Clark explained, “We lost our port trapeze wire at the top of the first beat so we had to spend the whole race swinging it round. And then on the final run we lost our starboard run as well, so we had to the reach without a spinnaker and hike it down. The culprit was a slipped knot that came undone and so I went for a swim and it was a bit confusing to start with as we couldn’t work out what had happened. Really stupid gear failure.”

Australians eyes are following Elise Rechichi/Belinda Stowell around the trace track. Individually they have achieved Olympic and World Championship glory and together they have the potential for further greatness. As a new pairing they are yet to show the pace which has secured medals in their past and for them the 2011 470 World Championships is primarily about 2012 Olympic nation qualification and selection, as Rechichi explained, “Guaranteed Olympic selection for us is a top 6 finish. If we make the top ten we make the Australian Sailing Team and it is discretionary from there. Outside of the top 10 and I think the chances are pretty slim to go to the Games.”

Rechichi who is participating in her seventh 470 World Championships used just four words to sum up yesterday’s 23,28 scorecard, “What a disaster.” But today was an improvement, “I was disappointed yesterday because the results were bad and we raced so far below our ability. I felt bad for our coach even having to watch. The results today were not amazing but certainly much, much better than yesterday and we were actually in the game today and pushing and racing in our normal style. We still gave a few places away, but we were under no illusion at the start of this regatta that there were going to be plenty of mistakes made by us and we would have to minimise the damage and take our opportunities when we had them.”

Sailing pedigrees in the fleet don’t get much better than the Rechichi/Stowell partnership, who combine multiple Olympic and World Championship successes. Responding to how they have combined their vast talent and experience to kick start their campaign, Stowell said, “Having the knowledge and the experience of how to perform in different situations is definitely a benefit and understanding that we are both off the same page, so we have very similar mind sets in a lot of situations and our approach to the whole campaign is very similar.”

Racing continues on Wednesday 14 December 2011 with races 5 and 6 out on Success Course area starting from 1430 hours.