With the top six teams all in with a shot at the medals and the points margins giving no guarantee of the gold medal to the Spanish, it was nailbiting.

This news belongs to
Perth 2011 ISAF Sailing World Championships
ALL EVENT INFORMATION
All was set for an exciting Medal Race day out on Centre Course and the crowds weren't disappointed. 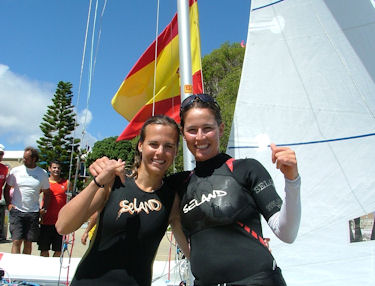 The 10 teams racing on Centre Course to decide the medals for the 2011 470 World Championships in the women’s event couldn’t have asked for better conditions today. Fremantle delivered its best, with a 17-18 knot breeze under a blue sky and turquoise sea. Medals went to Spain, Great Britain and New Zealand.

Crowds lined the harbour wall and filled the grandstand, with massive applause as the teams were released from the harbour and sailed out onto the race course. Double-points scoring, the top four teams all able to secure gold and any one of the top six teams in with a medal chance, racing was set to be close.

The 470 Women Medal Race got underway at 1310 hours, with two individual recalls requiring Jo Aleh/Olivia Powrie (NZL) and Martine Grael/Isabel Swan (BRA) to turn their boats around and re-cross the line. Precious seconds lost as they completed their manoeuvres and then had to focus on punching up the first leg to the rest of the fleet.

In with a chance of a medal if they could work their way back up, Aleh/Powrie worked hard and after the first two legs had incredibly shifted into second overall. Despite losing one place at the finish, to the Australian pairing of Elise Rechichi/Belinda Stowell, they finished the race in third and safely claimed the bronze medal.

The New Zealanders won the silver medal at the 2010 470 World Championship, which may explain Aleh’s relative calmness about the medal outcome. “We are hoping for a better year next year. Our main objective here was to qualify New Zealand and then secure a top ten place, and hopefully we will be selected for the Olympics.”

All the Spanish needed to do to claim the gold medal was finish no lower than ninth. The only way Great Britain’s Hannah Mills/Saskia Clark could leapfrog them to gold was if they won the race and the Spanish finished last. A relatively safe start to the Medal Race saw Pacheco/Betanzos round the first mark in third overall, before dropping back to at one stage to ninth. Another drop back to tenth and, with Mills/Clark at the front of the fleet, they would lose the gold medal.

Betanzos acknowledged the rollercoaster ride they gave themselves in the Medal Race, “If we could have been first or in the top three it would have been great. We lost it in the first downwind and we had to keep working where we were and we did the best we could and had to take care of the Israel team.”

An amazing end to the year for Tara Pacheco/Berta Betanzos in which they did the double, securing both the 470 World Championship and 470 European Championship titles. The team have been racing together for about four years and at 23 years old each are amongst the youngest teams in the fleet. They led the Championship from start to finish, with the only slip up on their scorecard being a 27th in race 7.

Dramatic scenes ensued after their race finish, with a Spanish supporter leaping into the water to hand over a national flag, and a whole contingent of Spanish team members, including the President of the Spanish Sailing Federation, cheering from the grandstand.

Betanzos added, “For us it is what we work for and finally we got it. We are really happy but we don’t want to stop here, we want to continue.” This team have laid down the gauntlet to the 470 women’s fleet and their mission in Weymouth is clear, Olympic gold is firmly on their checklist.

Pacheco gave due credit to their coach’s role, saying, “He is the most important person in our team. That we are here, is because of his job.”

An even more inspiring victory, as Pacheco has only recently returned from a hand injury, sustained sailing, which resulted in pins through her hand and a break from training for a month. Fortunately the team had completed their pre-Championship preparation, so could just focus on Pacheco’s recovery.

Great Britain’s Hannah Mills/Saskia Clark shone today, led the fleet around the race course, and stormed to medal race victory and secured the silver medal. Whilst individually they are both hugely experienced in the 470, Clark already has the 2008 Olympics to her career, they only partnered up in April 2011. They came into the Championship as the only team of the 48 boat fleet who was already guaranteed a slot at the 2012 Olympic Games, due to Great Britain’s host nation status, so were not under the pressure of Olympic selection.

For Clark this result is an upgrade on the bronze medal she achieved at the 2007 470 Worlds with her previous racing partner. Commenting on the race, she said, “It was awesome. We had a bit of a wobbly patch at the second beat, we felt like we were on the wrong pin as the wind dropped a bit and we caught some weed. But we just managed to keep our nose in front of the Kiwis on the downwind leg and then we managed to pull away again so it was good.” This team certainly stand out from the fleet with their downwind performance which gives them great pace, but today Clark put their start to finish dominance down to their start, explaining, “We were pretty clear on our starting strategy and we really nailed it.”

Clark was rushing straight from her 470 racing to watch the Laser Medal Race, where boyfriend Paul Goodison (GBR) was racing and finished 5th overall on the leader board.

Commenting on what a World Championship silver medal means for her personally, Clark said, “This year went really well, but because of the timescale it was pretty stressful to get our campaign up. We really feel like we ground out a result here.”

Major disappointment for Gil Cohen/Vered Buskila (ISR) who went from full medal contention to finish the medal race in last position and end their Championship campaign in fourth, 3 points behind the bronze medallists.

An outstanding conclusion to a stunning week of racing from the 48 boat women’s fleet. Of the 28 nations represented in Perth, the fourteen nations qualified to the 2012 Olympic Games (in order of qualification) are: Spain, Israel, New Zealand, Japan, Italy, Brazil, Australia, Netherlands, France, USA, Sweden, Argentina, Slovenia, Germany.