The South African”Race Ahead” team of Jim Asenathi and Roger Hudson are special. RaceAhead as a concept began at a time when extraordinary young sailing talents were emerging from impressive grass-roots sailing schools and clubs across South Africa. 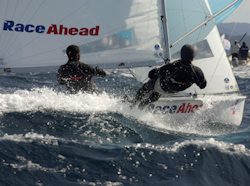 The RaceAhead philosophy is that talented and motivated young South African sailors campaigning alongside more accomplished and experienced international sailors will bring great learning and great results, and through this more young talent will be inspired to pursue the sport in South Africa. 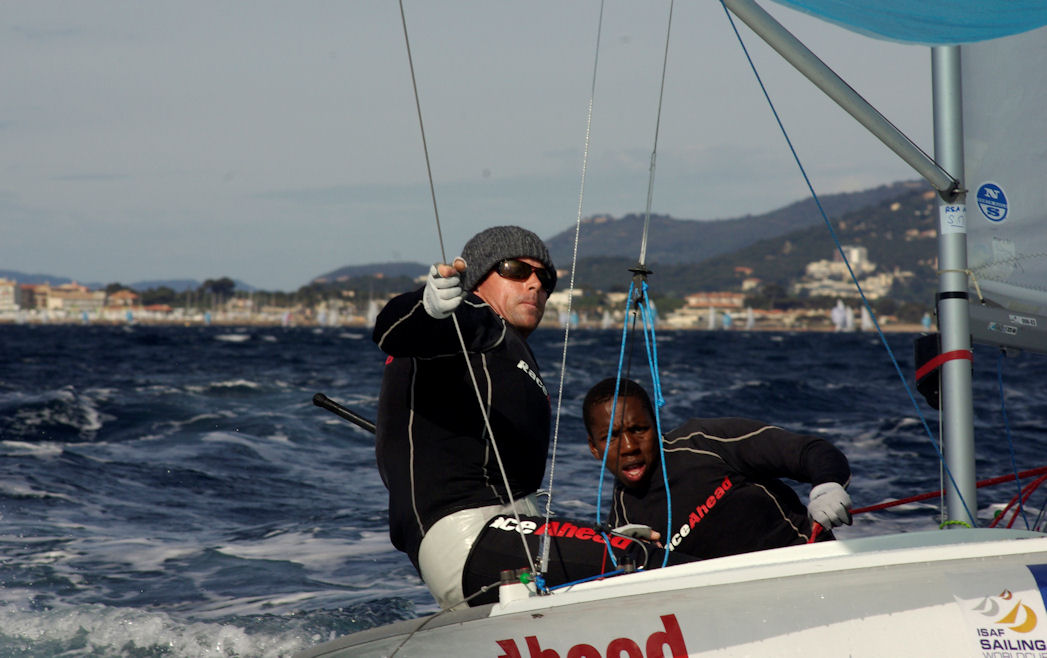 Here in Barcelona at the 2012 470 World Championships Asenathi, otherwise known as Squirrel, and Roger have their eyes firmly set on qualifying South Africa for the 2012 Olympics. Here is their latest campaign update:

“We’re just a couple of days away from the start of the 470 Worlds Championships here in Barcelona and we’re taking it pretty easy at this stage. The boat is safely tucked under its cover and primed for the competition and our 10 days of training here are complete.

We arrived in Barcelona relatively early, 13 days before the first race and only a couple of days after the Hyeres World Cup event in France. We were among the earlier arrivals, but not the first. Two of the Japanese teams were hard at work when we arrived, churning through their brutal day-in-day-out training plan that you could set your watch by. There were some late arrivals too. Like the successful Israeli team putting in just one or two days of sailing, working an angle to stay very fresh for the event. And all the many teams with an approach somewhere in between. This is one of the defining features of life on the Olympic sailing circuit. There are virtually takers for every plan, every approach, for every tactic and idea. There are takers for both extreme sides of the course, and for every inch of ground in the middle, for every gybe-set opportunity, for every early tack and so on and all the time everyone is right on everyone’s heels ready to strike, ready to take advantage of every tiny mistake. This is competition in a very pure form and it all comes down to who is that bit quicker, that bit smarter, that bit better prepared and to a large extent it comes down to who can execute that bit better in the key moment. There are several 15-year circuit veterans here who know all the tricks. Some of them seem infallible, but equally some of them seem to be burning out, almost suffering from the knowledge of too many tricks. There are also the handful of 20 year-olds with the energy and raw power of youth that goes with the belief that anything is possible. And there are all sorts of teams in between these extremes. And it’s all about to go into the washing machine for 12 races. There are a few teams that you could safely lay your money on to perform, but there is also a big bulk of uncertainty. In the two recent Wold Cup events in Palma and Hyeres, the variation in finishing positions was massive, for example 29th at Palma was 3rd at the Hyeres, and 8th at Hyeres was 48th at Palma and so on. This World Championship is filled with plots and sub-plots. The fight will be on to see which one of the top teams will go to the Olympics as the reigning world champions. But in a sub-plot here several sets of training partners for qualified countries will face straight shoot-outs to see which of them will represent that country at the Olympics. Very dramatic. And in another sub-plot 20 countries will compete to secure the final 7 Olympic qualification slots for London 2012. This is where we come in. 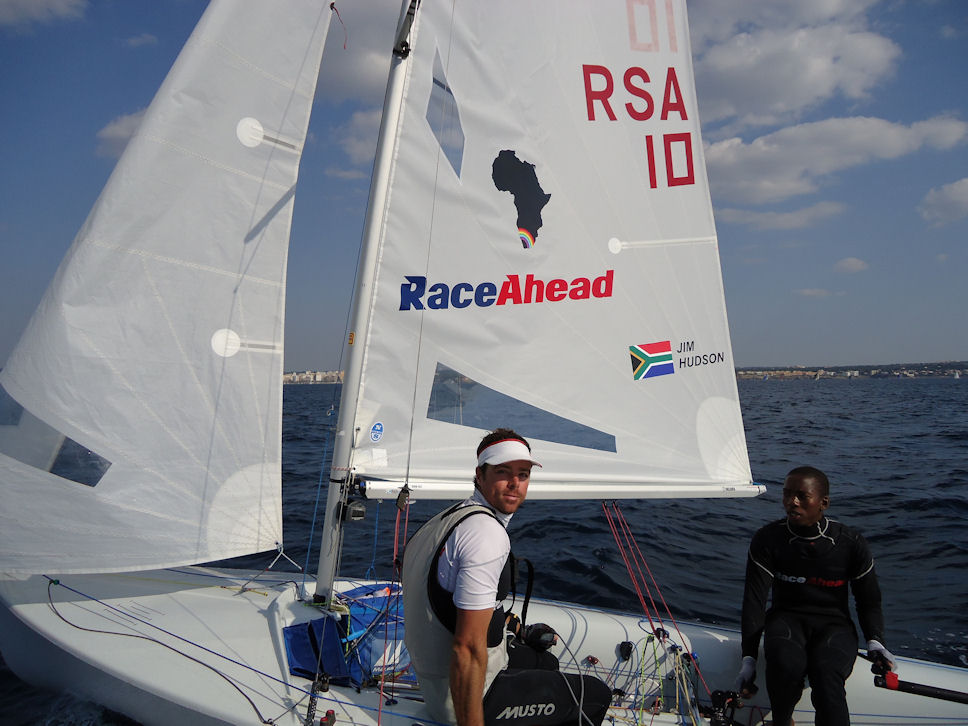 It is an unlikely story. Around 15 months ago two South Africans from the most diverse of background combined through a deep passion for a shared goal. We made a plan try to do in 18 months what is generally considered to be a minimum 4 year project and in some cases has taken 10 years. The target was to qualify South Africa for the London 2012 Olympics in the 470 Sailing category. We packed the schedule tight and aimed for the highest possible intensity and started executing the plan.

In these 15 months we’ve competed in 15 events around the world including Holland, the UK, Germany, Finland, Australia, the USA, Spain and France and additionally we’ve completed 175 days of training. Our ranking has moved up from 213th a year ago to 60th today, the most recent move up 15 places 10 days ago. Along the way there have been times of great progress and success and also inevitably some painful mistakes and frustrations. But we’ve both stuck resolutely to the commitment we made at the outset and we’ve not taken our eyes off the goal.

There are 27 allocated country slots for the 470 class at the London Olympic Games. Of these, 20 countries already qualified at the Perth 2011 World Championships. This week in Barcelona is the opportunity for the final 7 countries to secure their country slot in for the Games. At the Perth World Championship we finished inside the top 27 countries, and again two weeks ago at the Hyeres Grade 1 WC event in France we were inside the top 27 countries. This is positive, but in sport you never quite know which way the ball will bounce. And in sailing every team has strengths and weaknesses in different conditions. The forecasts are in and this week in Barcelona it looks like the wind is going to be light. This would not be our first choice as a couple of sailors from windy Cape Town, but we’re ready to play the cards we’re dealt as best we can and to enjoy the contest.

What will happen if we make it? We will be overjoyed and we will start immediately to focus on the Olympic event. 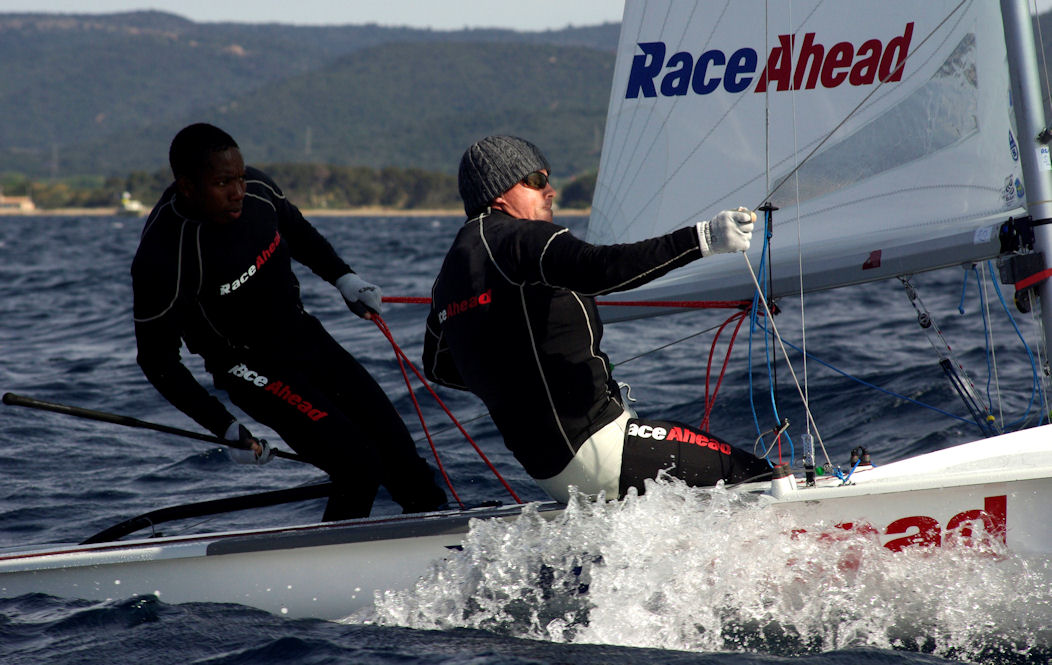 What will happen if we don’t make it? It’s important to say at this stage that our commitment goes well beyond this goal. We decided last year that no matter what happens at this event, we will complete the 2012 season and go on to collaboratively develop a plan to see a very competitive South African 470 at the Rio 2016 Olympics. So we will be at the Delta Lloyd World Cup event in Holland the week after Barcelona and then at the Sail for Gold World Cup event in the UK and at the other remaining major 470 events in the 2012 calendar. Asenathi is young at 20 years old and he is currently gaining a massive amount of extremely valuable experience in the sailing world. Every European event and European tour season behind him will add the critical building blocks to enable him to realise his significant long term potential. His story so far is unique and inspirational and the vision we have built together goes far beyond London 2012. We believe that by 2020 Asenathi could be an Olympic medallist, an icon of African sailing and an inspiration to many in the sport across the continent. He has the potential to prove that no matter where you come from, with hard work and the right partners and the right plan, wild dreams are achievable. But before any of this can come to reality, many steps need to be taken and many bridges need to be crossed. In our hearts we know that achieving this goal and competing at London 2012 will be the perfect platform from which to launch the next steps. And that is why we are giving this absolutely everything we have. But whatever happens here in Barcelona, we will keep to our commitments.

We’d like to say thanks again to everyone for all the support and encouragement – we really appreciate it. Especially to David Beresford Hudson the Old Man for being such a solid rock.