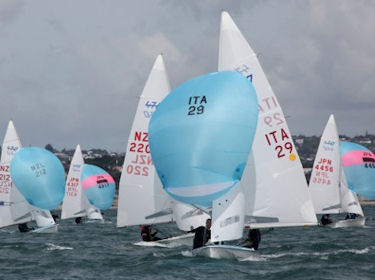 At the 2012 470 Junior World Championship, sailed out of Takapuna Boating Club on Auckland's North Shore, ten races have been completed. Simon Sivitz Kosuita/Jas Farneti of Italy continued their winning ways, and the consistency of Afrodite Kyranakou/Jeske Kisters of the Netherlands kept the women's crew just clear of their rivals.

Racing conditions returned to the prevailing breeze of this regatta. The offshore south westerly, with it's shifty and patchy gusts, is hard to read and was described as "a crazy breeze" by at least one sailor who lost 10 boats when missing a shift. The wind was 15-18 knots.

470 Men/Mixed
Sivitz Kosuta/Farneti began the day with yet another win, but it was the Netherlands crew of Dirk Bennen/Rogier Weijers who claimed line honours in race 10. This brings Bennen/Weijers up into third place on the leader board after beginning the day on sixth, while the ever consistent local lads James Turner/Finn Drummond put in a solid performance with a second and fifth placing which tightened their grip on second position. Snakes and ladders in the challenging conditions is to be expected and today was no exception in the fleet - Magnus MasilgeMoritz Klingenberger have climbed from eighth to fifth, while young Greek sailors Alexandros and George Kavvas have dropped two places in the heavier breeze.

470 Women
A run of second places has put seven points between series leaders Netherland's Afrodite Kyranakou/Jeske Kisters and new combination Annika Bochmann/Elisabeth Panuschka. Bochmann is the defending 470 Junior World Champion with her previous crew, so has plenty of experience to call on.

A first placing in race nine brought the German girls a little closer to their goal, but a drop in the second race relieved the pressure on Kyranakou/Kisters once again. Despite a DNF (did not finish) the British crew Anna Burnet/Flora Stewart remain in third, but Chika Hatae/Eri Hatayama of Japan are now within contention following a win in the second race today.

Another day with two more races remain in the series for all competitors, giving the sailors a last chance to move into the top ten placings and allow them to take part in the medal race on Friday.

Video Review after Day 5 of racing