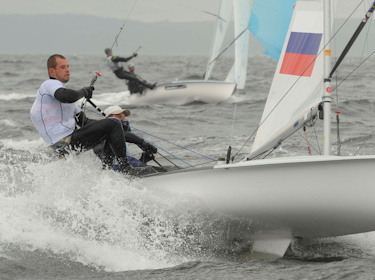 The day dawned overcast with a light rain and breeze, with racing getting underway in a shifting breeze, before the race course was overcome with rain, increased wind and then both vanished.

Up first on Race Course C, the most northern of the three course areas that can be used here in Largs, were the 470 Men sailing the outer loop of the trapezoid race course, with the women scheduled to start second and sailing the inner loop.

After a postponement waiting for the conflicting winds from the north and east to stabilise, and a general recall, 470 Men race 1 got underway in about 10 knots of breeze. The women’s fleet matched the men with a general recall for the first attempt to start race 1, before getting off cleanly, but a bit more drama for them as just two minutes into the start the race was abandoned due to the shifting wind. The women then had to wait for the men’s fleet to finish before the race course was relocated to the west, between the Isle of Bute and Cumbrae, where the wind was more stable.

A challenge for the Race Management team, as summed up by Course Race Officer Adrian Stoggall, who gave a brief statement, saying, “It was a hard and wet day in the office!” 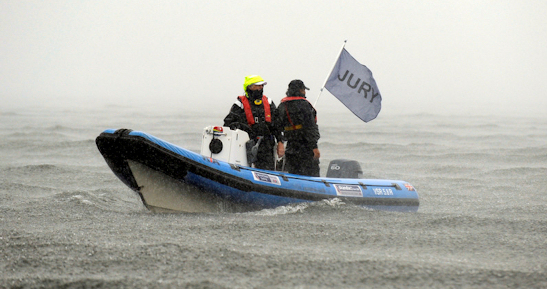 470 Men
No surprise to see Sime Fantela/Igor Marenic take the gun for race 1 of the European Championship. As the top ranked team competing in Largs, the surprise would have been if they weren’t at the front. Switzerland’s Olympic team of Yannick Brauchli/Romuald Hauuser finished in second, with Ben SAXTON/Richard MASON third.

The talent in the 470 Men’s fleet is deep, and so defence of their 2011 470 European Championship crown is by no means an easy mission for the Croatians, as was proven in race 2 with three totally different teams taking the top three places and Fantela/Marenic down in 8th. 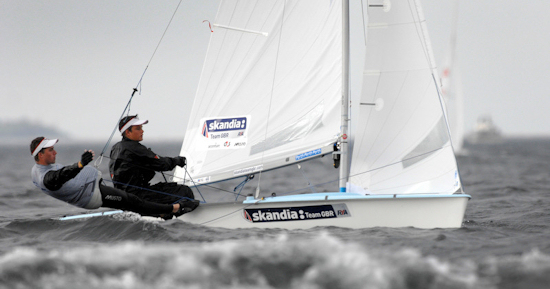 Mix these results up and the overall lead after day 1 is in the hands of Philip Sparks/David Kohler (GBR), brothers Denis and Ates Cinar from Turkey in second and Ben Saxton/Richard Mason (GBR) in third, with Fantela/Marenic in fourth.

Unsurprisingly perhaps, it was Scotland’s David Kohler, whose growing years were spent tackling conditions in this same corner of the country, and his English helm Philip Sparks, who were most consistent.

“It was very variable today, starting off with a very light breeze that gradually filled in,” said Kohler with a hint of understatement.

“Then there were some big shifts as the rain came in and there were 45 degree wind shifts. But we managed to get on the right side, more by luck than skill for some of them, and got a fourth and first."

Igor Marenic accepts the challenge ahead to defend the Championship, saying, “Of course it is not going to be easy, especially in these conditions. Today we saw that anything can happen and the key will be to keep eyes wide open and sail with the least mistakes possible.”

Turkey’s Ates Cinar was delighted with their performance, “It was a good day. The first race first start we were not good, we were in the third row, and we just tried to stay in the group. But luckily we caught a right hand shift and caught the group and managed to finish sixth. Race 2 was tricky with so many tacks in the first upwind, and the first downwind saw the arrival of the rain, with most teams gybing but we kept going and rounded first and ended up finishing second. It was a surviving day.”

Bit of a surprise to see Canada’s Olympic team of Luke Ramsay/Mike Leigh end the day in 17th overall, but Leigh was pragmatic that the day gave them space to improve, commenting, “We thought it would be quite light wind here and very tricky, which is exactly what we saw today. Light wind conditions have been our achilles’ heel since we got into the boat, so we are really working hard to get up to speed in those areas so it is great practice for that. You never know what might happen in Weymouth and if you can sail in the conditions we had today, you can sail in anything. So we will debrief from today, try and figure out how to push forward and keep getting better.”

470 Women
When race 1 did eventually get underway around 1420 hours in the new course location, and after a big wind shift to the right forced the postponement flag back up, the 470 Women fleet could certainly be credited with patience!

Unfortunately the patience did not continue for Diane Kissane/Saskia Tidey and Maelenn Lemaître/Aloise Retornaz (FRA) who were over the line at the start of race 1 and score OCS – not an ideal way to start a European Championship.

Back at the head of the fleet Alisa Kirilyuk/Lyudmila Dmitrieva (RUS) took an lead early with Amy Seabright/Eilidh Mcintyre (GBR) chasing in a building breeze of 14 knots as they went up to the windward mark. But as the race unfolded, these leading two teams couldn’t fend off the pressure from the rest of the pack, with the opening race win going to Annika Bochmann/Elisabeth Panuschka (GER), Sophie Weguelin/Sophie Ainsworth (GBR) in second and Slovenia’s Olympic team of Tina Mrak/Teja Cerne in third. 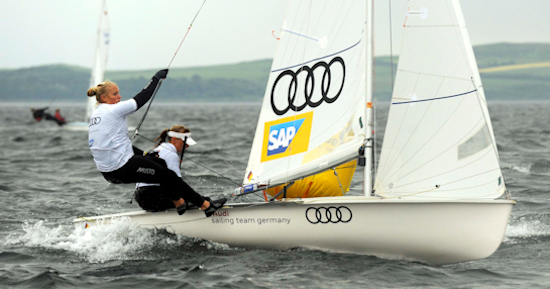 Before race 1 had finished, the Race Committee made a perfect assessment of the ongoing mixed up racing conditions, abandoned racing for the day and sent the 470 Women fleet back to shore at around 1530 hours.

Bochmann reflected on the day’s waiting game, “We waited about three hours for racing and we just didn’t know when or where the wind would come from,” with Panuschka adding, “The wind directions were changing so quickly and it was so hard to make a proper course.”

Bochmann continued, “On the second upwind of the outer loop the rain came and we just tried to look for some ribs to work out where the marks were. We then got a nice shift, which initially we thought was more pressure, but it was also more rain, and we managed to cross the finish with about a 30 metre margin.”

A rather bedraggled Sophie Ainsworth gave her conclusion their day of “snakes and ladders”, commenting, “We had our ups and downs and we quite enjoyed the torrential rain half way through where you couldn’t see a thing and the boat was just filling up! You could see the ribs just before you lost sight of everything and then you just had to remember how long you had been on each tack .”

Helm Sophie Weguelin added, “It was a nightmare and you could just about see the boats around you,” before grinning, “but it was all good fun!”

Tina Mrak/Teja Cerne will be representing Slovenia at the Olympics next month and end the day in third. “It was a tough race and until the finish you had to concentrate. We had all kinds of winds – the race started with 20 knots and finished with almost no wind. And having strong rain during the race was difficult,” said Cerne.

Reflecting on the weather Croatia’s Romana Zupan said, “This is kind of something we have done for the first time as we don’t get this kind of weather at home. It is fun in a way, as despite going crazy because you can’t see anything, it is a good experience. It was a tough day and tough sailing, and we did the best we could, so sixth is not bad when you consider what happened on the water.” Zupan will compete with helm Enia Nincevic at the Olympics.