Day six of the Delta Lloyd Junior 470 World Championships in Holland and for the first time in a while the sunshine smiled on the 92 teams from around the world. 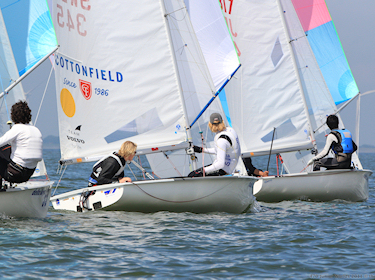 However, not much sign of the wind returning, as the competitors endured another day of impossibly light and patchy breezes which meant almost everyone suffered at least one bad race out of the three completed. This has been a regatta of two halves, after an excess of breeze in the early stages followed by a lack of breeze over the past few days.

Series leaders in the Girls division, Annika Bochmann and Anika Lorenz from Germany, picked up two shocking scores with a 20, 23 but at least made amends in the last heat with a 2nd. Fortunately for them, none of their closest rivals had a particularly great day either, and last year’s Junior silver medallists have a 14 point cushion between them and the Australians in second overall, Sasha Ryan and Chelsea Hall.

Lorenz commented: “We were unlucky in the first race as we decided to go to the wrong side and there was not enough wind to catch up during the rest of the race. In the second race when the wind died completely we didn’t know what to do: whether we should laugh or cry. We were expecting the race committee to cancel the race. For the third race, the wind was very stable, they were fair conditions, and in this kind of conditions you can sail three races with no problem. 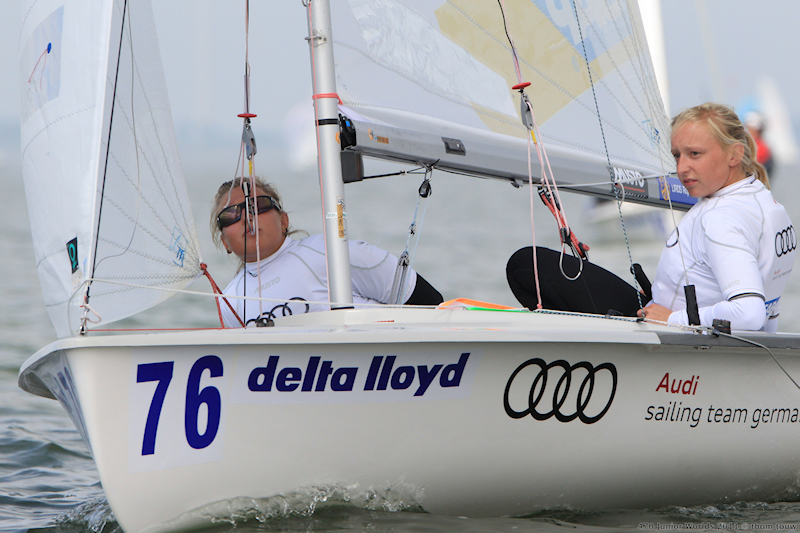 “For tomorrow we go into the medal race in first place, and we hope that the second and third girls that are very close will start to fight against each other and we can sail clear of the others. The forecast says that there will be very good racing conditions and we hope we’ll do a good race.”

As Lorenz pointed out, the Australians will have to keep a close eye on the British team, Anna Burnet and Flora Stewart, whose scores of 1,21,12 from today’s races bring them to within 2 points of silver. Two other British teams lie in 4th and 5th overall, waiting to pounce on any errors that could launch them on to the podium.

Leaders in the Mens/Mixed division, Nicklas Dackhammar and Fredrik Bergstrom, had a so-so day with scores of 6,8,9. However, the Swedes are the only crew to have kept all their scores inside the top 10. They hold  an eight-point advantage over the French team of Kevin Peponnet and Julien Lebrun, who made more sense than most of the crazy conditions, with a very impressive 1,13,2 from today.

The Greek team in 3rd overall, Vasileios Papoutsoglou and John Orfanos, also did well today with 9,1,14 - although the final result could have been a lot better as Papoutsoglou explained: “In the last race on the last downwind, we lost six places as we were sailing on port and there was another boat coming on starboard and we tried to avoid contact but he went head to wind and he hit us. We made a 720 penalty because we didn’t wanted to risk it and we have launched a protest and we’ll wait to see what the jury will decide.” In the end the protest was dismissed.

Dackhammar was relieved to have come away from the day fairly unscathed, although he was kicking himself for an error early in the first race. “We were second at the first mark but then we gybed away and we ended up losing a lot of places,” he said. “We didn’t fully have it together for today.” Still, the job is nearly done. “Tomorrow it’s the medal race and for us it’s gold or silver. We will just try to keep the French guys behind us.”

The French have a lot to do if they’re to win this Championship tomorrow. An eight-point gap to the leaders means four places in a double-counting Medal Race. A tall order with just 10 boats in the race, although Kevin Peponnet is still looking forward to gold, rather than settling for silver or bronze. “For tomorrow we don’t have so many points behind the first place, so I think we will go over him and try to win the race, as it’s still possible to get the gold for us. Tomorrow we will fight against the Swedish and then the Greeks. It will be hard to pass them but we won’t give up easily.”

In the Silver fleet, Japanese team Ryo Imamura and Yusuke Ishii tumbled from the lead after a bad day that included a black flag disqualification. No such errors from the Slovenians Andraž Gulia and Jakob Bozic, whose scores of 2,3,4 put them a comfortable 19 points ahead of second-placed German team, Patrik Drees and Max Schuemann.

On site in Medemblik is four-time America's Cup winner Murray Jones, supporting his son Matthew who is sailing with James Turner. A past 470 sailor as well, Jones senior gives his thoughts on the 470:

The Championship concludes tomorrow with a final fleet race for the majority of the competitors, and reaches a climax with the Medal Races for the top 10 in the Men’s and Women’s divisions.

Note to Editors:
The Organizing Committee kindly asks publishers of printed media to send a PDF of the published article to: info@470juniorworlds2011.org

Video Footage:
On 27 and 28 July video footage of racing in B Roll for broadcasting stations will be available. For login details, email: info@470juniorworlds2011.org