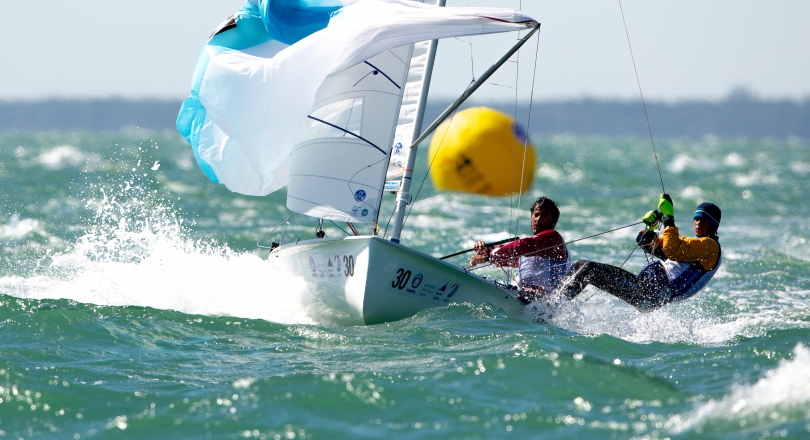 SAILORS RISE TO THE OCCASION IN UNEXPECTED MIAMI CONDITIONS

The 182 sailors embraced the challenge of the uncharacteristically cold and blustery conditions in Biscayne Bay on Day 3 of the 2020 Hempel World Cup Series Miami.

The athletes were faced with similar conditions on Tuesday, but Wednesday's overall shifty conditions and wind chill presented an even greater test of their physical and tactical skills.

Heading into Wednesday's racing the Men's and Women's 470 had completed four races over two days. Wednesday morning's conditions forced some short postponements for the Men's 470 classes.

World Cup Miami is the final opportunity for North American nations to qualify for the Tokyo 2020 Olympic Games across the 470 fleets.

The race for Olympic qualification for the Men's 470 in North America is between Canada and Mexico, who have three teams respectively.

Luke Ramsay and Hunter Lowden of Canada are one of the teams vying for position and they are currently ahead of their Olympic qualification competitors with two days of fleet racing remaining this week.

"We were seeing 22 to 26 knots and it was really steep with choppy waves, which made it really hard to keep the boat rumbling all the time," said Ramsey. "All of the top guys in the top 20 are here so it's a really good gauge to see where you're at. We've been going well at times, but our losses seem to come in the really tricky spots."

Ramsey and Lowden know what is at stake and have their eyes on teams from Mexico, especially. "When it's windy you don't really have a lot of influence on other boats. We've tried to sail our own track. When it gets a bit lighter that might change, and you've got to keep a closer eye on them and see where they're going and what's happening. Today was just trying to keep the boat fast, do the right thing and not focus on everybody else."

Moving into first place in the Men's 470 class today was the Mat Belcher and Will Ryan of Australia, who placed third in Race 6 and won Race 5. Dropping into second place was Anton Dahlberg and Fredrik Bergstrom of Sweden.

Panagiotis Mantis and Pavlos Kagialis of Greece are in third place and six points behind the leaders.

"It was very difficult to manage and stay in the same position," said Mantis. "We had one good race and one bad. We've got two more days before the Medal Race. It was very cold in the morning and it's a bit of a shock for us. Everyone was expecting something a little bit warmer. There have been some very good moments so far this week but there have been some bad. We're happy with our performance."

Women's 470 Tokyo 2020 medal favourites Camille Lecointre and Aloise Retornaz (FRA) hold the initiative in their 16-boat fleet. A race win and a fifth from Wednesday's action has given them a eight point advantage over Poland's Agnieszka Skrzypulec and Jolanta Ogar. The day's other race win went the way of Tina Mrak and Veronika Macarol of Slovenia who are third overall.

The USA will confirm a spot in the Women's 470 fleet at Tokyo 2020 this week and the event acts as a team qualifier. Twin sisters Carmen and Emma Cowles hold an initiative with four fleet races remaining.