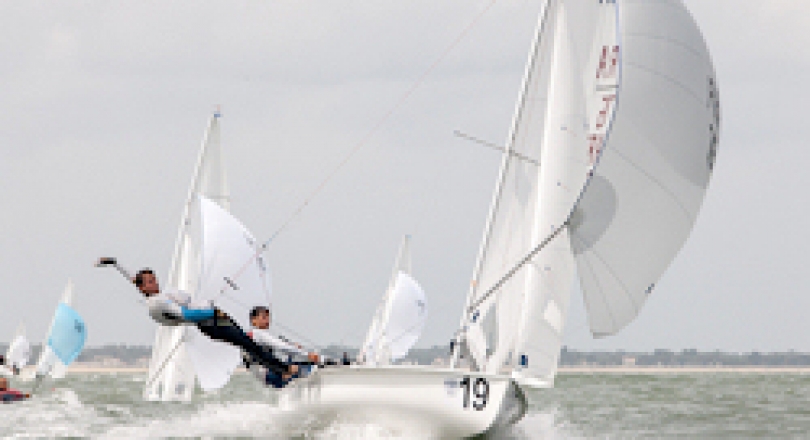 There was no gentle introduction to the opening events at the International 470 Class 50th Anniversary celebrations in La Rochelle today, with a blustery and building breeze greeting teams on the race courses.

The 2013 470 Junior World Championships, Masters’ Cup and Open Classic have launched the 50th Anniversary Celebrations for the International 470 Class in La Rochelle, France, showcasing the youngest 470 sailors through to the more senior connoisseurs of 470 sailing.

Averaging 14 knots, with 17 knot puffs many of the younger teams relished the conditions, but the same could not entirely be said for some of the teams in the Grand-grandmasters division, where the combined age of the crew must be at least 120 years.

Last night’s Opening Ceremony was all about the generations of 470 sailors from the most recent newcomers to the fleet, through to the distinguished grand-grandmasters competing in the Masters’ Cup. The younger club members of La Société des Régates Rochelaises greeted the teams from around the world by saying "hello" in the language of the competing nations.

Racing got underway today soon after 1300 hours with 2 races held for each fleet.

470 Junior Worlds Men
Making their debut appearance in the ranks of the 470 Junior World Championships are all three medallists from the 2012 420 World Championship; brothers Alex and George Kavas (GRE), Guillaume Pirouelle/Valentin Sipan (FRA) and David Charles/Alex Charles (ESP), who are facing off against some of the top teams who have been contesting the junior fleet over the past few years.

Pirouelle and Sipan have been training in La Rochelle for about 3 weeks, and their efforts showed with a race win and a 2nd place in the blue fleet placing them at the front of the men’s leaderboard. They almost won the second race too, but lost their lead just at the end of the last downwind. The pair have been sailing the 470 for one year and raced the 470 Europeans in Italy last month, finishing 35th in the senior fleet. “It was exciting to go on the water today,” said Pirouelle, “and to get a first and second was great.”

The opening race win in the yellow fleet today went to Pierre Quiroga/Clement Pequin, which they followed up with a third to lie in second overall. Italy’s Matteo Capurro/Matteo Puppo are in third.

South Africa’s new pairing of Asenathi Jim/Sibu Sizatu showed excellent form posting a 3,5 to end day 1 in 7th on the leaderboard, but Jim was not happy. “We are learning a lot, but I made a lot of mistakes today and there is lot I am missing.” 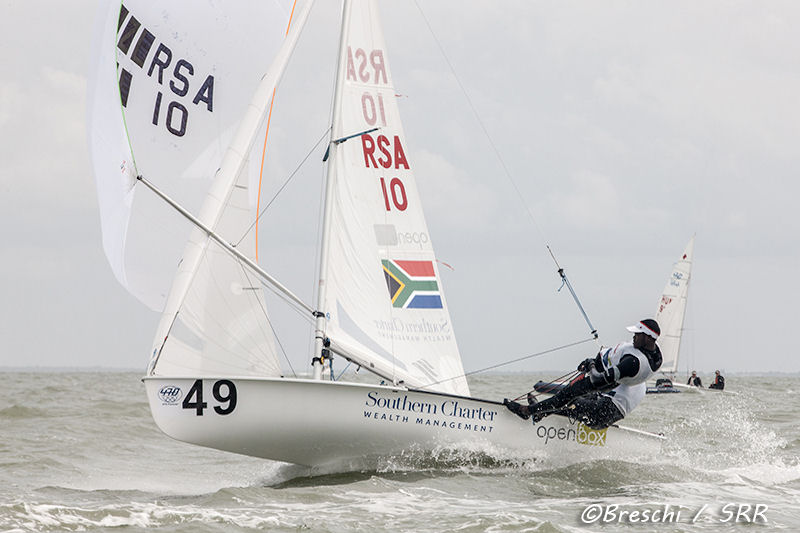 Jim and his usual crew Roger Hudson have been the face of South African 470 sailing for the past few years, representing South Africa at the 2012 Olympic Games in Weymouth. For the 470 Junior Worlds, Hudson is in the coach boat. “There is a lot to improve and a lot I am missing from Roger, but we are working hard to fill the link and cut off the mistakes,” continued Jim. “Today was a nice opener, but I know what went wrong and it is the small things which make a big difference at the end. In the starting we just didn’t shoot up as I was nervous getting caught over, so I held back in both races, which was a bit of a disaster.”

Back home in South Africa, there is a major programme taking place to prepare the next generation of 470 talent and Jim’s crew Sibu Sizatu is one of the young stars. Having committed to the RaceAhead 470 training squad in September 2012 Sizatu has completed numerous training sessions which rewarded him with selection to partner with Jim at the Junior Worlds. Jim and Hudson will return to their usual combination to race in the 470 World Championships which start on 5 August.

“We had really good speed today and a very good feeling in our new boat,” said Retornaz. “It is very special to see so many people here and we want to do our best.”

In the first race, a great start and excellent boat speed combined to propel them round the track from start to finish with the pair pumping hard. The pair put one of the classic 470s which are here in La Rochelle through it's paces, with Lemaitre explaining, “For three days we sailed an old 470 and it wasn’t so different, but now we do have a lot of new things in the boat.” 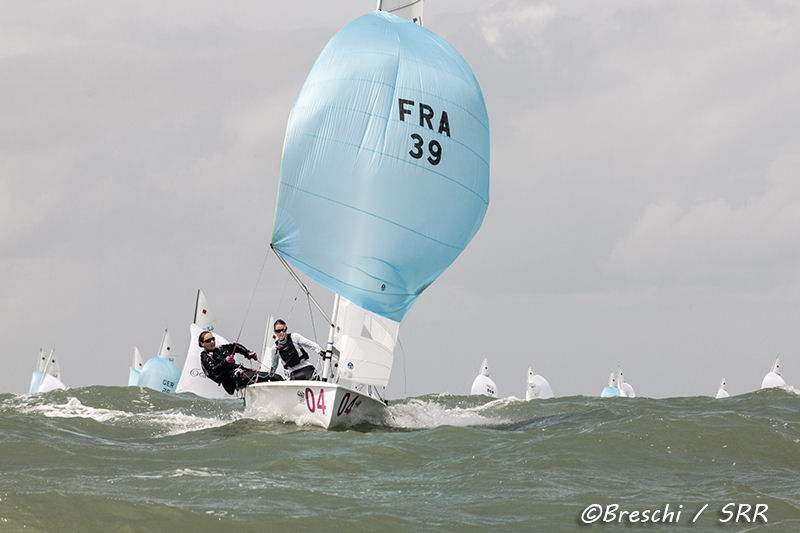 Joanna Freeman/Katie Tomsett from Great Britain are in second and Germany’s Greta Markfort/Anna Markfort in 3rd.

Anna Kyselova/Anastasiya Krasko from the Ukraine are one of the teams racing back to back, with the Junior Worlds being followed by the 470 Worlds. First day and they are happy with their fourth on the leaderboard. “The first race was not really good for us as we thought we had started early, so went back, and then we finished 10th,” said Kyselova, “but in race 2, despite a bad start we fought back to finish 2nd.“

470 Masters' Cup and Open Classic
A record breaking 91 teams are competing in the 470 Masters’ Cup, racing in divisions based on age, from the youngest Apprentice Masters through to the Grand-grandmasters, whose combined age must be more than one hundred and twenty years before the end of the year. 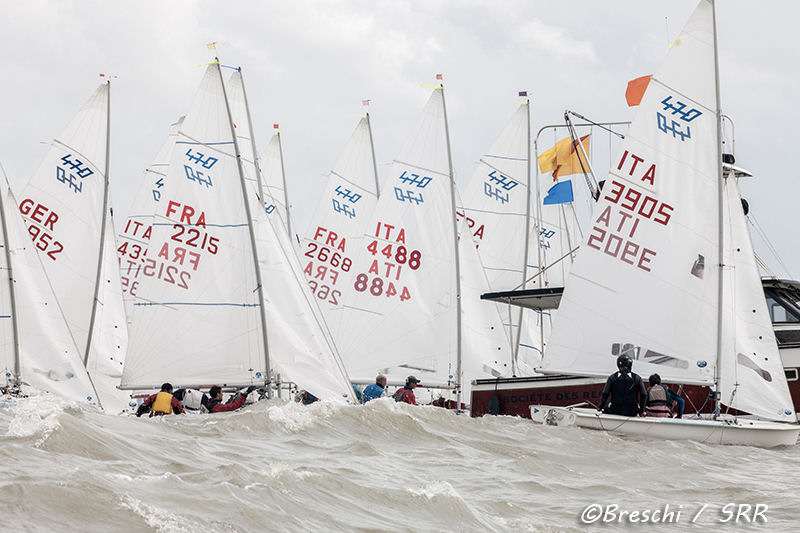 In the Apprentice Masters division, where at one of the crew must be 30 years old during 2013 and the combined age more than 60 years, the brother and sister team of Iulia Fulicea and Paul Negoescu from Romania claimed a clean sweep to win both races. Raphael Duchoud/Nicolas Duchoud (SUI) are in second and Ott Rene/Christian Sprecher (SUI) in third.

Moving up a division to the Masters’ fleet and a double-race win puts Italy’s Fernando Zicarelli/Davide Gamba in first overall, with Stefan Seger/Benjamin Wagner (SUI) in second and Ivica Bonacin/Federioc Zampolini (ITA) in third.

Onto the Grandmasters, and defending champion Bernard Boime/Gilles Espinannes made a strong start to their defence with a 2,1 scoreline and are in first on equal points with the second placed Francois Brenac/Jacques Dirusso. Germany’s Joachim Oetken/Stafan Oetken are in third.

Onto the connoisseurs of the Masters’ fleet, the Grand-grandmasters, where Robert Maurel/Gerard Daugey (FRA) also claimed two bullets to lead, with Marc Besson/Pierre Denis (FRA) in second and the reigning champions Martin Steiger/Hans Vonmoos from Switzerland in third from a 2,3 scoreline in today’s breezy conditions.

About the 470 Class 50th Anniversary Celebrations
Over the next two weeks, from 29 July to 10 August, there will be back to back racing in La Rochelle to celebrate the past, current and future generations of 470 sailors and sailing. Organized in collaboration between the International 470 Class Association, Société des Régates Rochelaises, AS470 France and the Federation Francaise de Voile get ready for two weeks of thrilling racing, a concourse d'elegance of some of the earliest built 470s, the launch of the 470 Great Book, Legends' Trophy, 50 Year Cup, Gala Dinner and much more - wrapping up on 10 August with the Closing Ceremony for the 2013 470 World Championships.