The final series for the 470 Men and Women got underway today off Thessaloniki, Greece with two races for each of the gold and silver fleets. 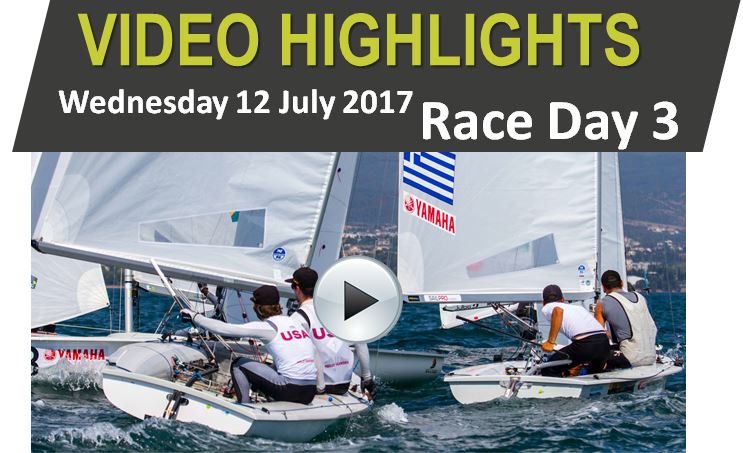 Lighter breeze meant lots of bunching around the marks. Get it wrong and it was a focus to get back into rhythm with the ever present attack.

No let-up in the performance of Anton Dahlberg/Fredrik Bergstrom (SWE) who hold tight to the 470 Men lead, racking up a 2,3. A matching scorecard from the new series leaders in the 470 Women, Agnieszka Skrzypulec/Irmina Mrozek (POL), propels them to the front.

Reflective of the transition amongst teams in the opening year of campaigning to Tokyo 2020, the top ten is not the usual leader board hierarchy.  Interestingly, both leading teams, the Swedish and Polish, have taken time away from the race track and appear to have returned fresh and with a renewed impetus.

470 WOMEN
Agnieszka Skrzypulec/Irmina Mrozek have delivered the most consistent scorecard across the women’s fleet, with no result lower than third. Today’s 2,3 performance propels them up to first overall, with Hannah Mills/Eilidh McIntyre (GBR) and Slovenia’s Tina Mrak/Veronika Macarol dropping to 2nd and 3rd.

“I didn’t expect this, as we had quite a bad regatta before the Worlds,” Skrzypulec explained on their performance at the warm-up event.”

Earlier this year, as Mrozek recovered from injury, Skrzypulec competed with Jola Ogar as a temporary crew, and the 470 Worlds marks the team’s return to elite competition.

“So, I have a lot of respect for the fleet. From last week, I knew that we had to control the fleet, stay focused and relaxed and realised that we would fight for each place during the whole race. We don’t have to win the first beat, we just have to be very good at the finishing line.

“We sit in a very comfortable position, and I am relaxed. The others might get a bit nervous, but not me, and that is an advantage.

“But I don’t get too excited. I think that we sailed smart and our speed was good, so we are fighting each place in every race and finally we got such good results. I am very happy for that, but I know there is still a long way to go and a medal race, so we have to stay focused, relaxed and do what we are doing now," Skrzypulec concluded on the challenge ahead.

China’s Xiaoli Wang/Haiyang Gao sit just 1 point off third.  Two-time Olympian Wang partnered up with Gao after Rio 2016, and they are coached by the vastly experienced Romain Bonnaud, who has been working with the Chinese 470 squad for several years.

“They have been working pretty hard during the last couple of months,” reflected Bonnaud. “That is the conditions how we like to work, and they have been sailing pretty well. We don’t feel any pressure here and we just want to enjoy every race. So far so good."

An incredible passage of play from Switzerland’s Linda Fahrni/Maja Siegenthaler rewarded them with two wins and an escalation up the leaderboard to 5th.

"In the second race we had a really good start, went to the left and could cross all the boats and led from the first mark.I feel really good. We had breakfast in a different restaurant this mornng, and perhaps that helped us," laughed Siegenthaler.

“Today was tough, very close racing,” explained Dahlberg. “In the first race we just managed to get to the windward mark at the right moment so it came quite easy. Second race we fought the whole way around,“ he added on the battle between the Australians, Austrians and Thai teams.

“Today people thought it was going to be more one track, but it was a lot more open. You had to do the big things right and really maximise the small details.”

Thailand’s Navee Thamsoontorn/Nut Butmarasri managed the competition skilfully to seize a 4th place finish in race 7, just behind the Swedes.

Third placed Bargehr/Mähr have certainly stepped up their game at the Worlds, as they achieve a career best position.

“It was pretty tough racing in the lighter breeze, and at the marks and gates the whole pack was there and you could easily win or lose ten or fifteen places,” remarked Bargehr on converting a 10th place position to a 25th place position after some mark rounding. “It was a little bit like the wild west at the marks, but otherwise good.”