Perth 2011 is planning a memorable start for the World Championships with a "Parade of Sail" that will showcase the supporting yacht clubs and the historic Swan River link between the capital city of Perth and its port city of Fremantle. 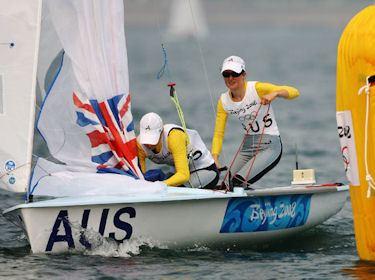 With the Perth 2011 Opening Ceremony taking place in Forrest Place on the afternoon of Friday 2 December, the ISAF flag will be carried along the Swan River by a variety of sailing craft reflecting the history and culture of each of the seven sailing clubs involved.

This spectacular relay will feature boats as diverse as the traditional H28 to the Formula One of skiff sailing, the Sydney Harbour 18 footer. At Fremantle, the flag will be brought ashore at Bathers Bay by the current world champions in the Men’s and Women’s RS:X, Piotr Myszka (POL) and Blanca Manchon (ESP). They will hand it over to 2008 Olympic Games gold medallist in the Women’s 470, Elise Rechichi (AUS), who will carry it across the beach to the Fremantle Roundhouse to be hoisted as the sun sets over the Indian Ocean.

Elise has recently paired up with Belinda Stowell, who won a gold medal in the 470 women in 2000 and also represented Australia at the 2004 Olympics. So far the pair have competed in two events together and have demonstrated a chemistry to deliver results. Their first event, Sail Melbourne, they won and followed up with a 17th place at the 2012 Australian 470 National Championships held in Fremantle last week. Their Olympic campaign is looking sweet so far.