A patient morning was in order for the first race day of the 2012 470 World Championships to get underway as the sailors were kept postponed ashore waiting for wind. From early on, it was evident the scheduled start of 1200 hours was never going to happen. 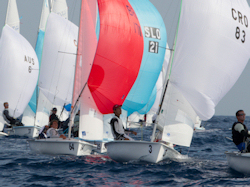 The conditions were really tricky, shifty and light winds of around 6 knots, and pressure moving all over the course, with only one race completed for all fleets.

470 Women
It was a French show of prowess today, with the recently selected French Olympic team of Camille Lecointre/Mathilde Geron (FRA) taking the win in the blue fleet, with Ingrid Petitjean/Nadege Douroux (FRA) delivering the same in the yellow fleet.

Petijean summarized their race, “We had a good start and were leading the first half of the first leg, but we were 3rd at the first mark. So then we didn’t take any risks, because 3rd in the opening race is good enough. We had some good speed on the last downwind and got to first at the finish. The first race is like any race, but we are not the kind to start a series well, as normally we start average and build, so we are happy to win. The goal now is to sail as well for the rest of the regatta.” 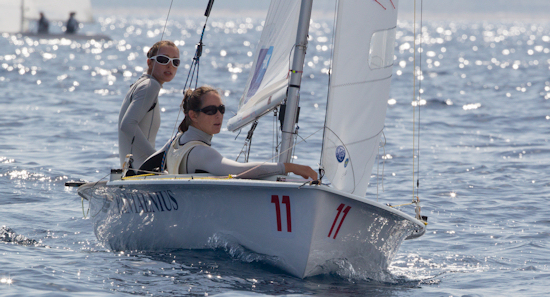 The two Canadian 470 Women teams competing both have the same mission, qualify Canada to the Olympic Games and secure team be selected as the team. Between them, it was advantage Dana Archibald/Karen Dexter with a 9th place finish in the yellow fleet, over Hannah Meers/Erin Flanagan with a 20th in the blue fleet. Archibald explained,

“Basically we are trying to keep it simple, good start, stay clean and not get psyched out by the whole thing. There is a lot of pressure on a lot of teams and we are trying to use support from home for encouragement, rather than letting the pressure get in our heads and mess up our game plan.”

With 2004 Olympic Gold medallist Kevin Burnham (USA) coaching the pair over the past few months, their performance is improving, as Archibald explained, “Yeh, Kevin has been the key role for us lately. We just started working with him for Palma and Hyeres. We struggled with speed previously and that has definitely been the biggest gain and now being able to go as fast as the other boats, we have been able to put other things into play such as tactics, which have been different for us beforehand.”

A perfect comeback was executed by the Brazilian team of Fernanda Oliveira/Ana Barbachan who clawed their way up from the back of the fleet to cross in 10th, as Oliveira explained, “We had a good start but the first leg, the wind changed a lot so it was shifting and we made some mistakes and then we were at the back of the fleet. But we recovered and improved. It was really hard. Tomorrow is another day.”

Whilst relishing the light conditions, the Danish pair of Henriette Koch/Lene Sommer, who narrowly missed out on nation qualification at the Perth 2011 ISAF Sailing World Championships, did not have the best start to their series, taking a penalty turn after touching the stern of the Singaporean boat around a mark to end their race in 14th. Koch said, “It reminded me of the film ‘Fast and Furious’, we were trying to get through, but the boat in front just stopped!” 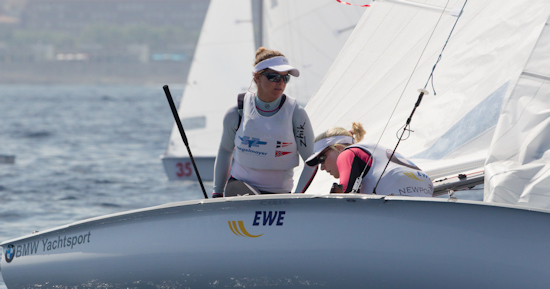 470 Men
The 470 Men yellow fleet got underway first, following by the blue fleet and red, with each completing one race.

Racing in the yellow fleet, and gunning for Olympic selection are Panagiotis Mantis/Pavlos Kagialis (GRE). They successfully qualified Greece to the Olympic Games last year, but the 2012 470 Worlds will be the ultimate decider as to which Greek 470 team takes the nation slot. Mantis/Kagialis are the #2 world ranked team, and are facing off against the #7 world ranked team of Panagiotis Kambouridis/Efstathios Papadopoulos. A hard pill to swallow, despite both being amongst the top ten teams in the world, only the team that finishes ahead in Barcelona will go to the Olympics.

Kagialis commented, “It was a very good day, pretty light winds. We had a bad start, but we gave it our best because we must and we finished 2nd. It was a nice start to the Championship and we must keep going and see what happens. It was pretty light winds, a lot of good boats with good speed and it was very difficult today.” Their adversaries finished 8th overall in the red fleet, but there is a long way to go yet and another 11 races scheduled before Saturday’s Medal Race.

Not surprisingly, Mat Belcher/Malcolm Page (AUS) delivered a race win in the yellow fleet, as did Pierre Leboucher/Vincent Garos (FRA) in the blue fleet, and Sofian Bouvet/Vincent Guillarm (FRA) in the red fleet. 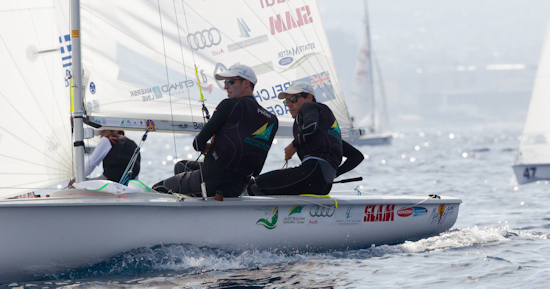 Belcher/Page are going for three World Championship victories in a row, as Page explained, “It's amazing to be in a position to be going for our hat trick. A World Championship is always the most important regatta for us in any year... except in this Olympic year, for obvious reasons. So with this in mind we are just concentrating on our preparation towards the games and using every event to hone our skills and measure against the best 470 sailors in the world. We are obviously very happy with our preparations and seem to be on a roll at the moment, but 470 sailors are very good, the competition is very fierce across so many nations that you can never expect any certain results.”

Chile is fielding two teams, Martin Westcott/Carlos Vergara and Benjamin Grez/Diego Gonzalez. For Diego Gonzalez, the two teams benefit each other, “It is great to have another boat to train with before the Worlds, and it is also nice to see that Chile is represented here and that we have several 470s in Chile.” Speaking on the racing, he continued, “It as was a pretty light day and difficult. We didn’t have a good start, so couldn’t get to the favoured side of the course, but we worked our way back up during the race and finally finished top 20. It wasn’t a good race and we know we can do better, but it is not a bad place either.”

In the men’s blue fleet, great to see Korea’s Gunwoo Park/Sungmin Cho lead off after a great start and continue in front to the first mark, going onto record a 10th overall. 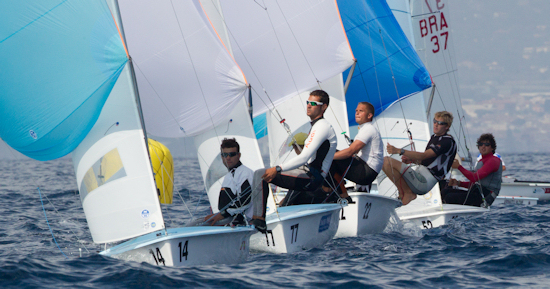 Racing is scheduled to get underway at 1200 hours tomorrow, with the same fleet allocations as today. The 470 Women will race on course area alpha and the 470 men on course area bravo. The Race Committee is aiming to hold three races for each fleet, which they are hopeful of achieving as the sea breeze of 9-12 knots should be in around 1300 hours and building from thereon.