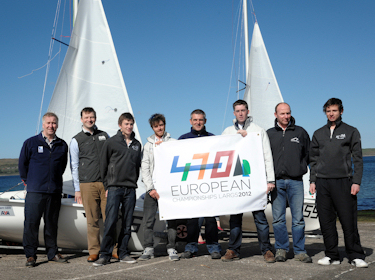 The Helensburgh 24 year old was back at his Clyde sailing roots today, lending his support to the launch of the 470 European Championships which brings many of the world’s top sailors to Largs this summer (25 June – 4 July 2012).

It was these Largs waters that helped hone the racing skills of a young Patience who, with team mate Stuart Bithell, won the silver medal in December’s World Championships.

The same testing Scottish west coast environment is helping to forge the careers of a strong group of Scottish youngsters. Three of them, who have come through the same RYA Scotland training programme that supported Patience, were at Largs to meet the man they hope to emulate in future Olympics.

Edinburgh 20 year old, David Kohler, races in the 470 class and on completion of university this summer will embark on a full time career, starting with the European Championships. Weststruther 16 year old Calum Airlie, who will carry the Olympic Flame in the Torch Relay in June, is on the RYA Scotland National Squad and is a member of the GB programme. Older brother, Drew Airlie (18) has also come through RYA Scotland’s programme.

“We have a good crop of youngsters in Scotland who have achieved some great results,” said Patience. “Clearly they have the drive and support to allow them to get these results and succeed.

“My message to them is to dream big and push hard because we are not here forever and this is a cool journey to be on. “

Patience is delighted to be in the Olympic team but his ambitions extend further still. So focussed is he on winning the gold medal this summer that his every waking second is directed to the cause.

“I'm so driven right now that I wake up in the morning and the first thing I think of is standing on the podium with a gold medal,” he said.

“It drags me out of bed, it takes me to the gym, it makes me do all the hard work. And that hard work is enjoyable; I genuinely love the hard work and I want to get to the start line in race one at the Olympics and be able to say that I worked harder than everyone else around me and I deserve this more than anyone.

“I'll be dammed if I've worked this hard to lose a gold to a silver - that would be totally unfinished business. I'm dreaming big and I intend to seal that deal.”

Scottish sports fans that don’t get as far as Weymouth or Portland to watch this summer’s Olympics will, in the European Championships, get to see the bulk of the Olympic 470 fleet competing on home waters. At Largs over 100 top crews are expected to compete as a last opportunity to fine-tune their racing before the Olympic regatta.

Hosting the European Championships also provides a great opportunity for Scottish sailing officials to get involved in a world class event. Some 100 volunteers are expected to be supporting the event, some of whom will move on to volunteer roles at the 2012 Olympic Sailing Competition.

And a large contingent of Scots, from sportscotland’s national centre at Cumbrae and the Scottish Sailing Institute hold high profile race management positions at the Games.

The benefits of Scotland hosting the 470 European Championships extend further still, in particular they make a significant impact on the Scottish economy; the 2010 Laser Radial World Championships at Largs contributed £980,000 to North Ayrshire’s economy, and more still to Scotland’s.

“These major events are great to watch and will hopefully spur on some of the youth to achieve their own goals in the sport,” added Patience.

“I remember as a youngster racing in my first national championships in Largs. It would have been inspiring just to watch it without even racing, but the Europeans bring things to another level.”

Esther Nicholls, Head of Major Events for UK Sport, the nation’s high performance sports agency, said, “The 470 European Championships in Largs will be the final event to take place within our National Lottery funded World Class Events Programme prior to the London 2012 Games. Over the five years between 2007 and 2012, we have backed 11 events in Scotland, including five World Championships, attracting more than 180,000 spectators and generating an estimated £9.8 million in economic impact for the country, as well as fantastic opportunities to prepare for Glasgow 2014.”