Race day 3 at the 2012 470 World Championships was a tense and enthralling day. Seven nations secured their right to be at the 2012 Olympic Games in the 470 Men, whilst six nations in the 470 Women continue to fight their way for the remaining five nation places. 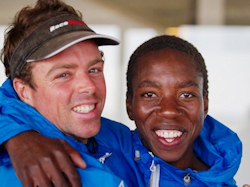 Another blue sky day in Barcelona, with all fleets completing two more races and determining the teams proceeding through to the 470 Men gold, silver and bronze fleets and the 470 Women gold and silver fleets. The breeze was not quite as strong as forecast, around 10 knots and shifty.

470 Women
After 6 races of qualification series, the gold and silver fleet splits are now determined, with 27 boats allocated to each fleet for the next stage of the 2012 470 World Championship.

Coming ashore after race 6, the air was tense as teams waited to find out who had qualified through to the gold fleet and place themselves one step closer towards their World Championship aims and Olympic qualification. The story has unfolded in the most dramatic way possible.

With only five Olympic qualification places available at the 2012 470 Worlds, six unqualified nations have made it through to the gold fleet and will now battle for the slots – so this adventure continues. There are seven more races of the final series to go and this story is a long way from over yet … as teams from Austria, China, Croatia, Denmark, Poland and Russia go head to head.

If Croatia’s Enia Nincevic/Romana Zupan achieve their goal, it will make the first time Croatia has qualified to the women’s two-person dinghy event. The pair were really disappointed not to secure Olympic qualification in Perth. “It has been a very emotional day. We are feeling great and we hope that we will continue sailing like this. We worked really hard for this, and I think that we managed to correct things that were not good before and we are not afraid of anything that might come our way. We are now second among the nations that are trying to qualify for the Olympics and we hope that the ones behind us will remain there,” Zupan said and laughed.

By a two point margin, Lara Vadlau/Eva-Maria Schimak are the last of the six teams to make it through to the gold fleet. Alongside her gold medal at last year’s ISAF Youth Worlds, Vadlau also won gold in the one-person dinghy event at the inaugural Olympic Youth Games in 2010. A relieved Vadlau said, “The first moment when we came ashore we were down as we thought it was over, but then I saw my father dancing and I realised that we were still in and have a chance. I hope we can stay in this game as we have sailed well over the last three days. ”

Denmark’s Henriette Koch/Lene Sommer have accelerated their chance of Olympic qualification and are the top placed nation within the gold fleet after a solid 5,2 scoreline today. Koch said, “We are feeling really good. It has been a tough day, but we remain focused on one race at a time.” Sommer added, “I think it is nice to have a good race, we are sailing well and feel in control.”

At the front of the 470 Women leaderboard are Camile Lecointre/Matilde Geron on 12 points, with team mates Ingrid Petitjean/Nadege Douroux one point behind in second. Despite last night's bicycle injury, birthday girl Jo Aleh of New Zealand and crew Olivia Powrie still managed to notch up a race win and fourth place to end the qualification series in third overall. “I think it all merges together a bit,” Aleh laughed, referring to her injury, birthday and race win. “I gave myself an early birthday present last night by doing a face plant flip off my bike and decided to grate up my face on the concrete. I spent six hours at Barcelona hospital, which was hard after such a big day on the water yesterday. So yes today, I thought we had to win a race because it was my birthday. It was tricky out there. The wind didn’t do what anyone thought it was going to do and shifted around a lot.”

Twenty one nations are represented in the twenty-seven teams in the gold fleet, clear evidence of the broad talent pool.

470 Men
Just 6 races have been sufficient to deliver the final seven nations who have qualified to be on the start line at the 2012 470 Olympic Sailing Competition. It was neck and neck going into today’s two races, with everything to lose with any slip ups. The team having the day of their lives was Chile’s Benjamin Grez/Diego Gonzalez who went into today in 42nd overall and 10 places off the gold fleet cut. Some superb racing rewarded them with two top five finishes and nation qualification – a good day in the office for this pair, which will see Chile making their first Olympic appearance in the 470 since 1984.

The highest placed team to secure nation qualification were Korea’s Gunwoo Park/Sungmim Cho who ended the qualification series in 14th overall. A thrilled Park said after racing, “The wind was lighter than we expected, but our speed wasn’t too bad and we chose the right side of the course, so we had a good race. This is my first time to be at the Olympic Games. I am so proud and happy to be able to represent Korea.”

On the leaderboard, South Africa was the final of the seven nations to qualify and, with points margins extremely close, their celebrations were on hold until all the protests had been dealt with, giving an anxious wait for Asenathi Jim/Roger Hudson. The pair spent much of the evening patiently sitting outside the race office waiting to receive the final nod, before they could really celebrate. Their story is impressive as the pair only teamed up together just over a year ago. Hudson admitted the day was tough, commenting, “we really struggled in race 4 and had a discard. We were having a great race 6 and picked up from about 9th in the first rounding to 7th and then had a disaster in the last run to finish 15th. It was devastating as we knew that could affect the outcome for qualification.”

For Asenathi today was a dream come true. “I am speechless to be honest, but I am really happy. We worked so hard to get here and this means a lot to me and shows the hard work we have put in. We are continuing to improve on the technical side of the boat and race faster." 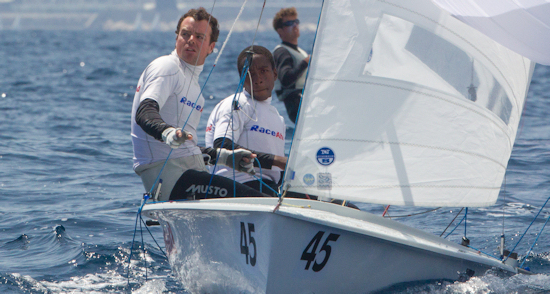 At the very front of the fleet a new 470 World Championship performance record was being set by the Australian dream team of Mat Belcher/Malcolm Page, who notched up another two victories to make it six race wins from six races. An unprecedented achievement, but the team remain respectfully modest.

When asked if he could recall any teams achieving the same scoreline, Page said, “I have been to most of the last 14 or 15 years of World Championships and I certainly know it hasn’t happened in that time. The way we are sailing this season, a lot of it comes down to preparing for the Games. We have also just had a great training camp in Australia which was hard. Victor had the whip out and it was hurting, but it certainly made us better for it.” 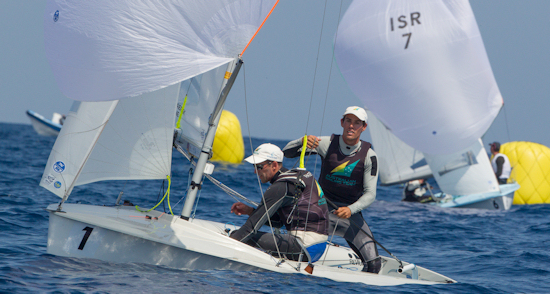 Portugal’s Alvaro Marinho/Miguel Nunes raced a 12, 1 to remain in second place behind the Australians. The Lindgren brothers from Finland, Joonas and Niklas, move up into third place and knock Sime Fantela/Igor Marenic (CRO) down into fourth.

The 470 Men’s fleet is exceptionally competitive with broad nation spread - the gold fleet itself hosts 24 different nations amongst the 32 teams.

With Olympic nation qualification wrapped up, most of the 470 Men teams can now focus on racing the World Championships, with the next marker being to make the cut to be within the top 10 teams going through to Saturday’s Medal Race.

However, within the gold fleet are several teams having their own battle against team mates to determine who will be selected for the Olympics, including Panagiotis Mantis/Pavlos Kagialis and Panagiotis Kampouridis/Esfstathios Papadopoulos of Greece and Ryunosuke Harada/Yugo Yoshida and Tetsuya Matsunaga/Kimhiko Imamura of Japan.