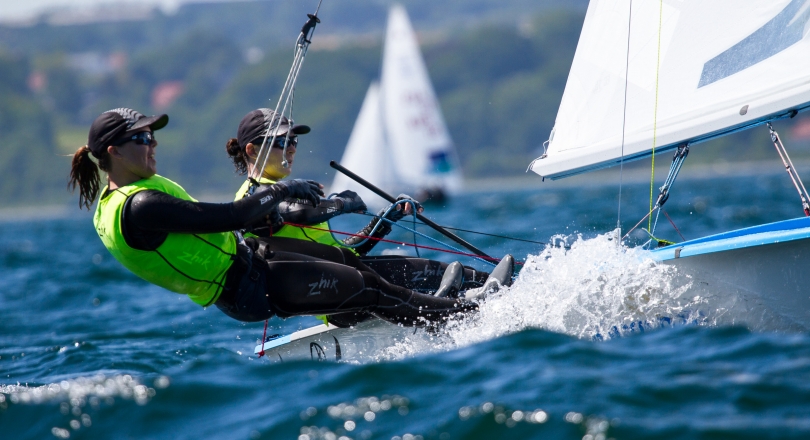 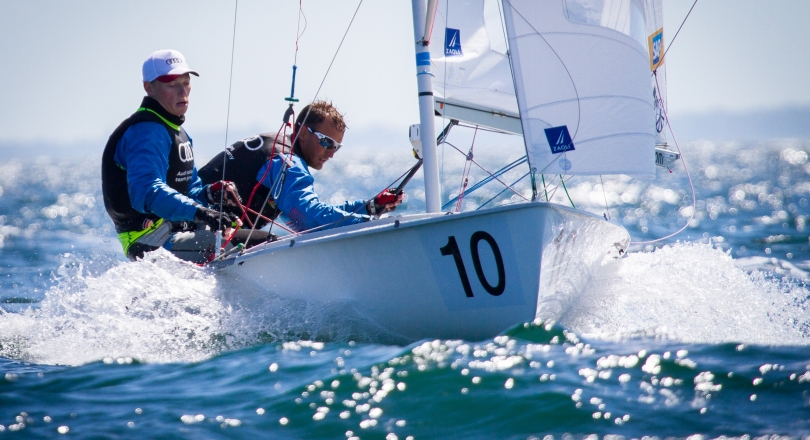 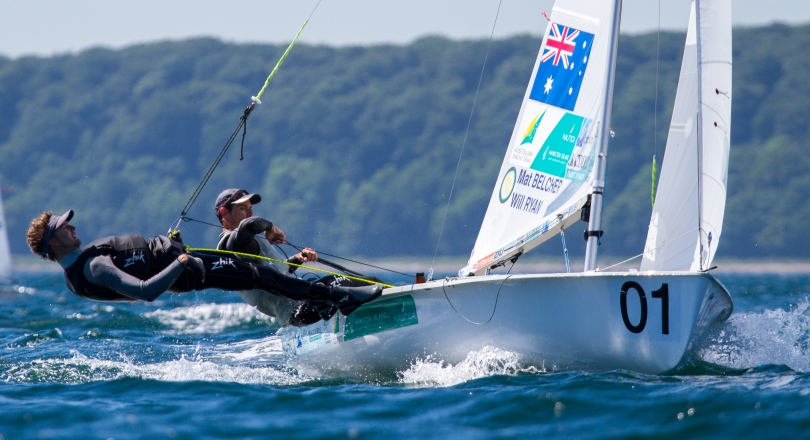 With the change of wind direction, teams really got to stretch their legs in today’s two races, as the breeze increased and a swell pushed through the course area.

470 WOMEN
The upshot of two race wins for New Zealand’s Jo Aleh/Polly Powrie is a 24 point advantage over second placed Camille Lecointre/Helene Defrance (FRA). Slovenia’s Tina Mrak/Veronika Macarol (SLO) move up to third, on tiebreak with the French. The teams behind are close on points and Friday's two races could be anyone's.

Aleh/Powrie nailed the first race of the day from the outset. They opted for a start in the middle of the line, and shot off claiming their lane early, to lead by the first mark over Sophie Weguelin/Elidh McIntyre (GBR). They extended on the reaching leg, maintaining superior speed over the chasing pack, crossing the finish line well before the British had even gone through the final downwind gate.

Powrie reflected on the day, “It was brilliant out there, really nice, really good sailing. Yeh, we had our tussles in the second one. It was a steady breeze and we worked hard to get around the track. We just went for a clean start and went from there.”

In the next race, the wind had shifted and the Kiwis shimmied up to start closer to the committee boat end, executing a superb start. But this time Weguelin/McIntyre carried the advantage to the first mark, and it was only after the second upwind leg that the Kiwis caught up. Going into the final gate they were neck and neck. The British found a puff of breeze and it looked like they might overtake, but the inside track advantage was with the Kiwis who held firm and crossed the finish a few seconds in front.

“As the breeze softened off a little on the second beat, we just worked really hard upwind and put in some good tacks, and we got them,” said Aleh. “They then went left round the gate, and we just had more pressure. It was a good battle though, they almost got us at the last downwind mark.”

Two second places to Weguelin/McIntyre positions them in 4th overall. Bar any penalty scores, the Kiwis have assured themselves of advancing to Saturday’s Medal Race inside the top three teams. A similar performance tomorrow as today, could potentially see them secure the Open European Championship title before the Medal Race.

Slovenia’s Mrak/Macarol also notched up their best day of racing, a 6,3, pushing them up into third overall. They claimed the bronze medal at last year’s 470 European Championship and are aiming for an improvement here in Aarhus.

“We had two nice races,” commented Mrak. “But in the first we had a small problem with the mainsheet block, but we still managed to finish 6th, but we were a bit angry as we lost a few places. In the next race, we didn’t have a good start but we managed to be up in the leading pack at the first upwind mark, and we are happy with our finish.”

Macarol added, “We want to repeat or improve on last year’s results, but with lighter winds, we will see. Everything is possible, so we will see.”

Israel’s Gil Cohen/Danielle Maman opened their assault on the Championship with four back to back wins, before struggling to maintain their form and plummeting down the leaderboard. Today they delivered some of their earlier magic and consolidated their position on the leaderboard to  within 10 points off the current Medal Race contenders.

Moving on up into the top 10 go Afrodite Kyranakou/Anneloes van Veen of the Netherlands,whilst Poland's Agniesxka Skrzypule/IrminaGliszczynska drop down. The Dutch scored their best day of the series, a 4, 6 and sit just inside the top 10 by 3 points. At the 2014 470 Open European Championships, the partnership qualified to the Medal race in 9th position and then literally swiped the field to seize the medal race win. The Medal Race door is again open for them tomorrow, along with in theory any of the other top 22 teams – it’s going to be interesting.

470 MEN
Overnight leaders Ferdinand Gerz/Oliver Szymanksi (GER) still wear the leaders’ yellow jerseys from their 4,12 scorecard today, but the points gap is closing in on them. Stuart McNay/David Hughes (USA) sit just 4 points behind, with Panagotis Mantis/Pavlos Kagialis (GRE) taking over in third.

Mat Belcher/Will Ryan (AUS) made the qualification series difficult for themselves, with a few high point results, but as to be expected they bring on the performance of the day when it counts, and their two races wins places them in fourth, just 1 point behind the Greeks.

“We were probably expecting a bit more breeze than actually we got. It’s been a difficult week for all of us," said Belcher. "For the top guys, the expectation and pressure coming into this event, means we all have to pull out some pretty good results. We are really happy. We put ourselves in a difficult position this week, but we have come back from some pretty difficult circumstances over the years. We have to produce some pretty good results and we don’t have any other options. We did our discard pretty much on day 1, so tomorrow we just got to keep getting the best scores we can and hopefully can close the gap as much as possible.”

This morning, before today’s racing, defending European Champion Luke Patience (GBR) said he was poised to attack. He and crew Elliot Willis did just that in the first race of the day, finishing 6th, but a broken jib halyard in the next forced the team off the race track to count a DNF (did not finish) penalty score. They are still well in touch with the leaders, and will be back to fight another day.

Panagotis Mantis/Pavlos Kagialis (GRE) raced in complete contrast to Wednesday, when the team continually chose the wrong side and knocked out two double digit scores. Today they thrived.

“It was a tough day, but really nice sailing conditions,” said Kagialis. “We had a good start in the first race and from the beginning held onto 2nd place. A bad start in the next race, but we put in some tacks after the start, and had good speed, so caught up.”

The pair are already selected to represent Greece at this year’s Rio 2016 test event, but uncertainty over their nation’s economic situation may impact their funding to compete.

Series leaders, Ferdinand Gerz/Olivier Szymanksi (GER) raced a 4,12 scorecard, which keeps them 4 points ahead of the Americans, but the pack are closing in as points between the leading teams compress.

“We tried to do our best and we did it, so we are happy with our day,” said Gerz. “ The second race could have been a bit better but we are happy with it. The conditions were really nice and very physical. Today was quite hard.”

Japan’s Kazuto Doi/Kimihiko Imamura made the biggest leaderboard climb, from results of 3, 15, moving up five places to 9th overall. With Olympic selection on the cards here, they need to make an impression. Team mates Tetsuya Matsunaga/Yugo Yoshida sit two places ahead in 7th overall.

In the 470 Men silver fleet, Jordi Xammar/Joan Herp (ESP) have taken over the lead with two 4th places, chased by the brother partnerhips of Julian Autenrieth/Philipp Autenrieth (GER) in second and Joonas Lindgren/Niklas Lindgren (FIN) in third.

About the 2015 470 Open European Championships
The 2015 470 Open European Championship is  organized by Sailing Aarhus and hostd by the Aarhus Sailing Club and Sailing Club Bugten. The event is partnered by the City of Aarhus, Sport Event Denmark and Danish Sailing Association.  In 2018 Sailing Aarhus will be hosting the ISAF Sailing World Championships together with the City of Aarhus and Sport Event Denmark. The racing format is an 11 race series scheduled for the 470 Men and 470 Women fleets, with 5 qualifying series races and 6 final series races. The top 10 teams will then advance to the final Medal Race on Saturday 4 July 2015. 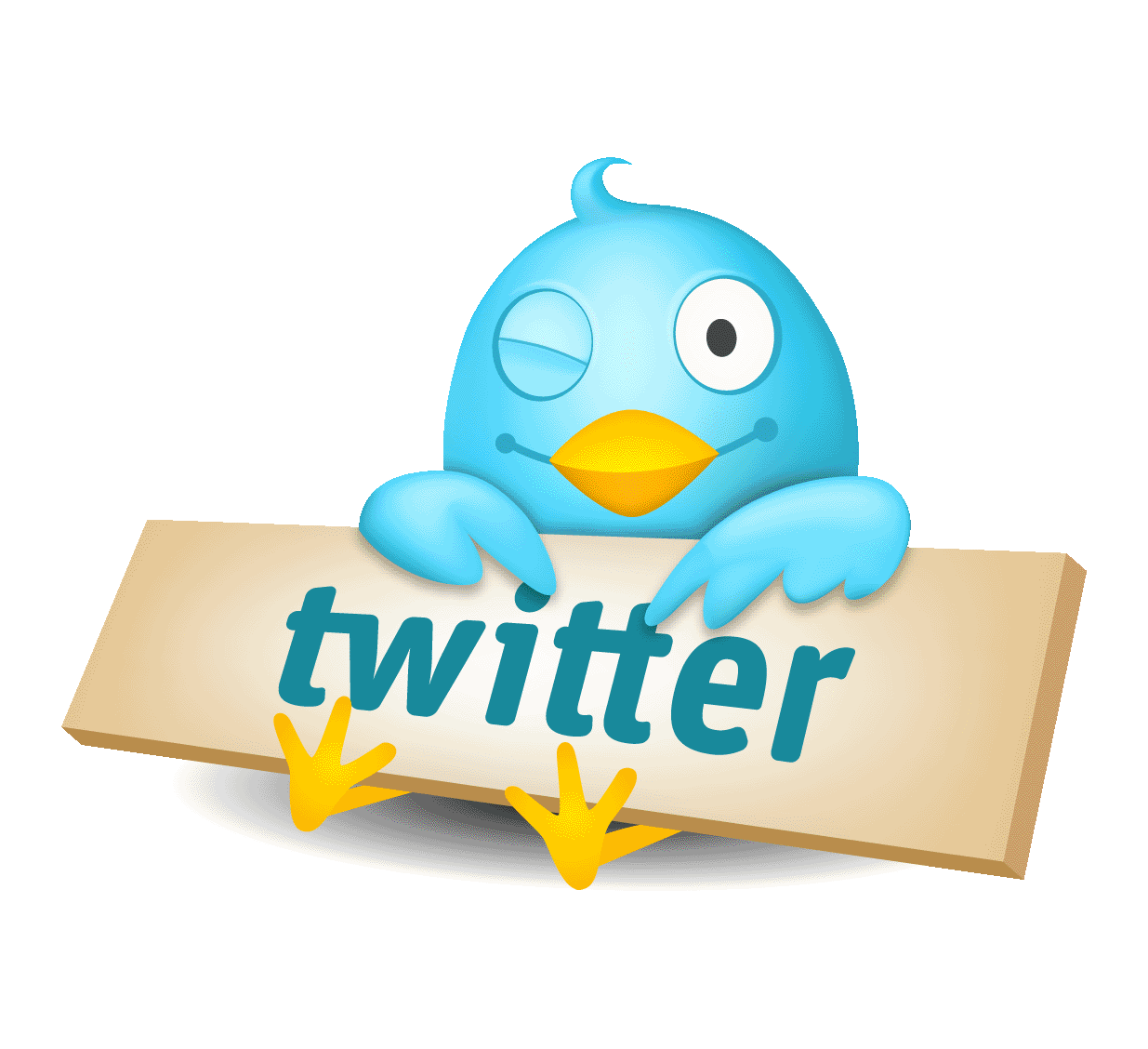 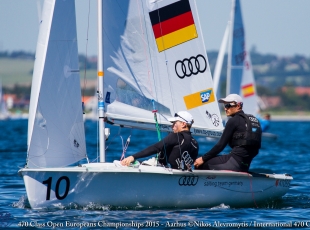 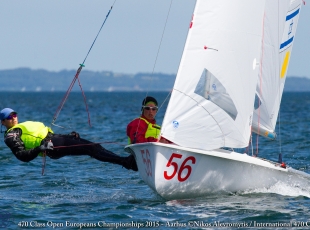 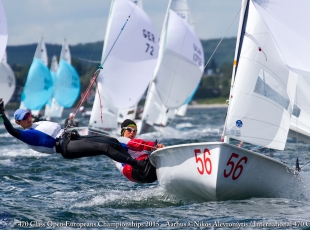 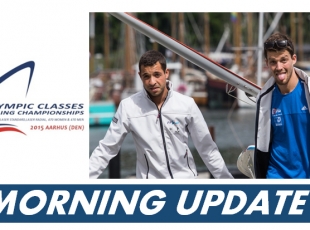 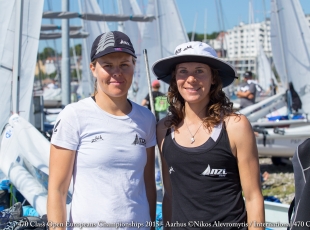 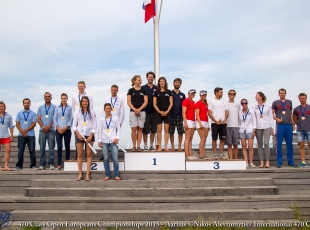