No Wind Gets 470 Sailors Talking Sails 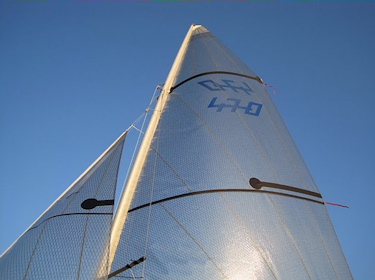 The first day of competition at the 2010 Open 470 European Championships in Istanbul was hot and windless, with the 92 boats never even getting afloat. Three races are scheduled for Wednesday by the Race Committee in a bid to get the qualifying stage of the regatta underway. It was a disappointing first day after some beautiful windy days in the build-up to the regatta. Then again, there are worst places in the world to while away the time than in the plush grounds of Istanbul Sailing Club. 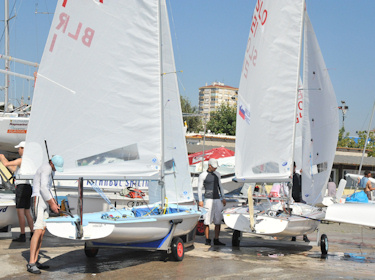 “Everyone is really chilled out,” said Joonas Lindgren from Finland. “It’s hard to get motivated after waiting around during the day, but people have just been hanging out together and talking.”

Sailors have been talking in particular about the first set of composite sails built for the 470, a class which currently only allows Dacron sails. The new set of Technora sails have been built by North Sails Japan, and are just one of a number of technical developments being trialled by the International 470 Class.

Class President Stanislav Kassarov explained the reasons behind these new sails and other projects in development. “As the 470 Class moves forward to the 2016 Olympiad, we want to ensure that the Class has evaluated and trialled a range of options to ensure the 470 remains at the forefront of everything an Olympic Class should deliver technically. Our class project team was confident that we don’t want to change the hull of the 470, but there are other areas that we are looking at, the sails being one of them. We are also testing a two-piece mast, with a prototype already made by SuperSpars. A two-piece mast would mean reduced container costs because sailors would then be able to fit the mast with their boats into a 20-foot container.

“We have also had some new foils made in the USA, a centreboard and rudderblade, longer and narrower than the current foils,” added Kassarov. 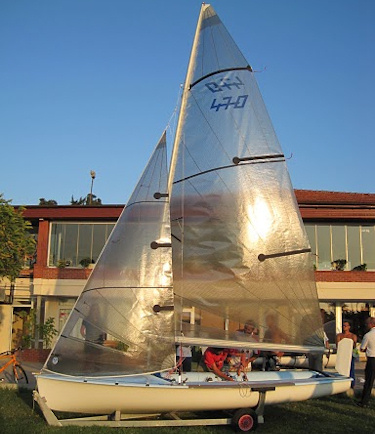 A series of trials of the new equipment will begin soon after the European Championships, with the project team making its final decisions next spring. “We may conclude that we have a really good boat in the existing 470, and that nothing needs to change,” said Kassarov, “but it is important we at least try these new ideas so that we know for sure.”

Kassarov added that it was important not to make the many thousands of 470s around the world obsolete. “For example SuperSpars have proposed a two-piece mast system which they say could be retrofitted to existing one-piece masts,” he said. “Fundamentally we have a strong class already, so we don’t want to upset a formula that is working well, but at the same time these trials might widen the appeal of the 470 even further.”

Joonas Lindgren said he liked the look of the new sails but was sceptical about whether they might last as long as Dacron sails. “My friends who don’t sail, whenever they watch sailing on TV, all they notice are the sailors and anything above the deck,” he said. “The Dacron sails, white sails, really don’t look too good, especially after they have been used a few times. I think these new sails would definitely enhance the media appeal of the 470 and would make it easier to put on sponsor logos on to the sails. My only concern is how long they would last. If they last as well as the Dacron, and are about the same price, then I would like to see them adopted by the class in the future.”

Back to the near future, and the weather forecast for Wednesday shows the temperature in Istanbul dropping, some rain falling, but most importantly, the wind increasing. So the hopes are high for completing three races.

470 European Championships take place from 31 August conclude with the Medal Race on 6 September. The regatta is organised by The Istanbul Sailing Club in co-operation with the International 470 Class Association and the Turkish Sailing Federation.