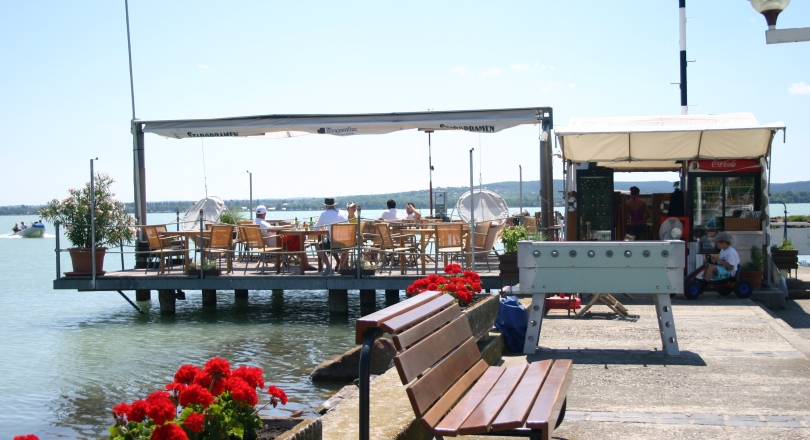 Thirty-nine teams representing nine nations have gathered in Tihany, Hungary for the 2015 edition of the 470 Masters Cup.

This news belongs to
2015 470 Masters' Cup
ALL EVENT INFORMATION

Hosted by the Yachting Union of Tihany in co-operation with the Hungarian Yachting Association and International 470 Class Association, the Masters’ Cup is being held at  Tihany, from 2-7 August 2015.

Located at, Tihanyi Hajós Egylet, the venue is one of the most picturesque spots of Lake Balaton, on the peninsula of Tihany.

Apprentice Masters: eight teams are contesting the Apprentice Masters fleet, which requires one of the crew to have attained hes/her 30th birthday and the combined ages of the two members must be  more than sixty years before the end of the year in which the Cup is sailed.
The top placed team from  2014 returning for another shot at the title are Germany’s Max Pleger/Beatrice Badouin, who finished 4th last year. They will be joined by three other German teams, along with teams from Greece, Hungary and Israel.

Masters: the most popular of the age categories in terms of number of entries, 15 teams from Germany, Greece, Hungary, Italy, Romania and Switzerland are in contention for the Masters fleet. One of the crew must have attained his/ her 35th birthday and the combined ages of both crew must be more than seventy years before the end of the year in which the Cup is sailed.
The top placed team from 2014 making an appearance in 2015 are Romania’s Bujor Rosca/Mihai Nicolae Fagarasan Manciu, who placed fourth last year.

Grandmasters: Ten teams will face off in the highly competitive Grandmasters line-up, which requires one of the crew to have attained his/ her 50th birthday and the combined ages of the crew must be more than one hundred years before the end of the year in which the Cup is sailed.
Picking up the bronze medal in 2014 were  Joachim Oetken/Stefan Oetken, and they are back to try and improve on last year’s finish. Joining them are 9 other teams from France, Germany, Hungary and Italy.

Grand-Grandmasters: featuring the most distinguished sailors in the 470 Class in terms of years is the most senior Grand-Grandmasters fleet. One of the crew must be aged sixty years or more, and the combined ages of both crew must be more than one hundred and twenty years before the end of the year in which the Cup is sailed. Two of last year’s contenders have returned to resume battle in 2015, with Spain’s Jose Santiso/Jose Perez and Switzerland’s Hubert Kirrmann/Verena Kirrmann. In 2014, the Kirrmann’s picked up the silver medal, holding the over their Spanish friends – we wait to see how the story will unfold here in Hungary.

Race Schedule
Saturday 1 and Sunday 2 August feature the Olimpic Regatta race series, along with equipment inspection and registration. The Masters’ Cup formally kicks off on Monday 3 August, with eleven races scheduled over five days of racing.

The weather for the week ahead is set to be hot, very hot and a breeze of 6-13 knots currently forecast for the days ahead. Find out more on our Weather page.