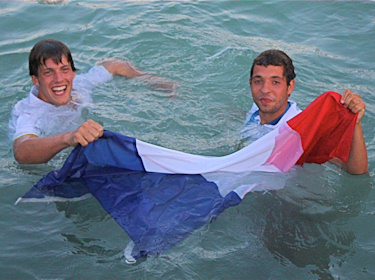 Today, in the practice race of the 470 Junior European Championship in La Rochelle, the only winner was the tide. While some teams were completing measurement checks, 60 of the 88 entries went out to compete in the warm-up race, which took place in light to moderate north-westerly winds under beautiful sunny skies.

However, as is often the way with practice races, the fleet was eager to get going and with the majority jumping the gun, the race committee fired a general recall. “Only one boat returned when we flew the general recall,” smiled Alain Corcuff, the principal race officer, “and that boat started correctly on the second start, but he didn’t cross the finish line. So we have no winner today.” Sailors are superstitious bunch at the best of times, but when it’s Friday the 13th, maybe winning the practice race really would spell bad luck for the rest of the regatta. Better to be safe than sorry.

Things will be very different tomorrow, though, when the real racing gets underway. With the event limited to sailors aged 21 or under, the 88 teams from 22 nations take their racing very seriously. For Jérémie Mion and his helmsman Sofian Bouvet, this regatta represents their swan song after a very successful junior career in the 470. Ranked 15th on the ISAF World Rankings, this is a team that probably should have been competing in Weymouth at Skandia Sail for Gold Regatta, but they made La Rochelle their priority. “We are doing this championship because this is our last youth championship and we want to win it again, especially because it's in France,” said Mion, who with Bouvet is the reigning 470 Junior World and European Champion.

“We wanted to be in Weymouth as well, so it was a hard decision but we like youth championships and it is good training to try to win a regatta,” added Mion, acknowledging his status as the pre-regatta favourite. “It is never easy to win, and we know that everybody is expecting us to put in a good performance, but this is a pressure that we have to control.”

Victoria Jurczok was not sounding so confident of defending her girls’ title, which she won with her crew Josephine Bach at the 2009 470 Junior Europeans at a light airs regatta in Lake Balaton, Hungary. “I think we have a chance of winning in light to medium airs,” said Jurczok from Berlin. “But we are expecting stronger winds in La Rochelle, and we are quite light and still not that experienced in the 470 in stronger winds.” She thinks her training partners Annika Bochmann and Anika Lorenz will be a stronger bet for bigger breeze. “I will be happy as long as we win or they win the championships,” said Jurczok.

One team looking to get in amongst the top few contenders for the girls’ trophy are the Spanish crew Elia Borrego and Nora Brugman. Although this is their first year in the 470 after moving up from the 420 class, the Spanish are part of a strong squad which trains out of Barcelona, and which has had the benefit of some coaching from Spain’s top 470 stars on the Olympic circuit. “Our first aim is to qualify for the gold fleet,” said Borrego, “and then to see if we can finish among the first four or five girls’ teams.”

The young stars of this fleet will go on to become the stars of the Olympic circuit in years to come. Some of the sailors in La Rochelle have grown up with Olympic success. French sailor Kevin Peponnet, for example, is the nephew of 1998 Olympic Champion in the 470, Thierry Peponnet. Eilidh McIntyre’s father, Mike, also become Olympic Champion in 1988, winning a gold medal in the Star class for Great Britain. Local sailor Mathieu Fountaine is continuing a strong family tradition of 470 racing. His parents, Claire and Jean Francois Fountaine, sailed very successfully together as a mixed crew in the days when 470 sailing was almost exclusively a male domain. Together Mathieu’s parents won a pre-Olympic regatta in Canada in the mid-70s. Now it is Mathieu’s chance to prove his own abilities in the 470, racing out of his home club of the Société des Régates Rochelaises in La Rochelle.