Race day 2 at the 2012 470 European Championship produced a change of conditions and a change at the top of the leaderboard. Yesterday it rained, today things turned torrential and lasted longer. 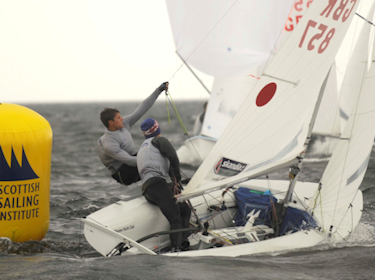 The wind at least improved to a more amenable 15 knots south-easterly.

470 Women
The performance of the day goes to Slovenia’s Olympic team, Tina Mrak/Teja Cerne, who scored two race wins to move up into first overall having taken the advantage from the start.

Cerne was pleased with their day, commenting, “We did two good starts and at the first mark we were in front, so it was not too hard to hold it and finish. Today we liked the conditions more, as we like sailing in strong winds and have done a lot of training in Weymouth so are used to this. But, it is more difficult to sail in these conditions as you can’t see the marks and have to focus even more – much harder than when it is sunny.” 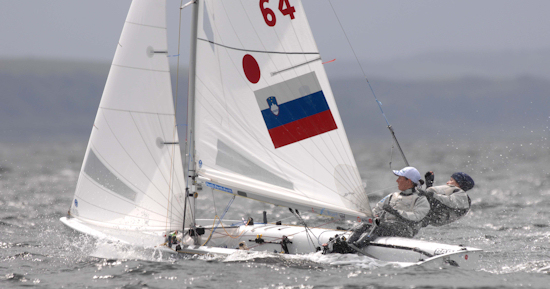 The pair were disappointed that the scheduled race 4 did not take place in their preferred conditions, but Cerne concluded, “tomorrow is another day.”

Annika Bochmann/Elisabeth Panuschka (GER) raced a solid 2,7 and hold firm in second place, but just one point separating them from Sophie Weguelin/Sophie Ainsworth (GBR) in third.

It is early days, but interesting to see the leading four boats have already secured themselves a points separation from the rest of the pack.

Diana Kissane/Saskia Tidey from Ireland are the newest team combination competing at the 470 Europeans, only joining forces in September 2011. They have improved their OCS in race 1, to post an 11, 14 today. It could have been better as Tidey explained, “We had a good day today, much better than yesterday. We were just aiming for clear starts and getting to the right side of the course with a fast boat. We had a bit of an unlucky day, but it doesn’t reflect on how we were sailing. We had two capsizes which just shows we were trying.”

Kissane, continued, “I guess there was a lot of breeze out on the course today. We were giving it loads down the run and had a couple of death rolls, but we are learning and we are pleased. It was so tantalizingly close, as we were higher up the fleet, but then in one race capsized with the line in sight.”

470 Men
A British handover at the top of the 470 Men fleet after today’s two races, with Ben Saxton/Richard Mason claiming the yellow jersey from team mates Philip Sparks/David Kohler. Whilst the event is only four races in, consistency is the name of the game and Saxton/Mason are the only team to have produced all top 10 finishes so far. Conditions seemed to suit the British pair who were seventh and first in the day’s races. 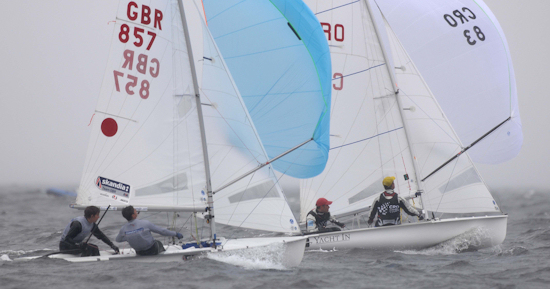 “The wind was from a more steady direction today, less shifty, though saying that the first race it wound right on the first beat and we managed to go left,” said 22 year old Saxton with a wry smile.

“We had a nice comeback, flying past boats to get a seventh which was cool. The only thing that would have made us do better was another lap.

“In our second race we came first so we were happy. We started simple, sailed with the fleet and got faster, and it worked. I enjoyed it - it’s always nice to win.”

A touch of nervousness tonight though as they faced a protest from the Russians, Mikhail and Maxim Sheremetyev, after a boat to boat incident in race 3. But after hearing evidence from both parties, the International Jury dismissed the protest.

Leaderboards can change in a moment, and it did just that today for the Cinar brothers, Deniz and Ates, from Turkey. The pair were not quite masters of the wind in race 3 finishing 15th, which was followed up by an OCS in race 4. A resulting tumble down the leaderboard pushes them from second to thirteenth overall.

Moving up into second are the defending 470 European Champions and recently crowned bronze medallists at the 2012 470 World Championships, Sime Fantela/Igor Marenic. Marenic explained their day, “Another wild day in Largs, with heavy rain and many changes in the wind. We were 11th and 2nd today, and were not happy with the first race, and even in the second race we could have done better. We were leading, but we could not see the mark because of the rain.”

Smiling, Marenic concluded, “But the conditions are the same for everybody. We are second overall, and the Championship has just begun, with nine more races to go.”

The Swiss Olympic team of Yannick Brauchli/Romuald Hausser end the day in third.

Yesterday, Canada’s Olympic team of Luke Ramsay/Mike Leigh complained of their light wind achilles’ heel which gave them a 13, 19, in contrast to today’s 2,3 posting. Pleased with their day and move up to 8th overall, Ramsay acknowledged, “We just need to sail like this in all conditions!“